The two young  game companies Greater than games and Dice Hate Me games, that merged in 2015, just launched a successful kickstarter campaign currently over 300% funded – New Bedford : The Game of Historic Whaling & Town Building . GHG talked to the artist behind it, Nolan Nasser. 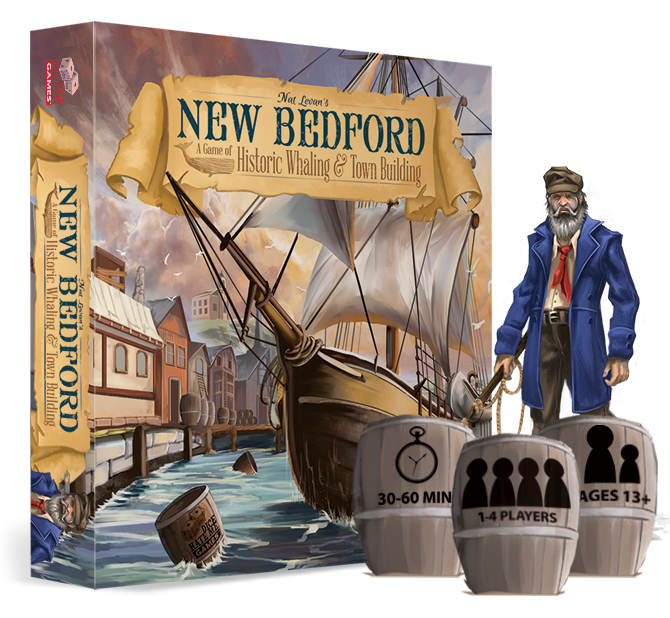 New Bedford seems to ride a whale of fans.. um wave, but this was not always the case. In 2014 a kickstarter for the New Bedford game was pulled. There was apparently many reasons for this, but one we took special notice of the words from the game designer Nat Levan in his designer notes:

Having a good sample of final art is crucial to attracting backers. The art is often the first impression your game makes, so make it count.

But this time it seems like lessons has been learned. And the art is definitely working out great. So lets hear some words from Nolan – who is , as he put it : ” from the land of ice and snow, otherwise known as Michigan, USA”.

Tell us a little about yourself and your (artistic) background?:

My original inspiration was my uncle, Michael Netzer, a comic book artist for DC in the 70’s. He inspired me to start drawing when I was really young, and I kept it up all the way through highschool. Once I got to college, I switched my focus to web design, thinking it would be more lucrative than art. In my last year, I realized that I still truly wanted to be an illustrator, so I picked the pencil back up, practiced for endless hours, taught myself how to paint digitally, and now here I am.

Honestly, connections. My work is at least 50% marketing, which includes getting to know people in the industry and making friends. A good friend sent me a call to artists from Greater than Games two years ago, and I applied! 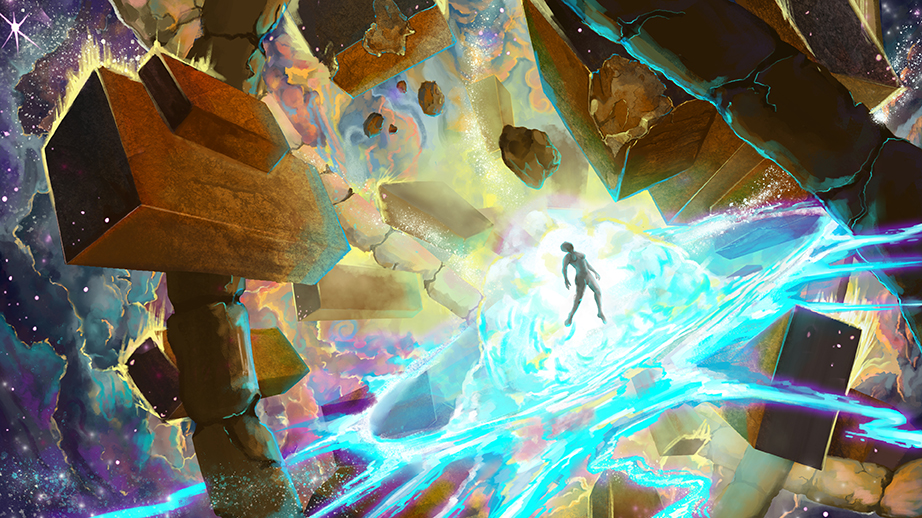 What other things(books, games etc) have you worked on?:

Before GtG, I worked for TCGplayer making these little parody portraits of their writers as zombies and vampires. I also do illustrations for a small start-up gaming company, 2cGaming. http://www.2cgaming.com/tpk-handbook.html Lastly you’re the first to know about this, but I possibly have a piece or two coming up with AEG for the next Legend of the Five Rings set.

Oh yes, I work in both. I do a lot of sketching in my moleskine, but I spend most of my time hunched over my desk painting away at my Yiynova(It’s like a knock off cintiq except better).

What is your favourite tools software & hardware?

If you had to make me choose, I’d say my favorite tool is a Hammer. It’s the most versatile and can fix anything mechanical. But in all seriousness,  my favorite tool aside from the Yiynova is a 4h pencil and a moleskine. Software is all photoshop, mostly because I’m too scared to try Painter even though I’ve seen the results it can produce.

Yes – we can all agree that Corel Painters interface can be intimidating. Describe your workflow – from you initial thought/brief to the end.

Oh man, my workflow? I always start out with sketchy line drawings or thumbnails. After that I find references and research inspiration for the piece. Then I start painting, laying down color and getting the lightsource. After about 4 hours into every painting I start hating it. I curse my paintings under my breath, swear I’ll never amount to anything if my paintings look this crappy, and usually storm away from the computer a few times. Then 20 hours later the painting looks half-way decent and I’m moderately content. I stand by the theory that if I don’t hate my work at some point, it won’t turn out well. It’s a crucial part of my workflow.

I stand by the theory that if I don’t hate my work at some point, it won’t turn out well. 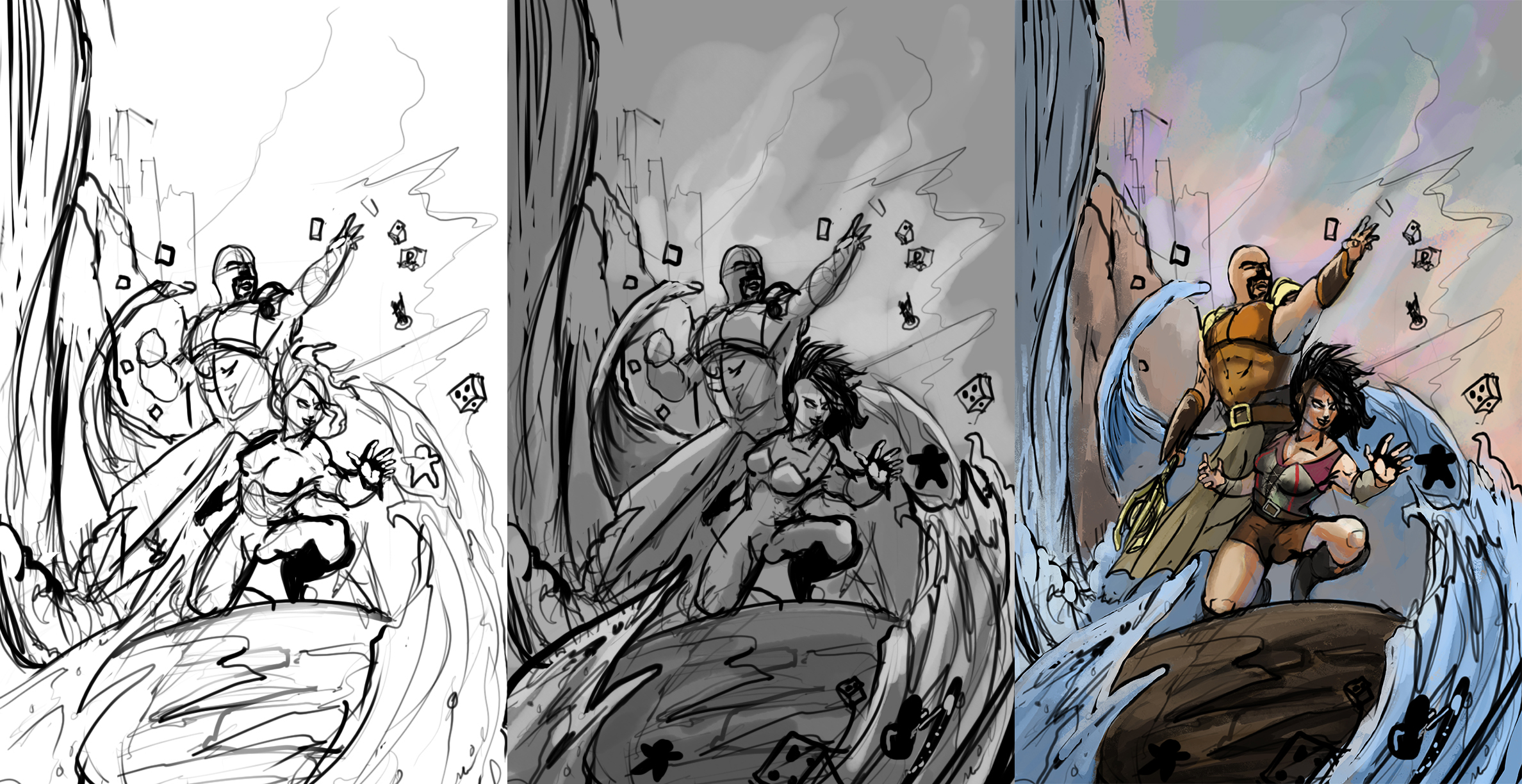 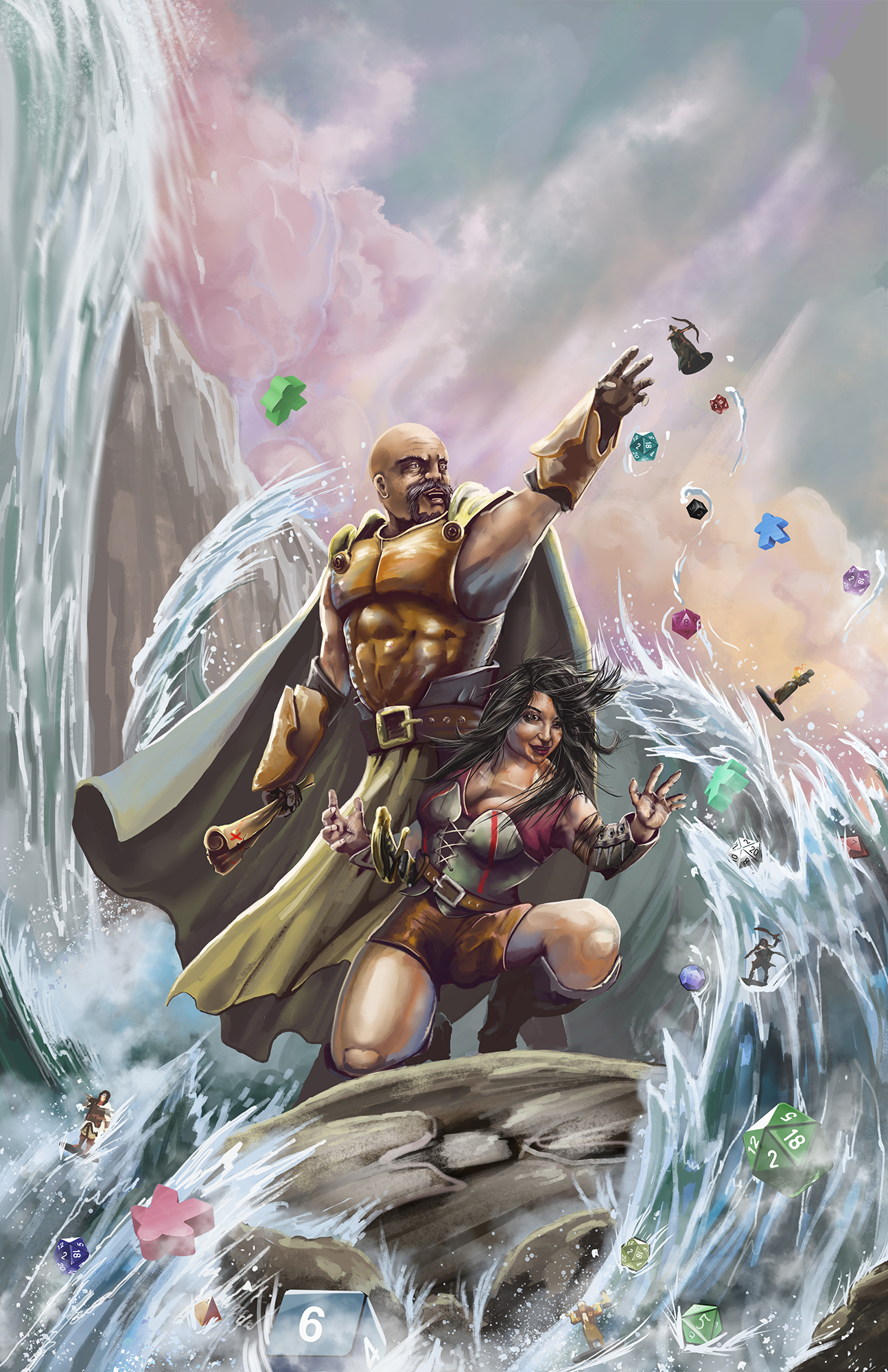 In your recent work on New Bedford, where you given detailed briefs on what to create or was it more loose and open briefs?

A little of both actually. The game is rooted in history, so GtG did an amazing job preparing as much historic reference material as possible. However I was still left plenty of freedom, which was a huge honor.

This project was pretty chaotic, given that we had roughly 4 weeks to complete the artwork, but it has been amazing working with an incredible company like GtG. Oh, not to mention the community outreach!  GtG was amazing and posted my paintings on BGG pretty early on, then came back to me with the community’s input, and we made changes. That’s a big deal!

GtG was amazing and posted my paintings on BGG pretty early on, then came back to me with the community’s input, and we made changes. That’s a big deal!

Specific techniques maybe not, but tools wise there’s definitely some tools I constantly use. For example, I use a custom smudge tool  in Photoshop that I think comes in handy for blending and rendering.

We can see on your personal portfolio that colors is one of your strong points. How do you choose colors?

Ah, I love this question because the answer is so anti climactic. Honestly, I don’t have a strategy other than being influenced by other artist’s color compositions. It’s one of those things that I think sort of develops over time.

Oh another good question. I work on anywhere from 3 to 20 layers at one time. Usually in the early stages I work on 3 layers- middle, fore and background. By the final image I have those same 3 layers plus 17 more for effects!

What do you find most difficult?

Stepping out of my comfort zone and practicing. I believe I’ll never be done learning how to be a better artist, but making time to practice is one thing I struggle with.

What is  your favourite kind of illustration job?

Honestly, I love doing my own personal work because of the creative freedom. As challenging as it is though, I also enjoy helping other people’s visions come to life.

The artists I follow the most are Noah Bradley for landscapes, Darren Geers and Pete Mohrbacher for characters. Kekai Kotaki for all of those things.

Absolutely, I was a tabletop gamer before an artist! I personally love card games and worker placements. Before New Bedford, Lords of Waterdeep was one of my favorites. My girlfriend is a savant at 7 wonders and beats me like 90% of the time that would have to be my other favorite just because she enjoys playing it so much.

Any words of wisdom you could on board game art or being an artist?

Never.Stop.Working. It’s a grueling industry to get into, but if you put in the upfront time and invest those 10,000 hours, you’ll see results no matter what. That goes for anything really. If you want to do something, put the time into it. You’ll get results if your heart is in it and you work hard enough for it.

Regarding being an artist, I cannot stress how important networking and marketing is.

Ah, this is a super awesome question! I have a good friend who’s making a comic and launching a kickstarter for it soon. It’s called Durontus, and yes it’s an awesome kaiju comic. https://twitter.com/Killustration He’s made a couple other indie comics that I absolutely adore, and he’s a huge inspiration to me. He and his wife have been kicking ass at being self published comic book artists all while raising two kids. I’ll actually be doing the colors for the cover of his upcoming comic, and I’m really looking forward to it!

Thank you Nolan for sharing your story. If you girls n guys out there have any wishes for future questions please drop a comment below.

Here is a couple more paintings from Nolan. 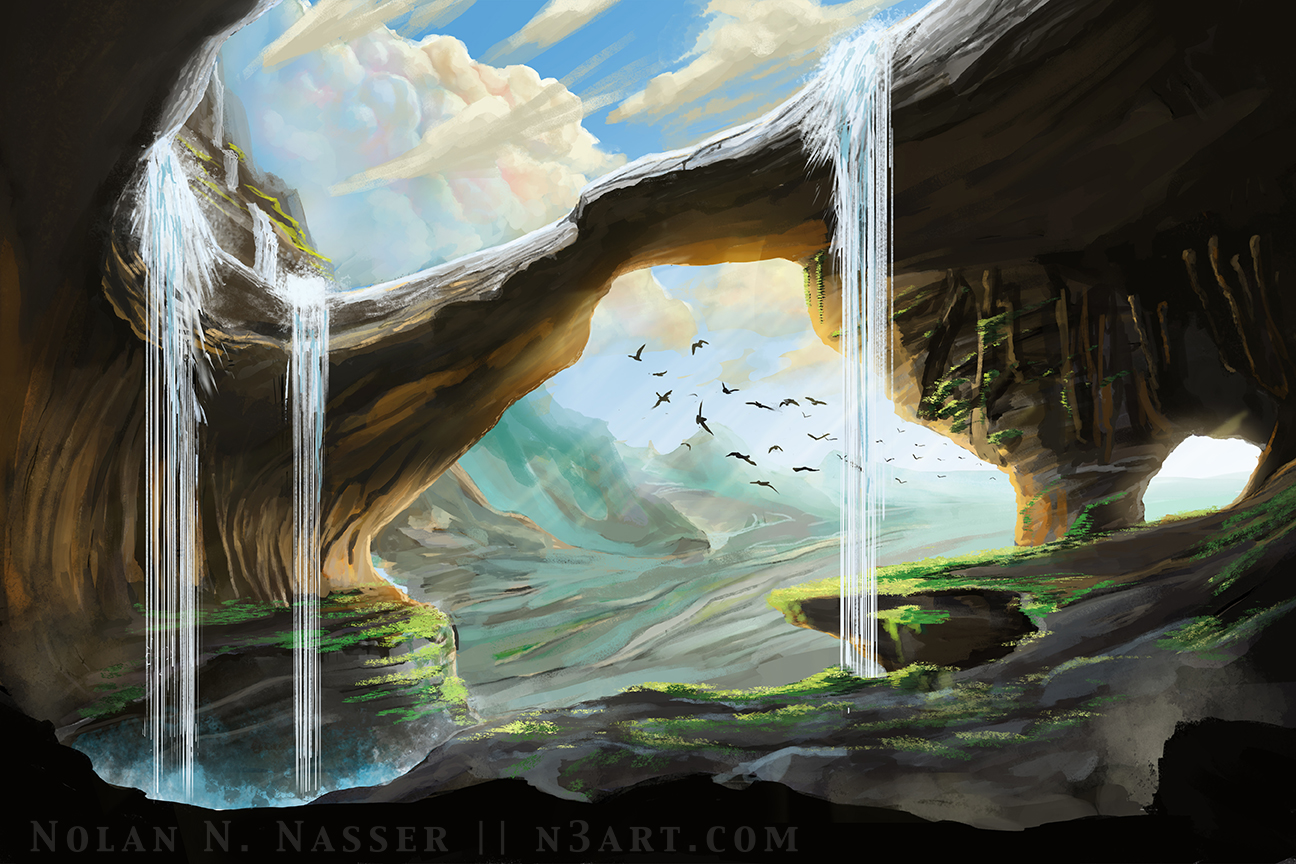 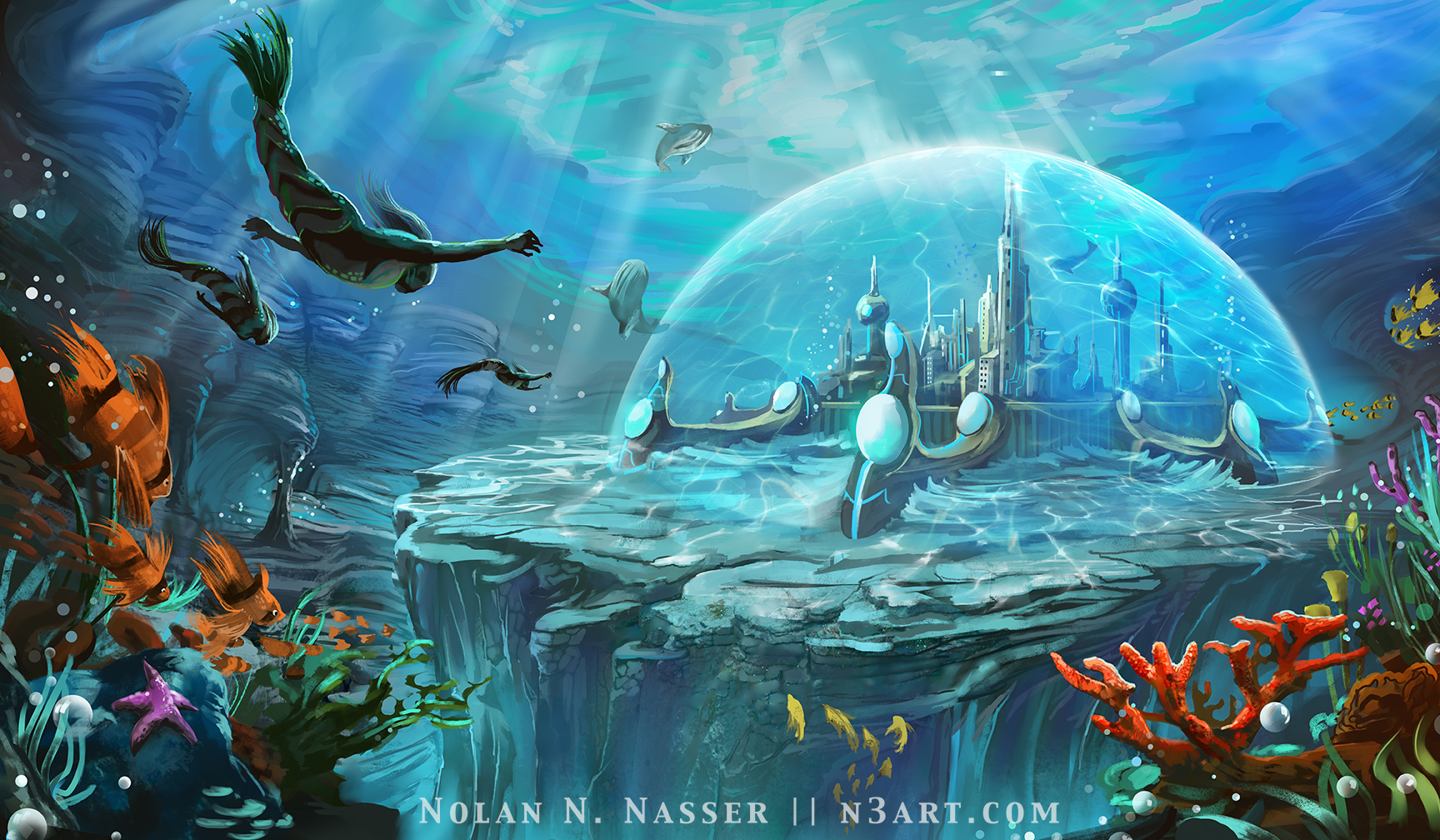 2 thoughts on “Whale art – Interview with Nolan Nasser. The artist behind New Bedford.”