Some people just repeatedly make innovative, interesting and beautiful stuff. Todd Sanders from Pittsburgh, Pennsylvania is one of them. As Scott Allen from Narrow Gate Games recently said in a BGG thread – Well, you can’t be good at everything Todd. You’ll just have to settle for concertina bookmaking, and game design, and graphic design, and woodworking. Todd is a big name in the indie Print And Play board game community. For most of the games he makes, he creates art on his own – leaning to his graphic design experience. – and I am thrilled to present an interview with him to you here.

Well, you can’t be good at everything Todd. You’ll just have to settle for concertina bookmaking, and game design, and graphic design, and woodworking 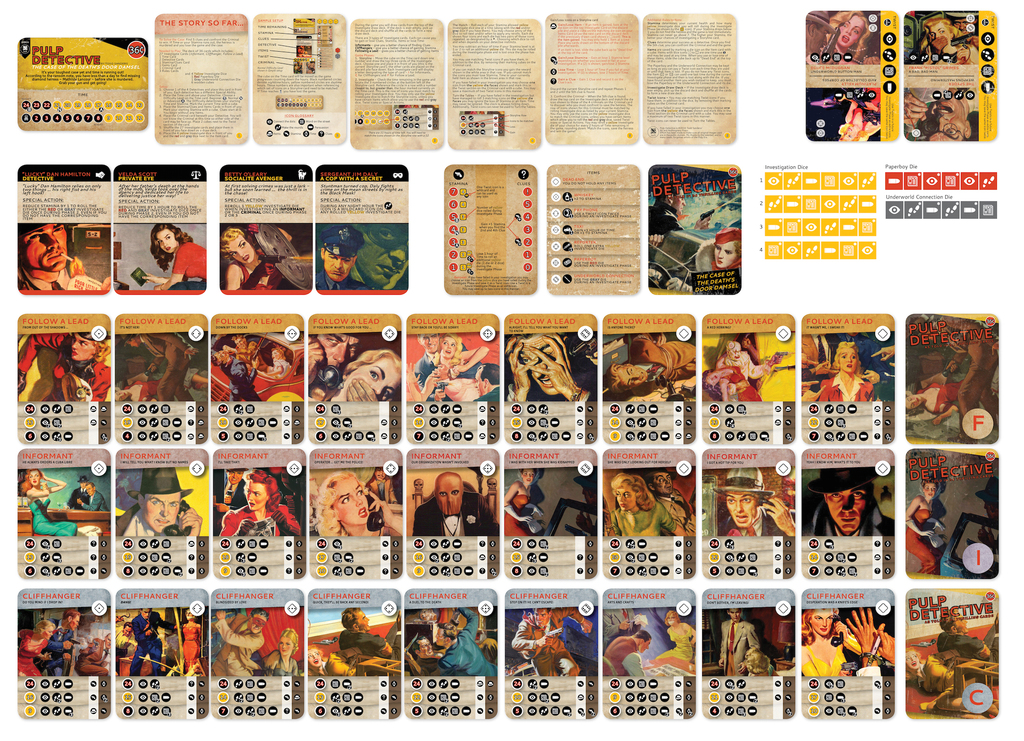 You are are a craftsman, thinker and seem to have an eye for minimalism and aesthetics in all you do. Tell us a little about your artistic background and how you got into making art for board games?

Being described as a thinker is a new one. Thanks for that. I studied in college to be an architect and worked as an architectural designer for a couple of years. For the last 20 or so I have been a graphic designer and book maker. I got into board game design about 6 years ago, first redesigning the artwork for some games I had in my collection as well as older games that I took on the challenge of doing a makeover for and then progressed to my own game designs. I suppose the minimalism comes from my former training as an architect.

You are very active in the board game community and participating in a lot of competitions and your own PNP projects. Several of your games has been picked up and published long after you released PNP’s – recently games like  They Who Were 8 , Mr. Cabbage Head and IUNU. Which game has been your biggest creation and have you ever worked as artist on other designers games?

I think Mr. Cabbagehead’s Garden Game is my most successful game to date (though I am quite partial to The Tain and Serica). Mr. C. really seems to strike a chord with other gamers and has been embraced by solo players. Somehow the mechanics and theme for that game clicked quickly. I have been extremely lucky and grateful to LudiCreations for their interest in my games and I work with them as a graphic designer. I also have collaborated with Terra Nova Games, Alban Viard and a few other game designers. I am eager to continue my relationship with Alban and LudiCreations.

I think Odin Quest is another very strong game of mine. the artwork for that was about 4 or 5 months in development, creating a combination of vector and collage artwork for all the cards. 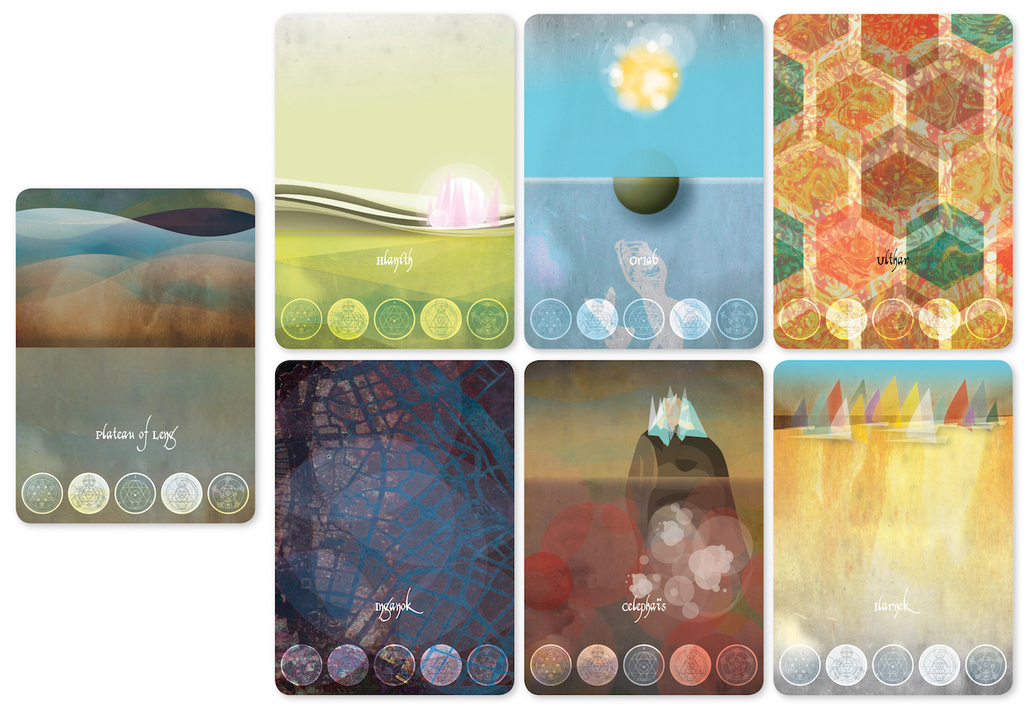 Updating PNP files and working on games as designer and “designer” must be really time consuming. How do you weight you time between game development and art development and how do you think your graphic design affect you games?

I am lucky in that I am a freelance designer so I have time to devote to interests I am passionate about. So I read and study and go about day to day but i am always thinking about game design as I do that.

How early in the process do you start designing art for your games?

It begins right from the start. My training as an architect taught me to work through a problem visually. I don’t ‘sketch’ per se with a pencil and paper. I pull images and create vector pieces directly in InDesign. Often this means my work looks much more finished than it actually is. It is all rather fluid and organic – build mechanics for the game along with the theme and artwork to grow the finished design. 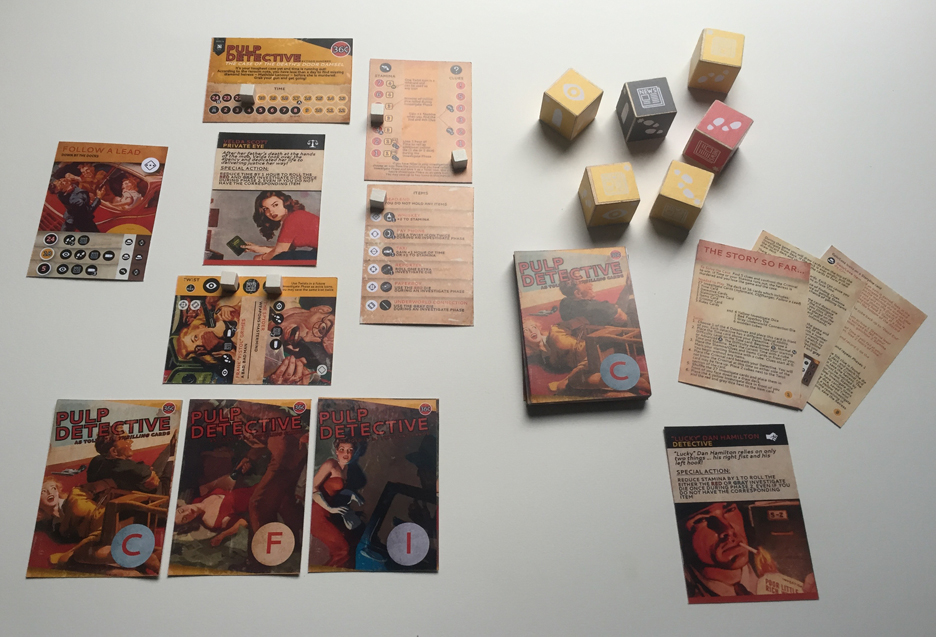 Can you tell us about your creative process when making a piece of art from idea to final print?

Often I get an idea for a game right before I fall asleep. I keep a design notebook next to my bed and scribble ideas down and whatever key mechanic or mathematical idea that will tie the game together. For Ragnarök: Aesir and Jötunn this was the number 9. For Mr. C. it was the idea of unique numbers for initiative and the garden grid system and adjacencies. For Court of Xiang Chi it was an idea of cards layering over others in a grid and how they would react with each other. All of my really good games are a-ha moments and take about 30 minutes to develop the core idea. 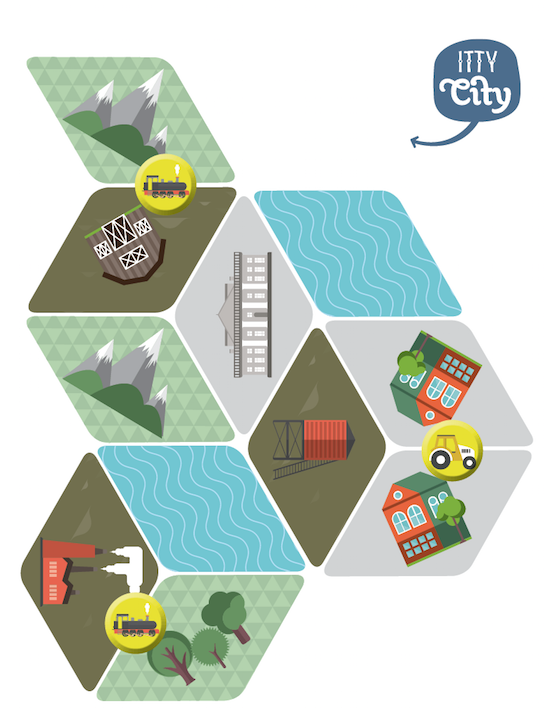 I then spent the next few days plotting out the cards and artwork while refining the mechanics and trying to support them with the theme and artwork.

This continues and progress shots are posted to my design forum on BGG and other join in the conversation. Eventually the game is good enough to release to others and see what they think. Comments from players are folded into later revisits to the rules.

Like in IUNU you often work with extensive iconography. color schemes and symbolic language. How do you go about choosing / creating these symbols and is there pitfalls to avoid?

Well I let the theme dictate the artwork. I often use public artwork sources or illustrations from books out of copyright. Color and symbolic language choices come from just being a designer for many years. Instinctual mainly. I do go through a lot of variations with a design that people don’t often see. There may be 10 or 12 iterations of a card until I am happy with the basic layout and elements. 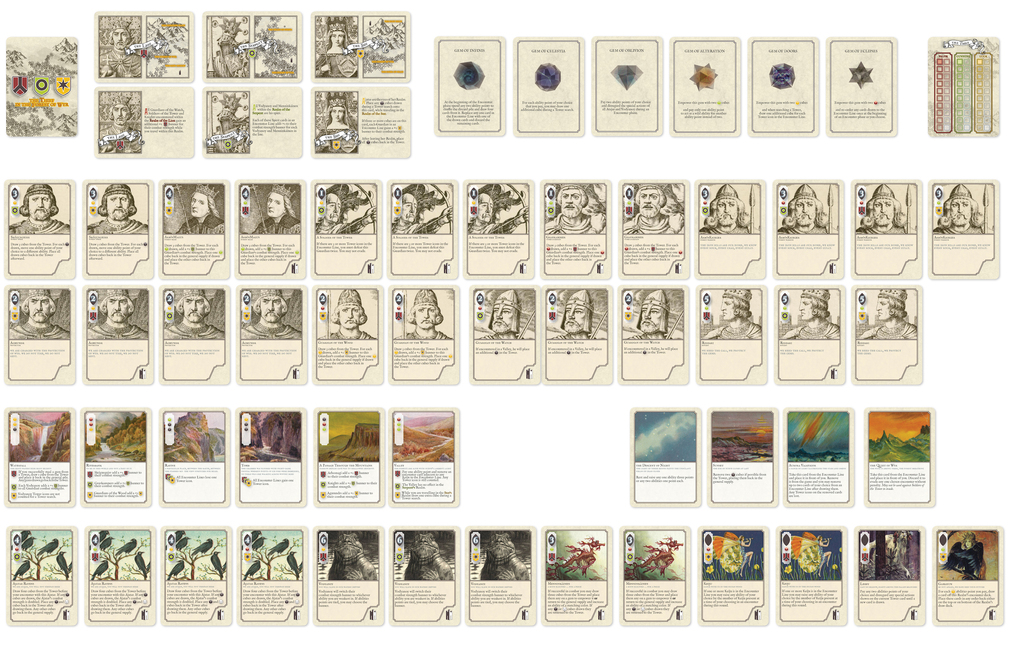 Pitfalls hmmmm. I suppose one would be to make sure a card with little text looks as good as one with a lot of text or that icons are suitable for colorblind people. You have to look closely at the outliers to make sure there is balance across the artistic panorama.

You have to look closely at the outliers to make sure there is balance across the artistic panorama.

What do you find makes a strong or good art for games?

Respecting that there is a diverse body of players out there – men and women, colorblind people, people of a variety of races and backgrounds. Embrace the diversity of the gaming community and let everyone share in the narrative of the game. For my solo games I never define the player’s character as he or she. Immersion in the theme and playspace is better this way.

Learning to do things by trial and error and keeping up momentum. I’ve been stuck recently with something sort of like writer’s block only in that I have explored most of the basic mechanics of games and I want to try new things. The path is much harder into uncharted territory. I suppose I would tell people if one design gets frustrating, go on to something else. Recharge. Watch films, read books, play loads of games. Be inquisitive about math and art and diverse cultures and you will find your design challenges are eventually overcome.

The path is much harder into uncharted territory

I exclusively use Adobe InDesign. I don’t own Illustrator so all my vector work is done in InDesign which is a little backwards. I know Illustrator would be easier. InDesign is what I use day to day as a graphic designer so that’s what I use. Occasionally I’ll bring images into Photoshop to manipulate.

My workplace is my tiny office in my house, though I consider my whole house my studio. I do woodworking in my basement woodshop. I create artwork on my dining-room table. I do my thinking work in my library. 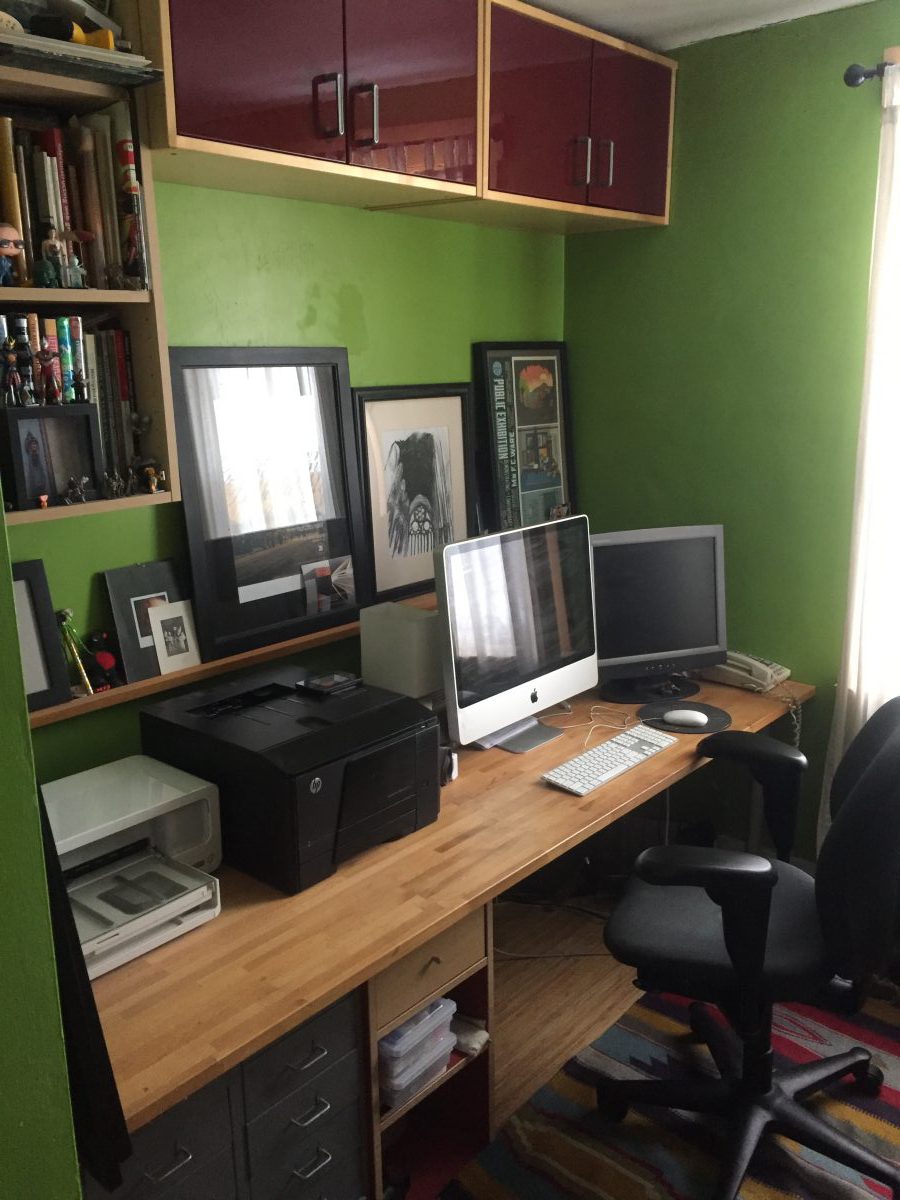 What’s the best piece of advice on making art you’ve been given?

This is more about thinking about design than making artwork but … years ago I had a great teacher Agus Rusli as a professor in architecture school who told me the first move you make can be wild and unexpected and completely off kilter but every move made therein has to follow a strict logic based on that first move. If you design four towers for a building you must back up that decision many many ways so that every element is strengthened by those layers and layers of choices that come after. I need four towers to talk about the four elements. There are 4 main parts to the building. The site is square and has entries from 4 points. 4 towers are more cost effect than 3 or 5.

Each design decision you make strengthens the end product.

Can you name up to 3 other artists/graphic designers you admire?

Ilya Baranovsky – also very very talented and his work is just gorgeous. He can do a redesign of any of my games any time he wants

Sampo Sikiö  http://samposdesign.com/ – I’ve had the pleasure of following his design work footsteps on Town Center, using his files as a basis for expansions I’ve done graphics for LudiCreations. Taught me all the fundamentals of vector graphics I now use.

I’ll stop at four but could go on…

Chakroun Karim (who goes by Carthaginian on BGG) who redid the Magic realm. The gold standard of game redesigns.

I am working on a game set in the Dreamlands and trying to finish the last 3 games in the trilogy of trilogies for the Shadows Upon Lassadar series. And I need to finish work on three games that are nearly complete but each has a knot I have yet to untie.

This is not a game project. I am currently working with Steph Swainston, publishing some of her writing with my publishing imprint – The Air and Nothingness Press – and I hope to do her next novel in a deluxe edition with illustrations by Kwanchai Moriya if I can afford him.

The New York Public Library’s catalog of images. DeviantART as a source for inspiration, especially the cartographer artists doing fantasy maps over there.

Thanks you Todd and keep the games coming! You read on Todds current activities on his BGG thread