This is an interview with a very popular tabletop artist and designer. He has been in the industry for quite some time and put his skills into games like Bruges, Settlers of Catan, Stone Age, Shogun, Legends of Andor and many more. 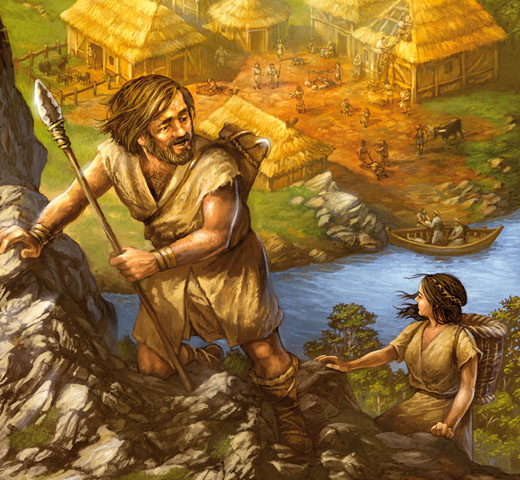 It is the artist Michael Menzel from the land of board games – Germany. Tell us a little about your artistic background and how you got into making tabletop art?

I can’t remember a time in my life where I didn’t draw. I remember a picture of Captain Future, where I drew him from the back, running up the gateway of his spaceship. Everyone was astonished because I captured the position of his feet anatomically correct and very naturalistic. I didn’t study, but I made an apprenticeship to become a Media Designer. After that I got lucky and got employed at a computergame-developerstudio. As the studio went insolvent, I was lucky again and stumbled into my first boardgame assignment. That was a dreamjob to me and I did my best to get as many assignments as possible.

I would call you an old school board game illustrator because you’ve been in the industry for more than a decade and you live in the land of board games, Germany. Why do you think you’re art has been so successful and do you think living in Germany has had an influence on your work?

Hm, to be honest, I’m not very confident of my work. Each fair I see so many really great illustrations, that I get quite depressed afterwards. A week later or so, I try to get better – again and work harder. Then feel great again with the new work, go to the fair, see the others, get depressed again … 🙂

While I’m trying hardly to get better, I put in a lot of effort and details. Fortunately boardgamers are very kind and respect and honor the details and the hard work behind it. So what might be the reason that people like my illustrations, is that they can almost feel the effort and engagement behind it.

Maybe it is not the effort but the details themselves – I think you are a popular tabletop artist because your games has an incredible amount of atmosphere. When you look back in time, is there any of the board games you illustrated that you are particular proud of?

A lot of them. I guess Legends of Andor is very special to me, because the fact that I’m the author as well, I didn’t really needed to be briefed and it was the closest to art, as I could get, because I decided almost everything by my self.

The board I like best is the one from „World without an end“, because of the little marketplace in the middle of the board. There are more than 70 people walking and talking and carrying und trading on this 5cm x 5cm square. 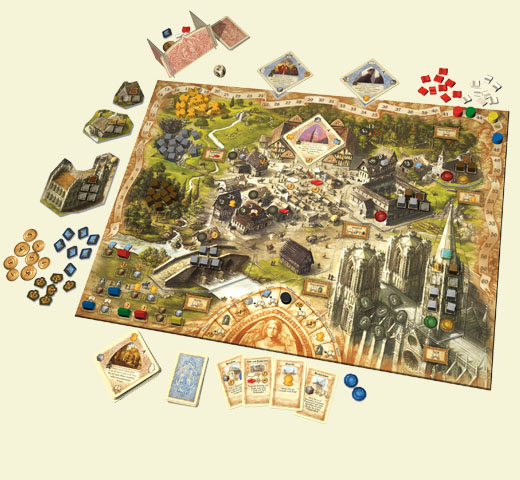 The funniest illustration contains a little game called „Kalle Kanalratte“. We search some canal-tiles for a little Party-Rat (with a pink shirt, real 70s style). There is actually only one of 20 tiles, which, counts, the one with the rat, and all the others could be blank. But we decided to illustrate other inhabitants of the canal on them. So it is really funny, when you reveal a tile and you disturb a polishing crocodile, a lost cow, a poor poet, a crashed Ufo, and so on. 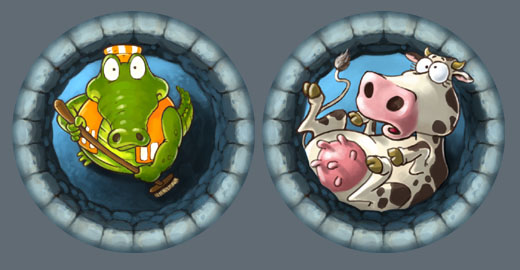 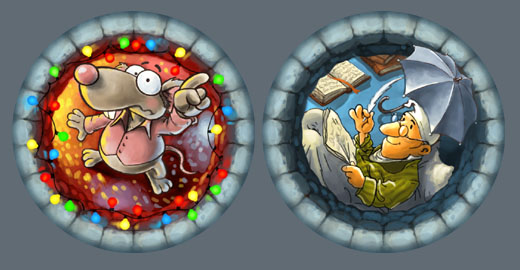 It is great to have a text-briefing. I always play the games, before I start, so I visit the publishers. In many cases the author accompanies us, so I can get a really good impression of the game and what the author and the editor care most about.

Can you tell us about your own creative process when making a piece of art for a game?

After I played it I like to start with the cover, the face of the game and the most difficult part of it. Sometimes the first sketch hits the bullseye, like it happened with Noria lately. Sometimes you need a lot more sketches, which I prefer to keep rather rough but with a lot of variance, so that the publisher have different choices. While finding the cover, we lay tracks for the style of all the other parts of the game. 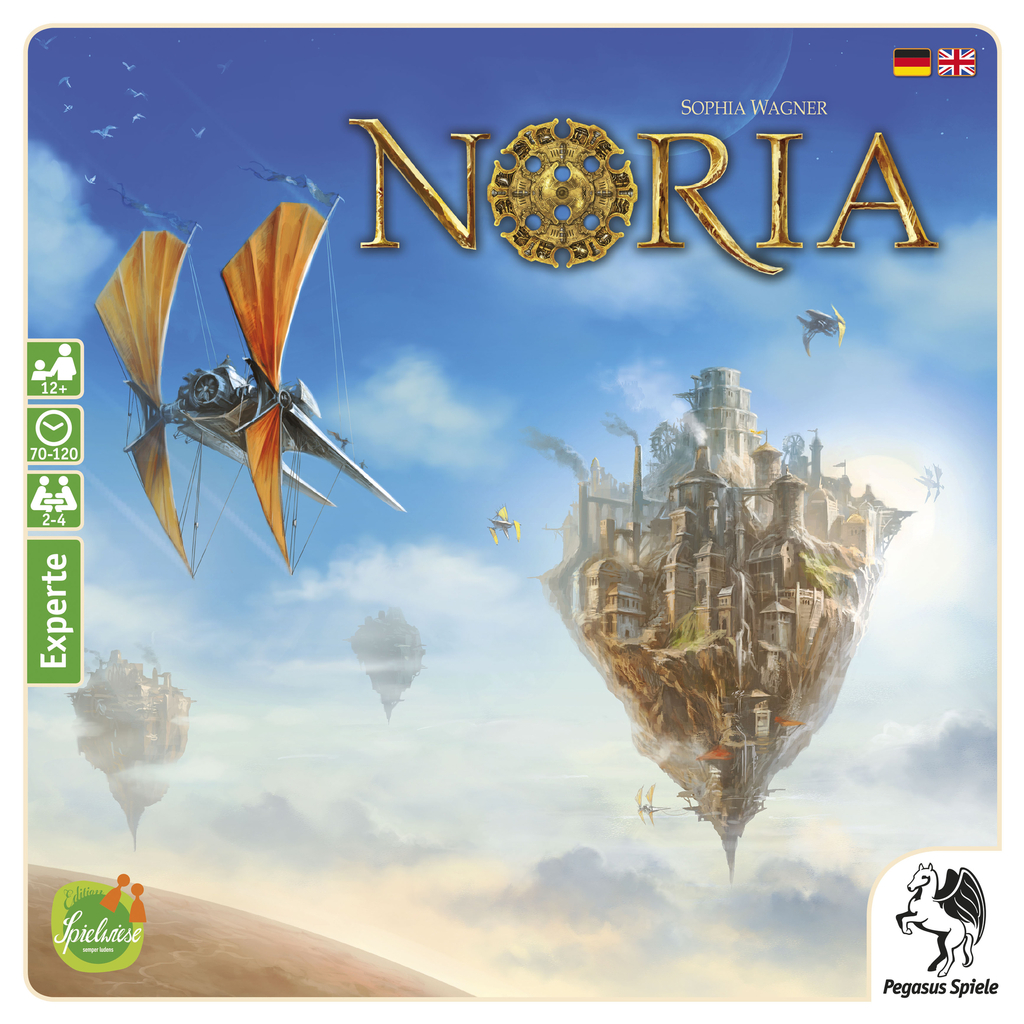 I work only with photoshop and an Intuos 4 tablet by Wacom. My workplace is located in the cellar, where I have just artificial lights and a lot of silence.

There are two wildly different styles in your work. The kinder games where you have a playful cartoonish style opposed to more heavy games where you often work in a beautiful colored and highly detailed isometric view. Can you tell us what you like about the isometric view rather than for example top down?

Lately I read in a comment on the game Agra on BoardGameGeek that describes the fortune of the isometric view really good. This someone said, that he would like to minimize and walk around in the city I painted. I guess that’s it. If you have a view just from the top, there is not much left of people except of their hair and their shoulders. And the Buildings are mostly roofs.

But of course there are some boards, that need to be drawn that way, because of its function. The funny thing is, that, because my isometric boards became a little famous, I’ll get booked especially for those games. So I could do it different, but no one wants me to 🙂

The art can underline the mechanics and make it easier to comprehend.

What does in your opinion make strong or good game art?

It’s easy. At first it has to serve the game, it shouldn’t disturb the mechanisms. Second it should look nice, as stupid as it sounds :-), Third, and that doesn’t happen always: The art can underline the mechanics and make it easier to comprehend. For example: In Agra, there is a boss called Akbar. To deliver stuff to him, is the part of the games, that really counts. So all the other things you do on the board lead to Akbars throne room. When I played it I thought, that this tableau (as it was in the prototype) should be presented a little more noticeable, which lead to the rack-solution, that is now part of the game. In this case the art underlines the importance of this particular mechanism. 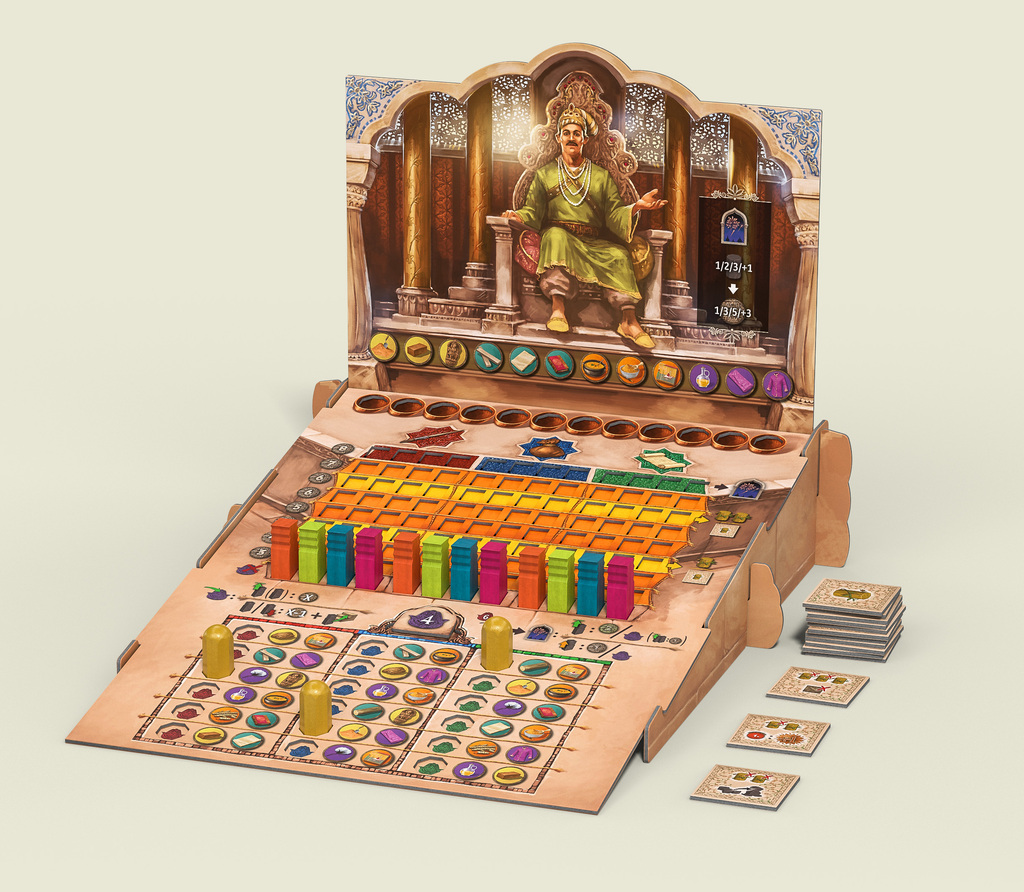 How have you evolved as an artist since you started and have you changed the way you make art for games?

I sincerely hope to get better with every year. I think I learned to adjust my style towards different targetgroups, so that the games sell better and find the right people, who will have fun with it.

Try to stay curious and think about the best solution for each game. Board games live by their originality. You as an illustrator have to be open for this originality, and have to try to serve it as best as possible.

I was influenced a lot by Franz Vohwinkel. By trying to become as good as he is, I developed something different, but he opened the door for what boardgame-illustration is today. And he is still one of the best. So;

Franz Vohwinkel, Miguel Coimbra and Naïade – all responible for my depressions after each fair 🙂

Haha – how cruel 😉 Is there one game you think is particularly beautiful (you did not make)?

I really love the board of Celtica, done by Eckard Freytag. Sadly he died a few years ago.

I’m sorry, but I’m not allowed to tell. But I’m pretty happy to be part of some very nice geek-games and some funny kid-games as well.

It was Legends of Andor. I’;m perfectly ok with getting briefings, illustrate what I was told, try to serve the bigger game-idea of an author as good as possible – but I have to admit, that it was a really great experience to decide almost everything by myself. Just getting other opinions, but to be in charge of any decision. I guess that is, why Andor looks the way it does, without compromises, just one vision. Well, that was a dream project.

Have an eye on the work of the other illustrators, but I think it is important too, to give your own style some space to grow. I think a lot of digital painters look all the same. And as much as I’d like to be as good as them, I’m happy, that my stuff looks still different.

That is a great advice I really think many of us artists should think about. Good luck with all the secret geek-projects 😀  I will let that final word hang here.

I think a lot of digital painters look all the same. And as much as I’d like to be as good as them, I’m happy, that my stuff looks still different.