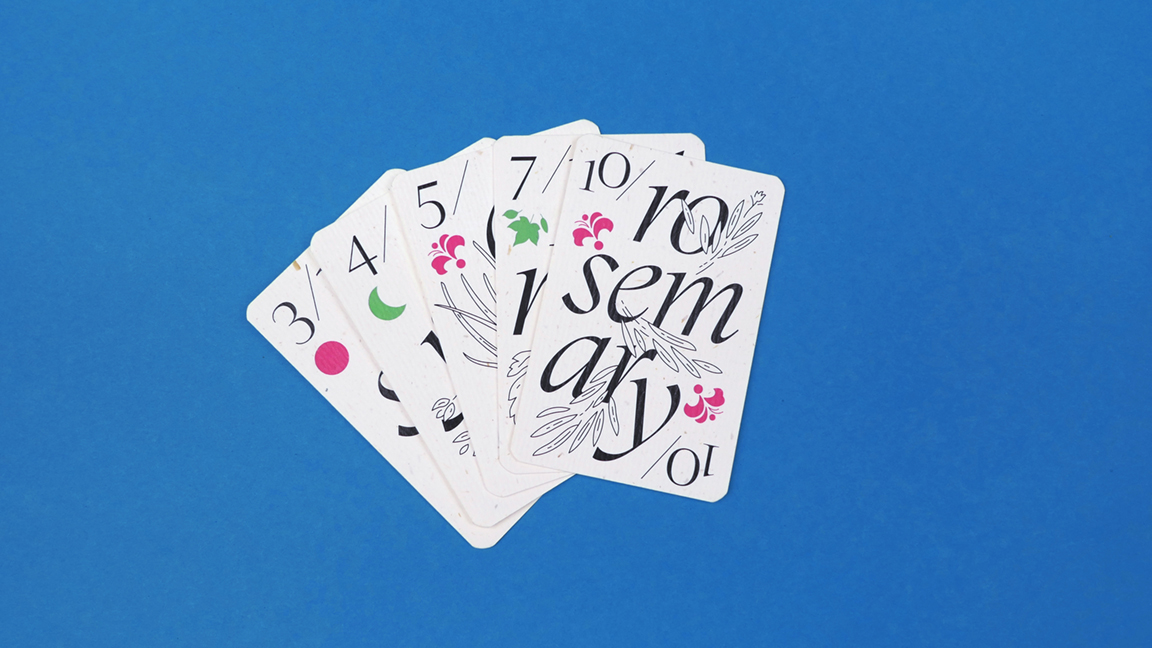 This is the first time I designed a game and it’s rather a side project than my profession. My background is in graphic design, art direction and advertising. Which is what I have been working in over the last ten years. Like many, I started with a lot of drawing from very little on. I continued drawing and painting in the first years of university, but discovering typography made me switch to graphics and design. For this project, the starting point was to make something sustainable, but fun. Designing a game was then the first choice and also something I thought I’d love to do, as a different and inspiring challenge.

Not really, but – if that counts – my final project for university happened to be a game: I had the idea to combine sort of an urban geo-caching and connecting friends online. Which was a new thing back then, 2006, with social networks popping up. For that I created little monster-like, sculptured characters called „bribes – brand new friends“. Also I did read a lot about gaming theory and tried to develop a rules system that could actually work. Not sure if I succeeded in that, but it was a really intriguing subject to dig in to. 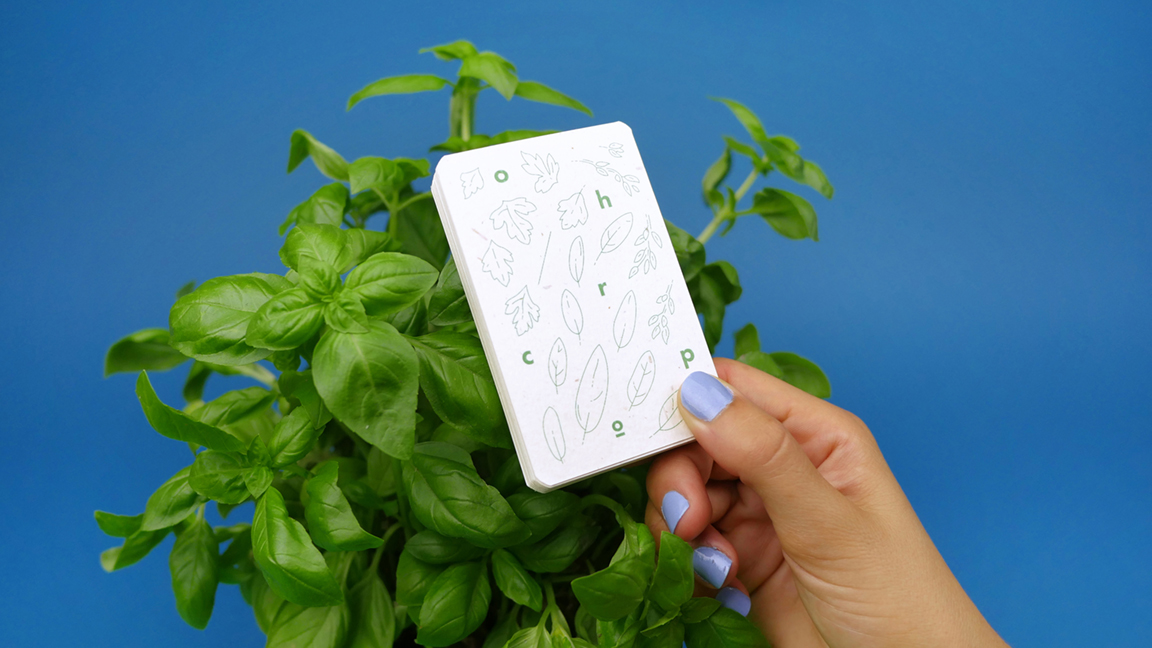 How did you come up with the idea for oh/crop and when did you think about it being plantable?

The idea to make something sustainable and making it fun and beautiful came up with a couple of friends. One of them is a professional in paper production and packaging, so that’s how we came across the seed papers.

We originally tried to develop a whole new game ourselves, but finally decided to adapt an existing traditional card game to our theme. The game is best known as „oh hell“ (hence „oh/crop“), but I used to play it under the german name of „Fahrstuhl“. There’s tons of regional variations and names to this game, our version is really being closest to the one I played with my family.

Sustainability itself is very present in our daily lives and there is also a big trend in home gardening: growing your own vegetables and herbs for your own use. Also as a counterpart to a digital lifestyle. And there’s something common there with board games, I think. So we thought, creating a fun card game, designing it with love and effort, but which then would „dissolve“ itself into plants – there’s some beauty in that.

Do you think we will see more of this type of games in other ways?

Maybe not so much for games, because, well, the cards will disappear in the end and grow into plants. But I do hope that replacing any everyday objects with biodegradable or environmentally friendly and sustainable materials would find new ways and become a new standard, for any product. 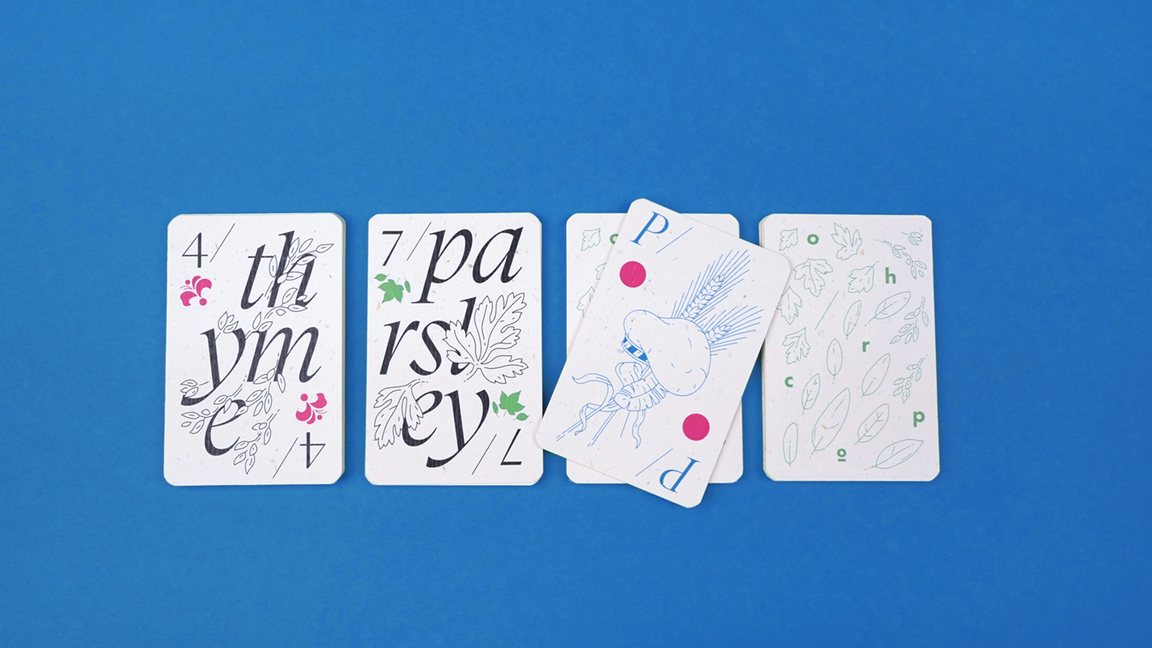 As this is a personal side project, I took the freedom to simply do something I would have fun designing it. So, lots of typography and vector-illustrations I was able to draw myself. Then I tried to come up with a design, that is close enough to a traditional card deck, so that people would be able to recognize the basic elements: the numbers, the four suits (or „seasons“ in this case), the Jack, Queen and King (which here are a Peasant, Queen and Ruler, to fit an agri-cultural theme). But at the same time I wanted to make it look contemporary, design-appealing and without using the usual visual codes for sustainability.

And finally, as a last consideration, I wanted to create a strong visual style without using too much ink or paint in production. Which is the reason for the line illustrations and lots of white space, instead of using generous full colour areas. 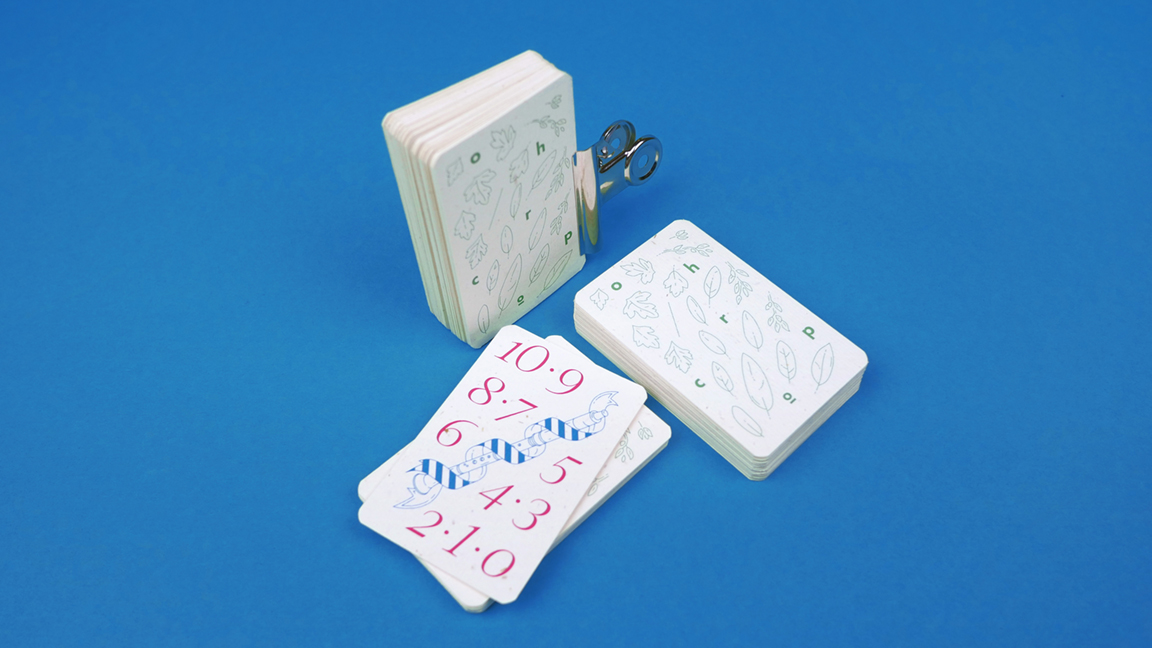 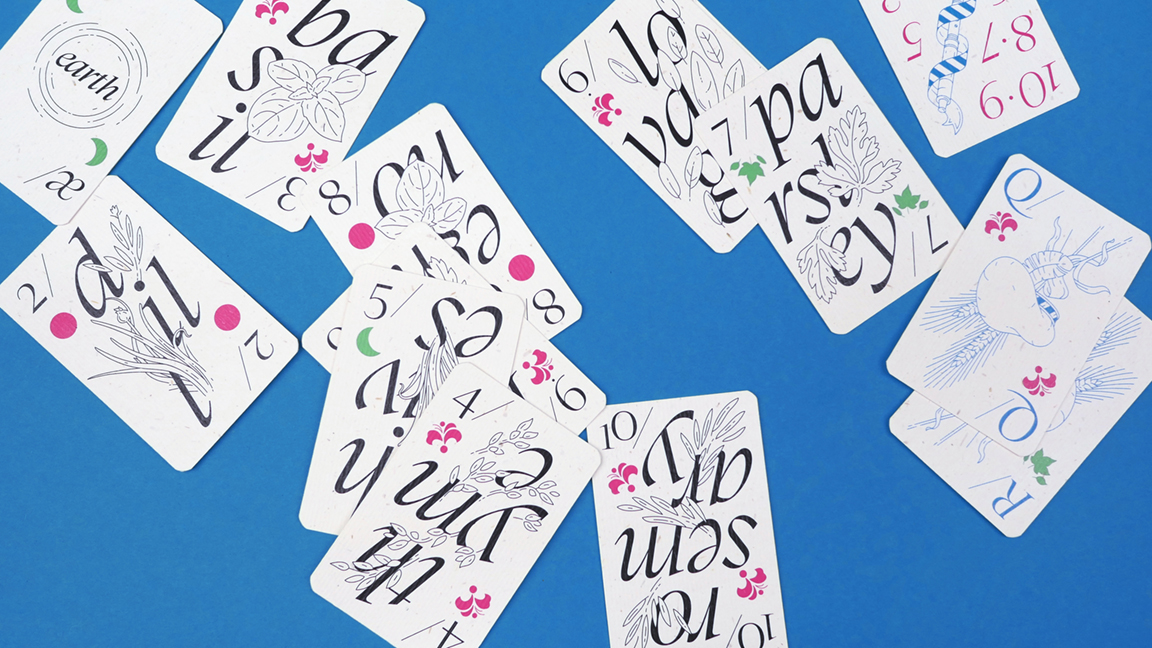 Can you tell us about your creative process when making a card design for the game from initial sketch to final art?

My first step is a visual idea, a concept or starting point. That might as well happen during going for a run or whilst walking the streets. That concept of course develops during the process, but usually once I’m focussed on an idea I try to stick to it as a goal to work towards to. I also had a close look at how traditional cards work: what is essential? What can be left out? And what stories are behind the symbols and could I use them for my designs? For example, for the Joker-cards I’m using old legends or fables represented by symbols like the medieval flute. Probably not many people will notice that really, but I hope that it will transmit a feeling of depth.

Although in the end everything was created with the usual computer tools, the first visuals I made with pencil and paper. The pencil still gives me an amount of freedom for visualization a computer program simply does not. Even typographic designs I might draw up first, trying different styles, just to get a feel for which direction the overall look should take. I then recreate those designs in Illustrator, Photoshop, InDesign, XD, depending on the project I’m working on. I use a pen and tablet, but more like a precise mouse than as a painting tool.

You have a very beautiful stylised graphic look on oh/crop. How do you choose & limit yourself to make it all harmonious – like the limited color palette where white has a huge part ?

Thanks 🙂 Well, yes, limiting typographic styles and colours can be an effective way of creating harmony. It’s one of the first things I do when starting a design. I choose the typefaces very carefully, and spent some time on defining a colour palette. The colours usually change a bit in the process, because they are very subjective and it helps to get other people’s opinion. But then really it’s a lot of care and love to the details: to shapes, contrasts and negative spaces, to distances, to grids and creating an overall consistency. To be honest, initially I wanted this to be a bit more loose and wild. But in the end it turned out quite „harmonic“: imprecise shapes can really bug me 🙂  So there’s something to work on for the next projects.

But then really it’s a lot of care and love to the details: to shapes, contrasts and negative spaces, to distances, to grids and creating an overall consistency 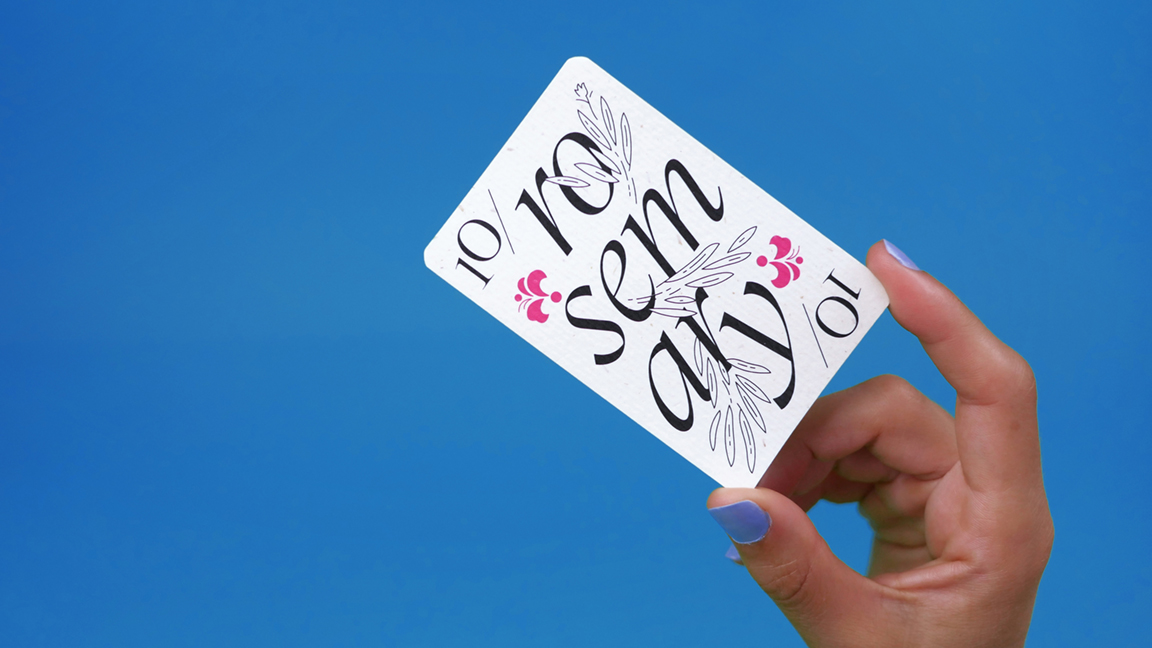 What makes strong or good game art in your opinion?

Since I’m not a game art specialist, I guess I couldn’t give a good opinion on that. But I think generally any artwork that transmits dedication is a good one. And for games specifically, I think I could say that I like it when the functionality is a well-integrated part of the designs, rather than being added on top. And the other way round of course.

What challenges have you had so far oh/crop?

Design-wise the most challenging elements were the herb illustrations. Finding the right balance of detail and graphical abstraction was a tough one. In the whole of the project, finding and testing the right seed-papers with a good seed quality and texture has been the most difficult part.

Uff, difficult question 🙂  I guess, one expression that stuck with me is the „will to design“, („der Wille zur Gestaltung“ in german). Meaning that in every design you make, you would at least make the effort and try to create something authentic and beautiful.

Name up to 3 other artists/designers you admire?

To be honest, there are so many great artists and designers out there, I wouldn’t know which one to state right now. But when I started as a graphic designer, I was really inspired by the works of Herb Lubalin and Stefan Sagmeister.

Finally – where can people find more about you or oh/crop?

I’m just starting to work as an independent designer and art director. You can get in touch with me here: sebastiansattler.com

The game oh/crop is still running as a Kickstarter crowdfunding project. And I’m of course very thankful for any support ! 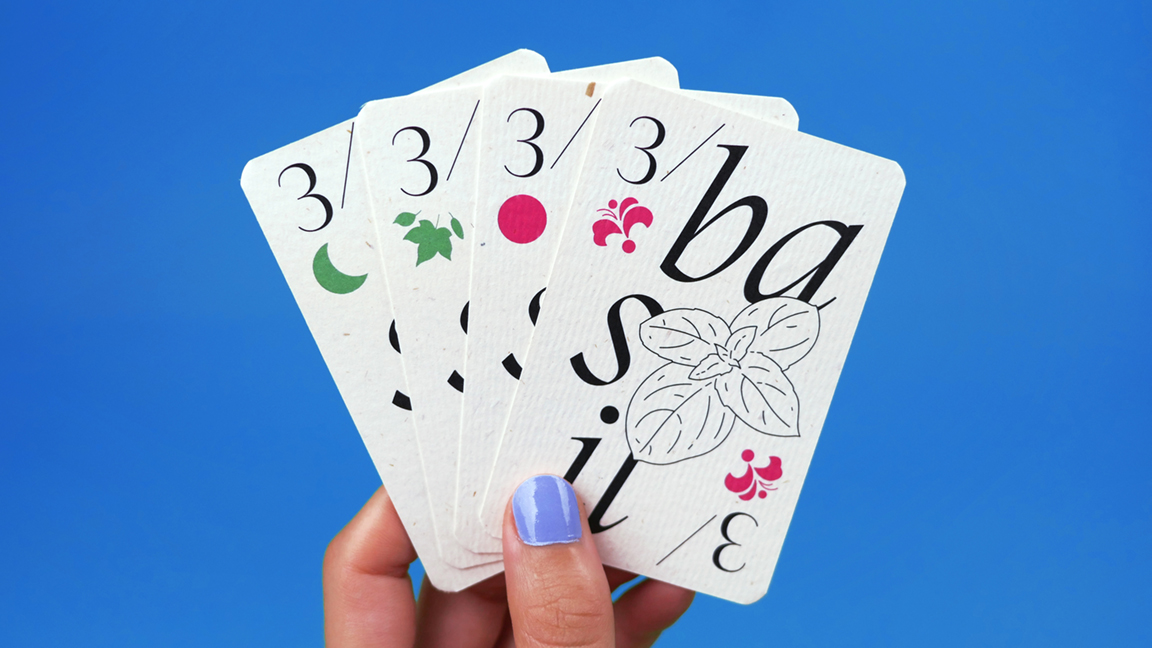 Thank you, Sebastian, for sharing your story.