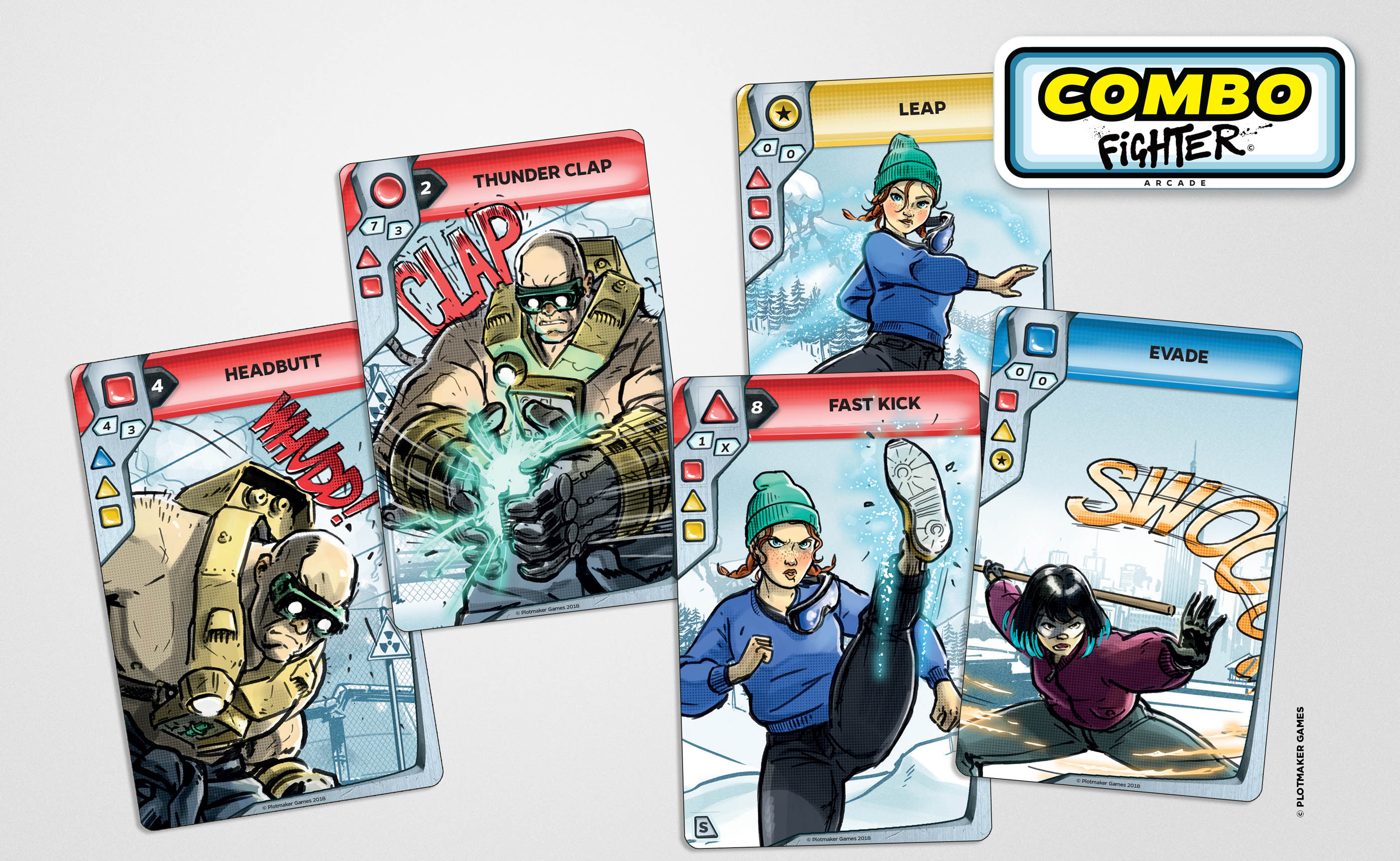 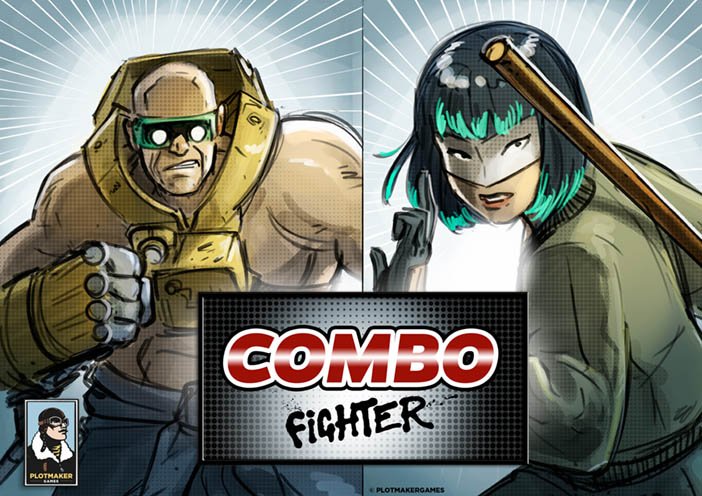 Combo Fighter came to life 2 years ago under the name Caesar’s Glory  After London Dread we wanted to do a smaller, more head-to-head, fast-paced fighting game. Ideally only cards. I had read an article about a big exhibition at a Danish museum on gladiators and Asger started working on mechanics that had the feeling he experienced when he played his +7000 games of Tekken. 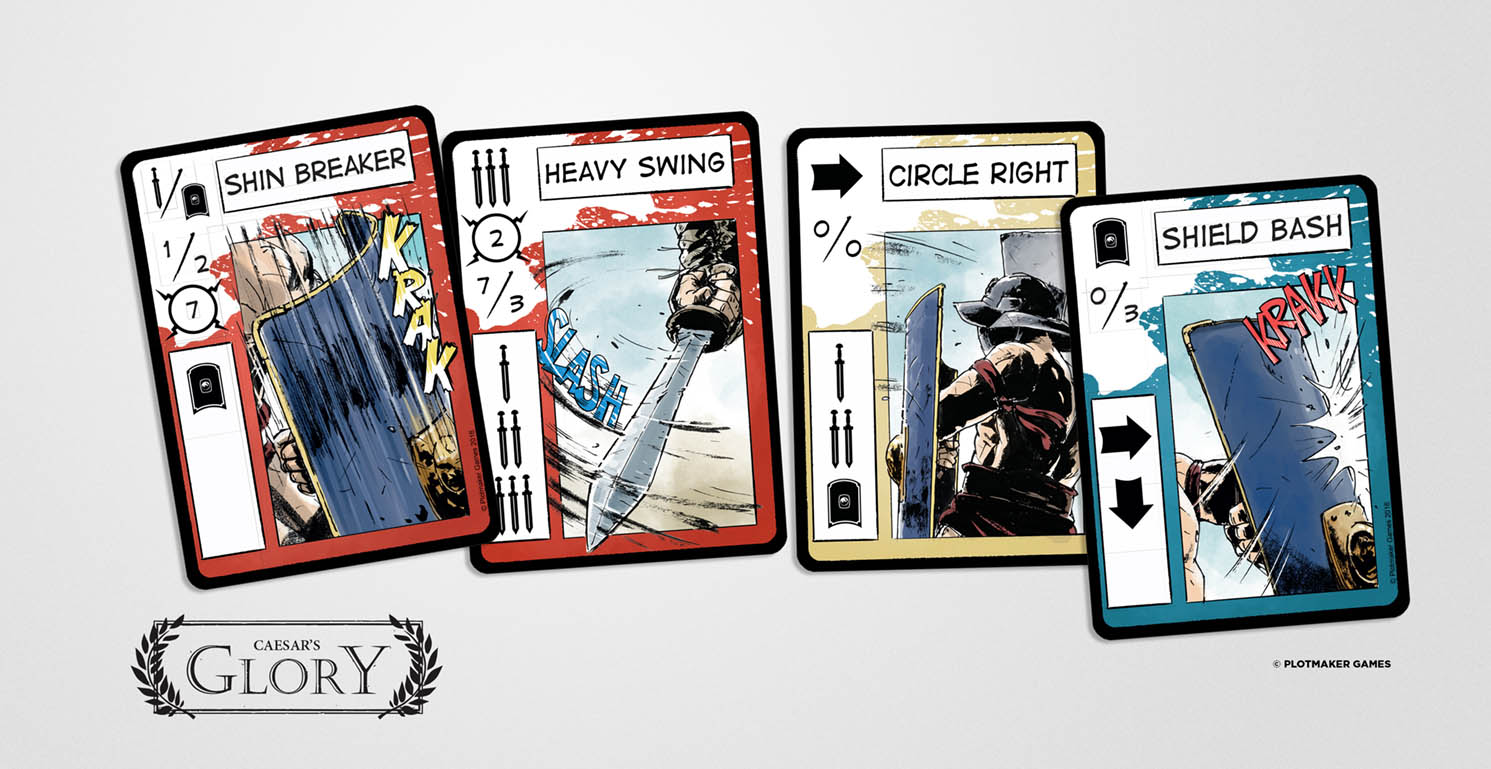 I picked an art style for Ceasar’s Glory that had some old school comic book feel to it. A gritty, brutal and sweaty look. I did the black line the good-ol’-way with the black pen on paper and white paint for corrections, scanning the line work in and do color in the computer. 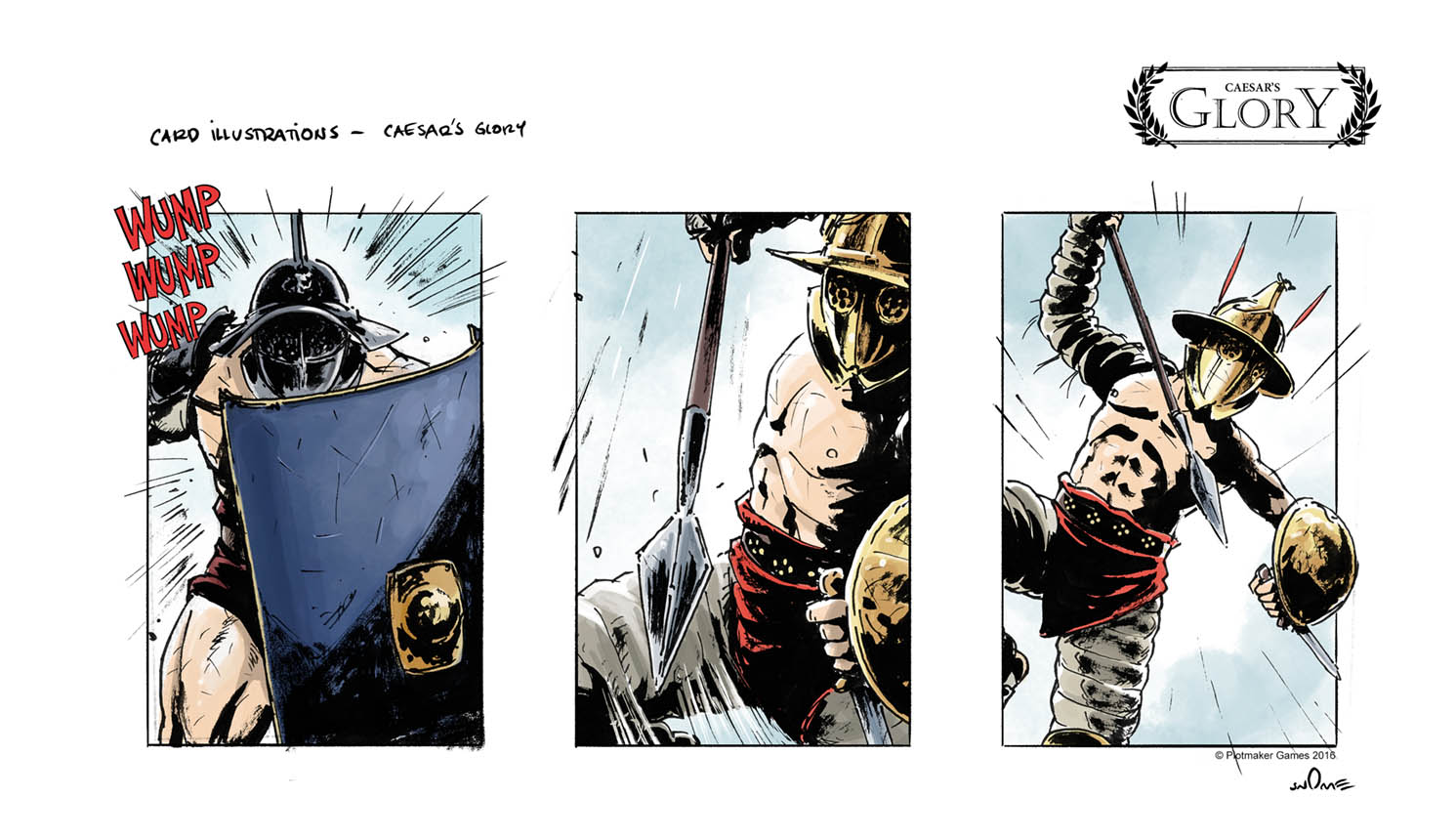 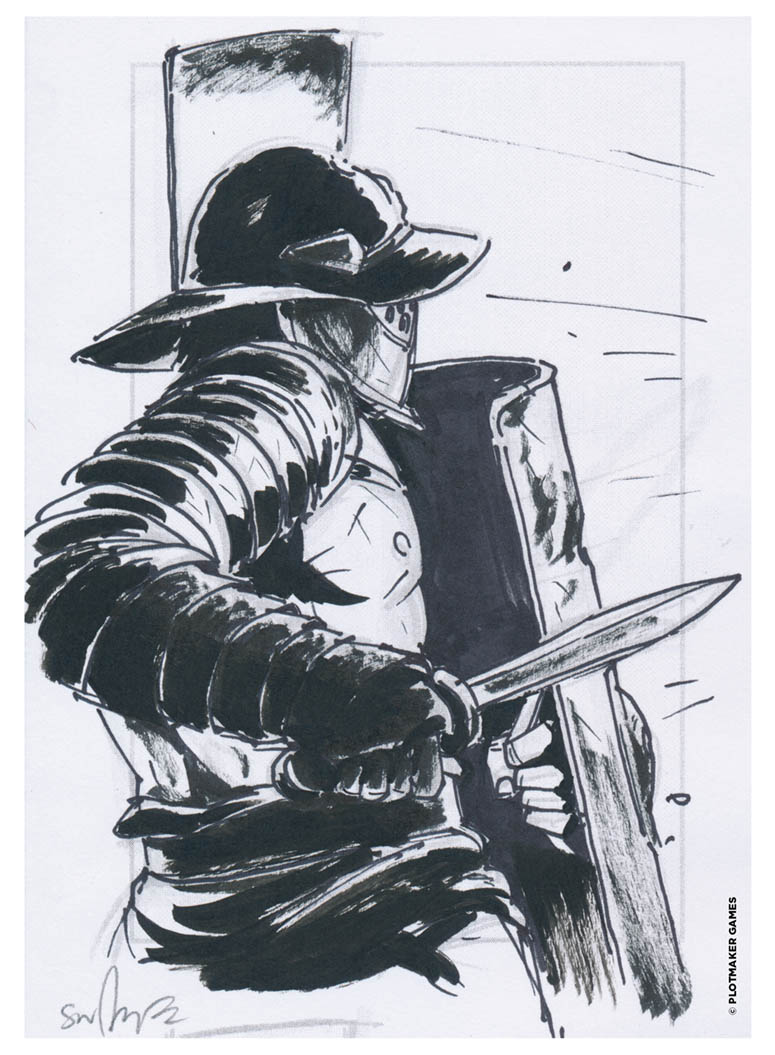 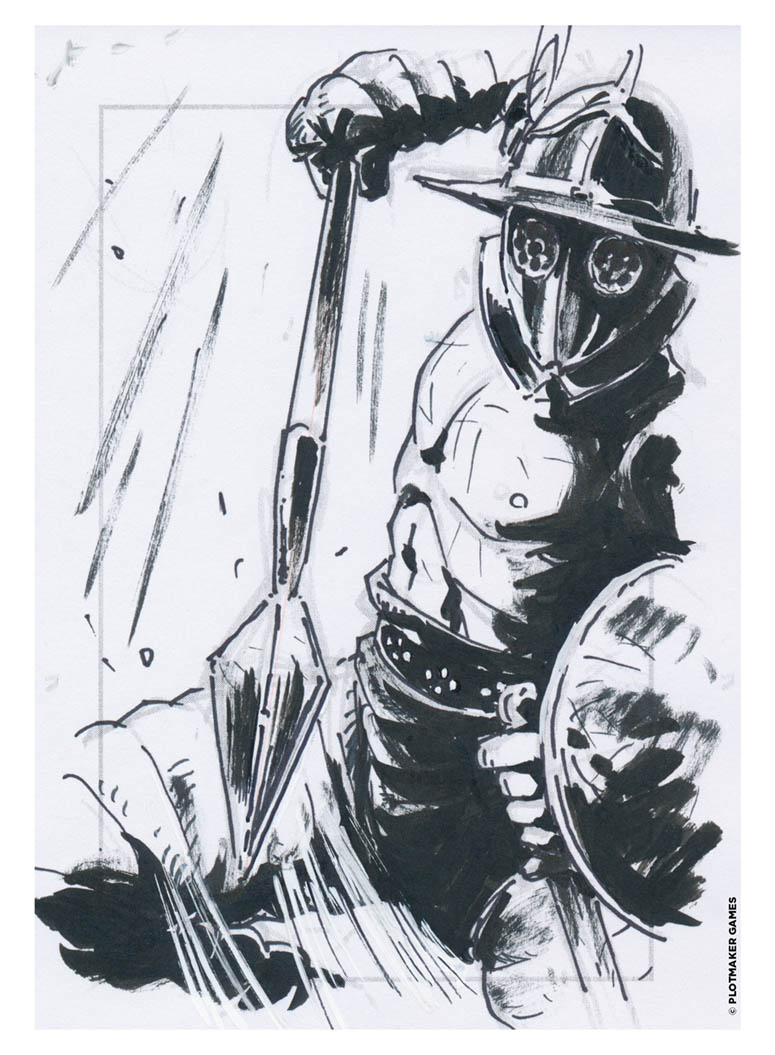 We had 8-9 copies made for pitching and we really thought the game was good to go. But we were a bit surprised to realize that the gladiator theme wasn’t that well received. The Roman Empire theme has a more heavy strategy feel to it and not the fast-paced fighting game we wanted to do. 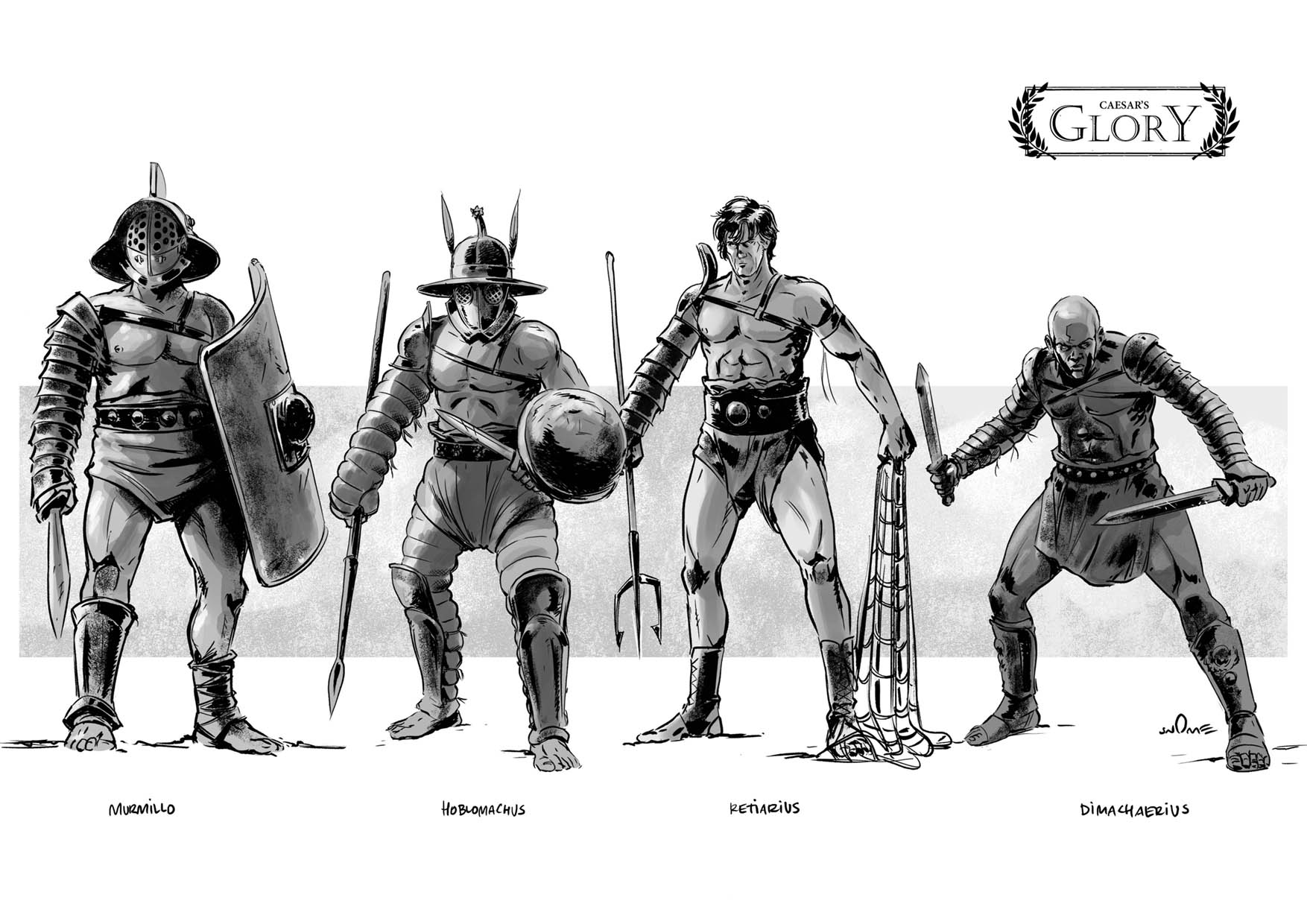 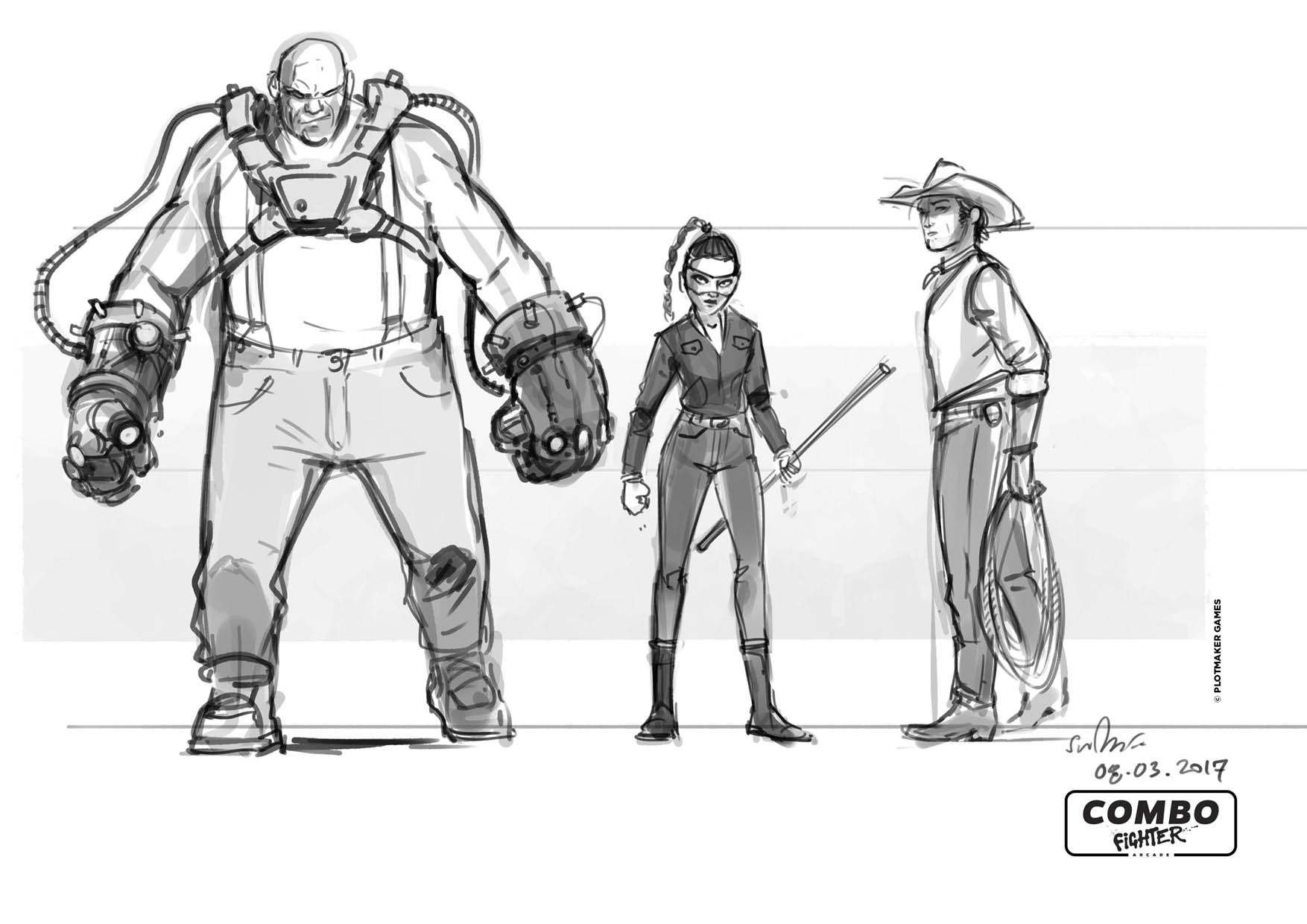 At that point, I had already done some sketches for an arcade look and we came up with the name Combo Fighter. So we decided that the arcade path was the way to go. From there on we worked at having two fighters ready to show and demo at GenCon 2017.

Tell us about the different characters and their styles.

After changing the theme from gladiators to arcade fighters we quickly saw that both the visual- and game-design space opened up. With the gladiators we wanted it to feel as realistic as we could. But not seeing the gladiators faces because of the helmets, using their gladiator names and fighting styles also made you lose contact with the character you were playing. After changing the theme we could start doing what we love when making our games – create a world, a universe. My first sketches of Grace Lee and Boris were based on the fast and light-footed Hoplomachus and the heavy and slower Murmillo. We could also introduce more fantastic effects and give each character a cool name and a backstory. 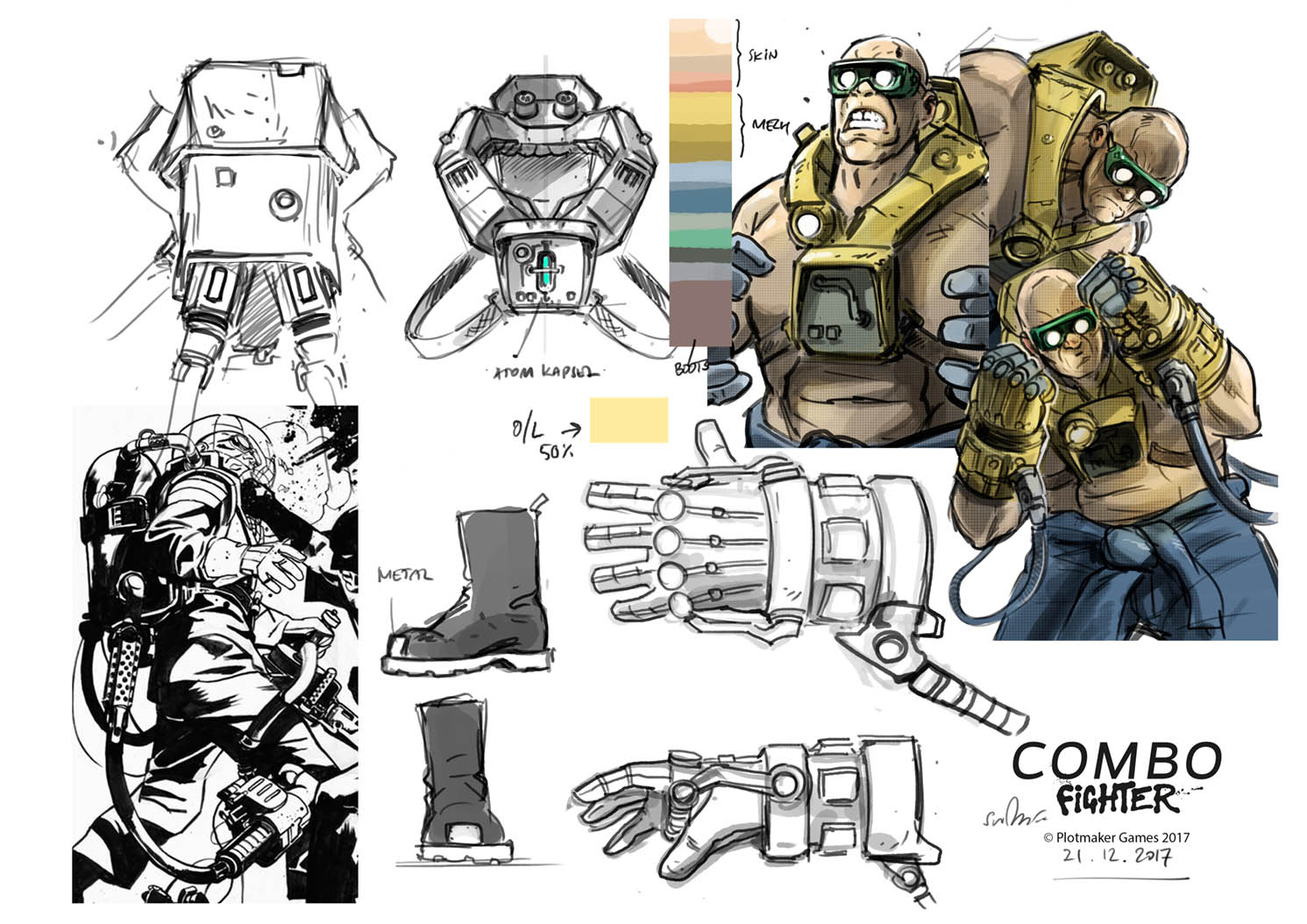 Can you tell us how you developed the characters? Where do you start when creating a new character? And in what order do you develop the moves? Are they in place when you start drawing or what?

The character design comes to life in my sketchbooks, in my head when biking and when I wander the wast lands of the internet. I love looking at people and their various treats and features. Observing people who has a style and a strong character. Various countries soccer players has always fascinated me. The pan across the starting player’s faces during the national anthem is the best inspiration I can imagine. Asger and I have a talk about what kind of fighters we want in the game and what their special style and ability should be. Heavy, fast, small, tall and so on. We then sit across from each other and I start on concept sketches of how I see the character and Asger works with the mechanics to support that feeling. 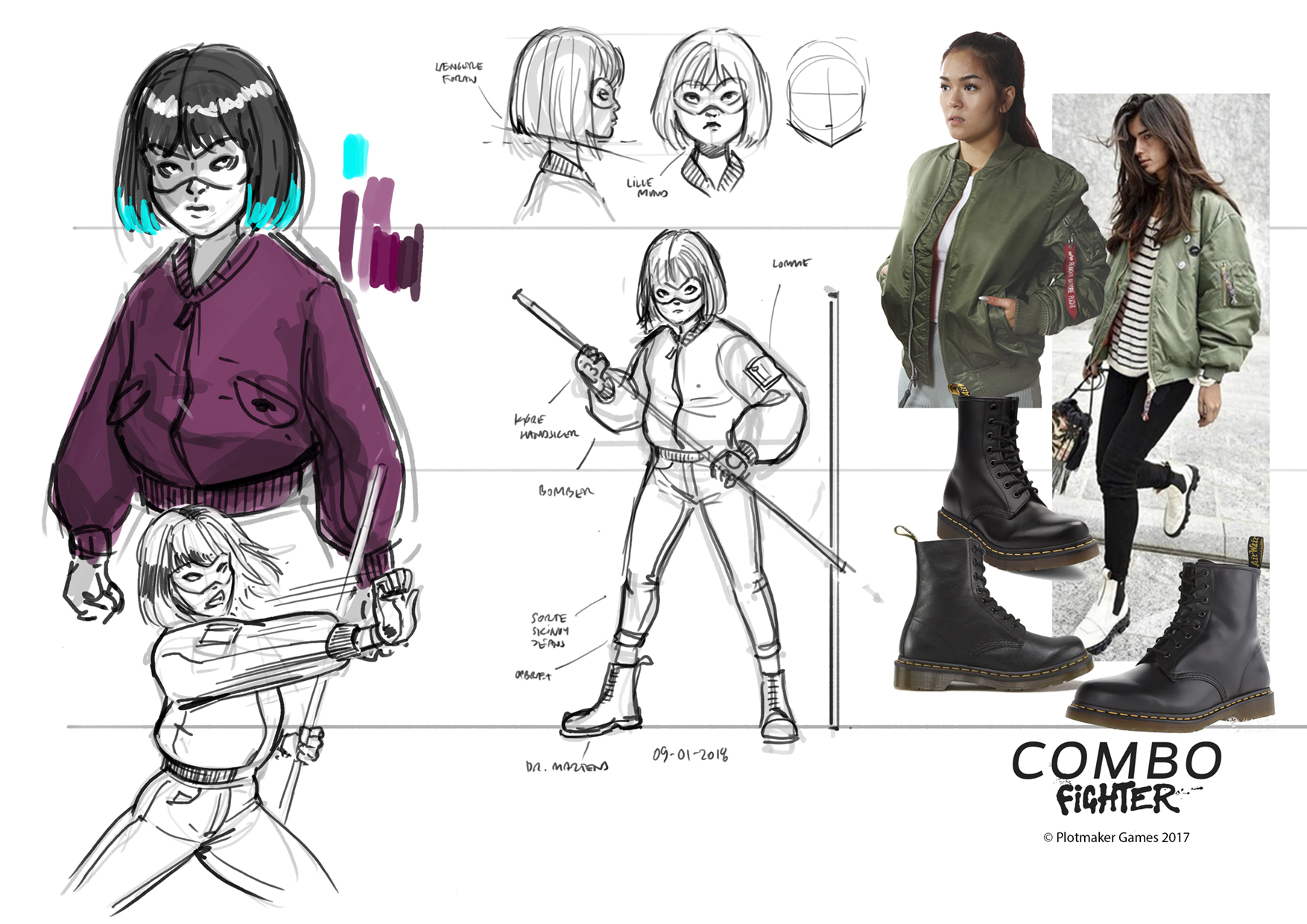 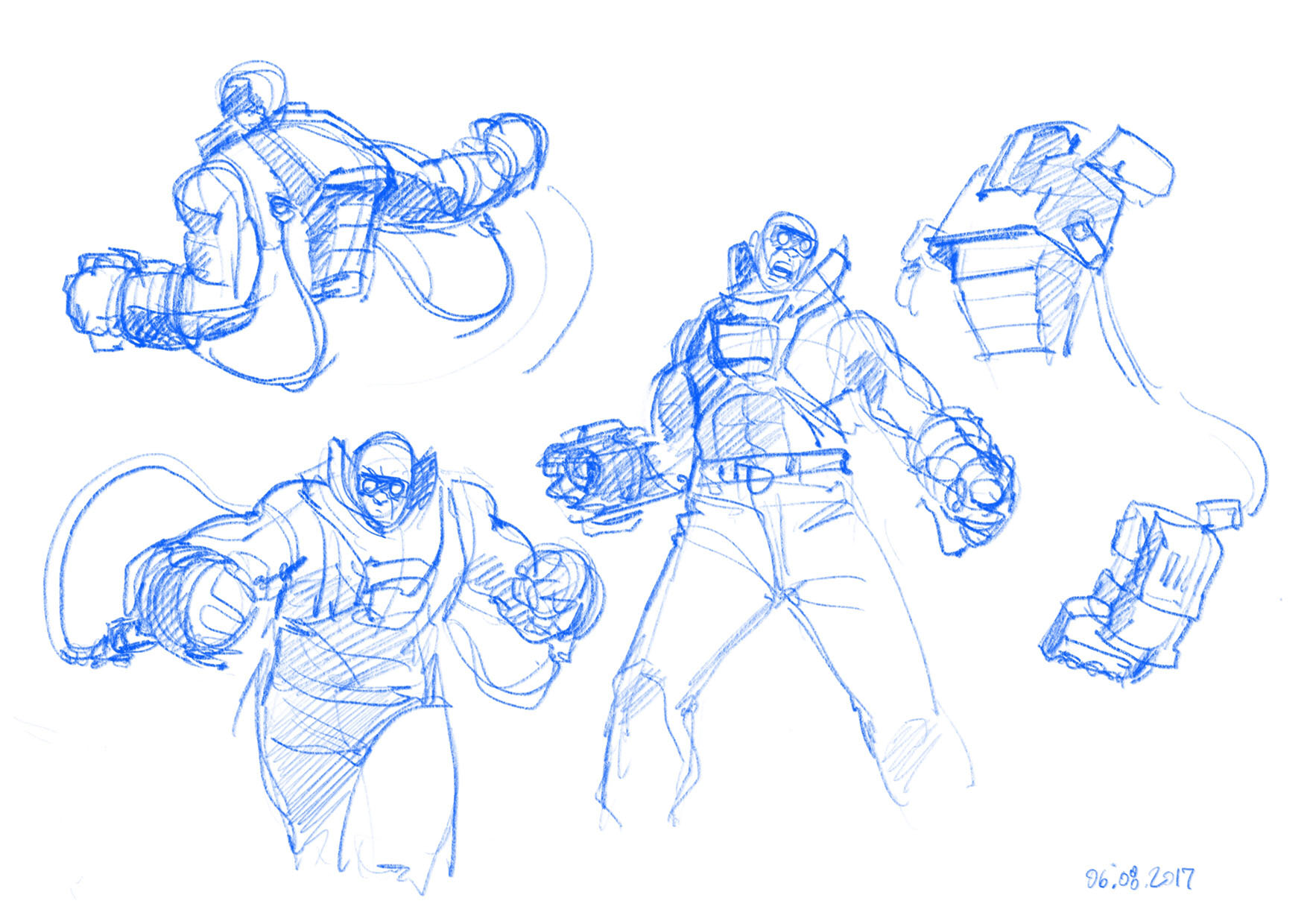 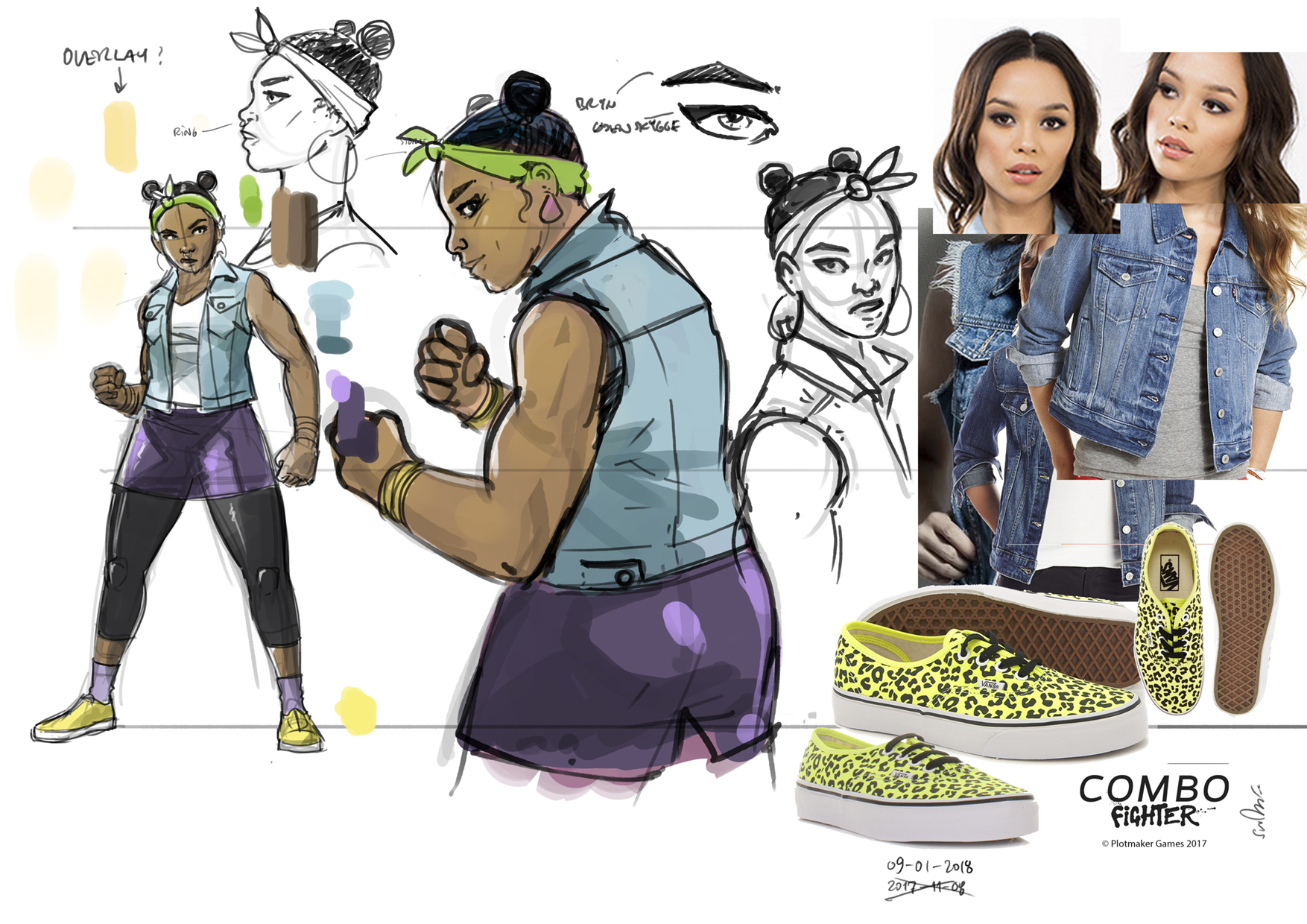 When we get to the cards, Asger has made a list with the names of the moves and mechanics. We then have a session where we go through each card illustration and I make a quick sketch . The sketches is then placed in the print and play and we start playtesting with those sketches to see how everything works. And then it is a matter of finalising. But new elements keep being added and adjusted. The latest big change was adding backgrounds to the cards. For a long time we didn’t want a background on the cards since in our heads we wanted them to fight in the same location. We started talking and made a setting for each character. I made a test with a background on a Grace Lee card and it was obvious it made so much sense to have it. Each card got more of a comic book feel. So it is a constant process.

Do you work in hand or on a tablet from start. And when do you start coloring?

That varies a lot. I use sketchbooks for scribbles, thumbnails, and notes. Also when my kids have hijacked my computer or iPad a Saturday or Sunday morning I work with pencil and paper. But after Asger and I have talked and explored the universe and the characters I usually sit by my Cintiq and sketch digitally. For this game I wanted the characters to feel engaging on each card and at the same time be true to the actual move. Asger has a big passion for various fighting styles and techniques, which he has stayed very true to designing their moves and combos. So he kept a very close look on how I illustrated each move ?. Color comes later. I usually have an idea for color when starting on the concept sketches. After line work, I do a quick pass at grey values and setting the light. Then a multiplied layer on top for colors and finishing off with a top layer for highlights and details. 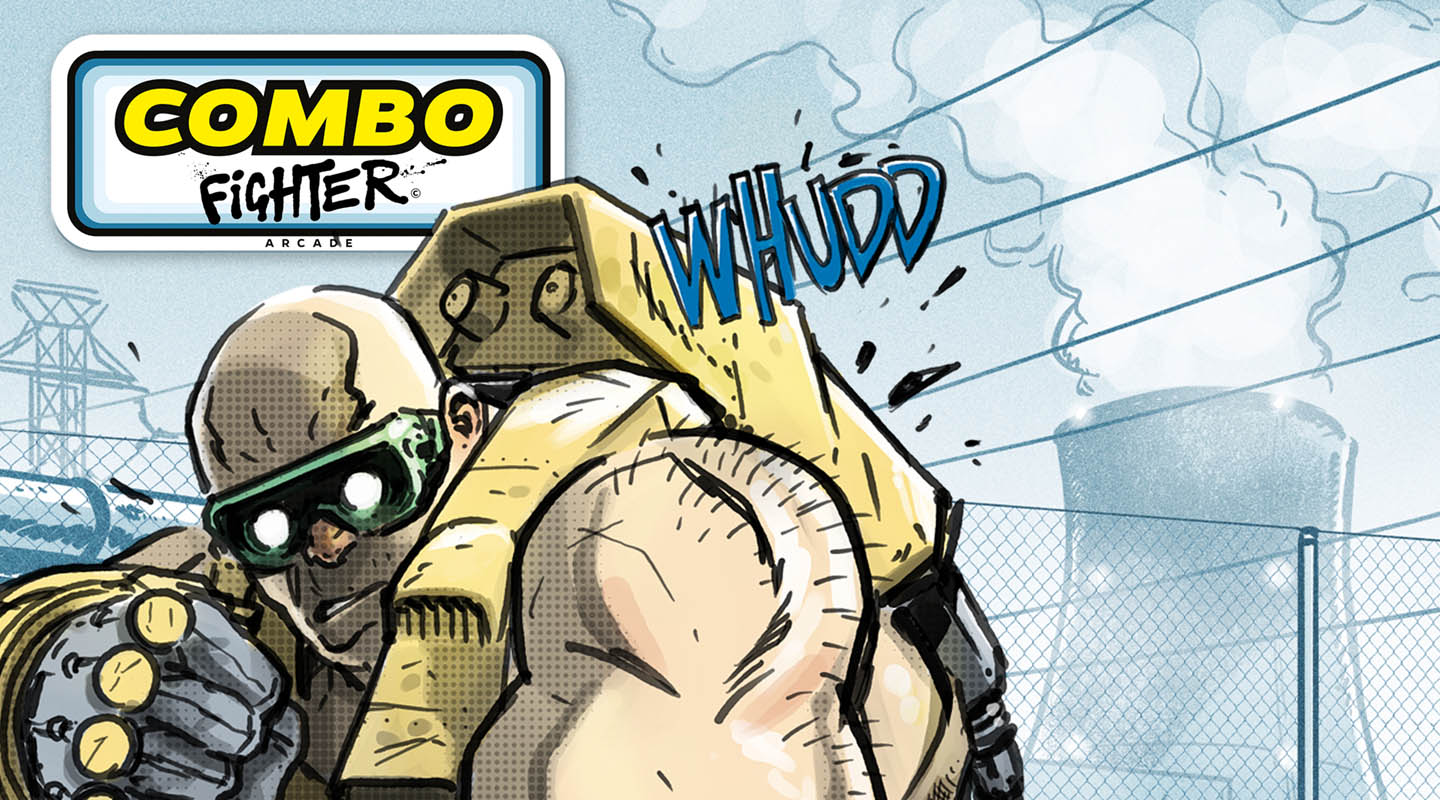 What is your own favorite character and why?

To draw my favorite fighter would be Boris Wolfram. A big hard hitting brute. I loved doing his gear and his moves. Also Ruby Fox and Patty Keenan. Ruby Fox because I gave her a flashy more 90s style and Keenan for his desaturated, laid back and raw style. Actually, to playing Combo Fighter I like Ferro and IJzer. When you land Ferro’s vicious special rule in a Special Combo it is defiantly felt by your opponent. And playing IJzer, she can combo really well into almost all of her cards. That is extremely satisfying!

Previously I made a post about series in game cards. An illustration is defaulted a still image and here you try to simulate a combat where the fight pushes back and forth. You are a professional storyboard artist as well as game illustrator. How do you capture the most describing situations, angles and poses?

It has been challenging at some points. I try really hard to have an engaging feel to my illustrations. I research on google and pinterest for spectacular moves or styles. Then i do quick doodles and if necessary photo references, where either myself or my wife pose as mean fighters. And I have reread the Daredevil comics illustrated by Michael Lark who is a huge inspiration to me. His way of capturing the intensity of a fight, looks and reactions are awesome. A big challenge in this game is that I chose not to show the opponent. I found a way out of that by doing a sort of power impact effect and some speed lines if the character was evading an opponent. When playing a combo I wanted the combo string to appear as a small comic strip as if the combo was coming to life. So varying the size of the character from closer to wider compositions. Very much as I do when doing storyboards. Always looking for contrast in layout and size.

When playing a combo I wanted the combo string to appear as a small comic strip as if the combo was coming to life. So varying the size of the character from closer to wider compositions. Very much as I do when doing storyboards. Always looking for contrast in layout and size.

Did anything change from the first gladiator version to the new Combo Fighter in the way you choose motifs.

No, not really. Doing the illustrations for Caesar’s Glory I realized that the illustrations got more dynamic if not all of them was head-on (towards the spectator). Especially the Murmillo had some sand (now yellow) positioning moves where I illustrated the action more from the side. I took that straight to Combo Fighter. A thing that didn’t make it from the gladiators to Combo Fighter was extreme close-ups of the gladiator’s weapons on some cards. I found that a closeup of a foot or a fist would simply be too boring and lose the intensity I was looking for in Combo Fighter.

Have you noticed any advantages of you working so close with the designer?

This is our third boardgame that Asger and I have made. But from my experience, I definitely feel that the projects have benefitted from us working so close together. We can’t imagine any other way of doing it. As mentioned before we love making these universes together and put a lot of effort in making a coherent universe for our games to take place. With Combo Fighter we almost felt a freedom after dropping the gladiator theme because we now could build our own universe. After we find a story and a setting we work hard at making the art and the mechanics support that story and universe. Even though Combo Fighter is a lighter game than London Dread we still try the best we can to make it a complete universe. 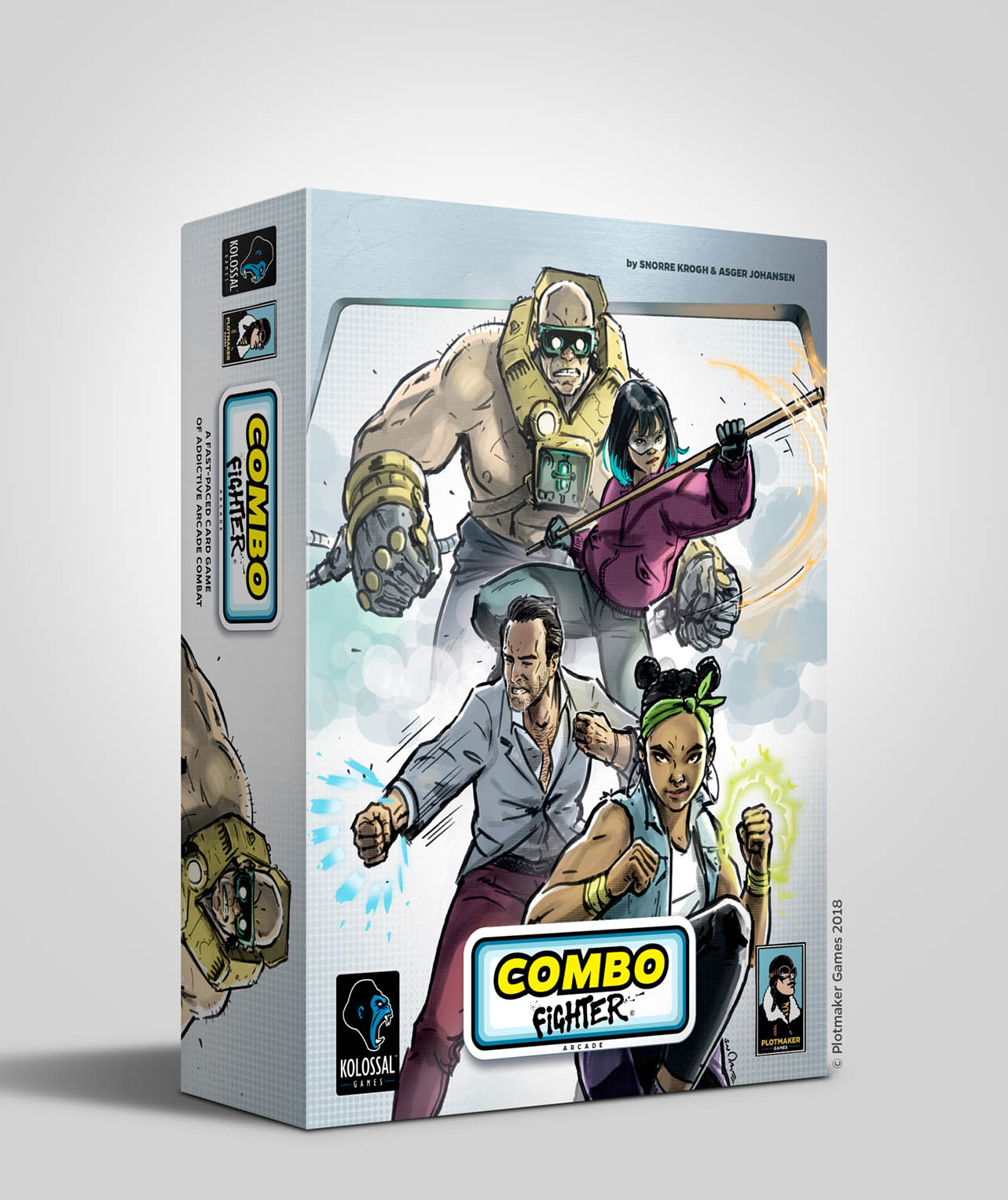 Any final word to the readers?

We are very excited about Combo Fighter. It is a special feeling to let go of your little darling that you have been nursing and working so hard at for so long. We are excited to get Combo Fighter out there and have people play and experience our take at a arcade game set on paper and cardboard. We hope you will enjoy it as much as we have enjoyed making it.

I want to thank Snorre for sharing his and Asgers story in such great detail. I tried the game recently at a small Combo Fighter tournament (which the game is perfect for). I had great fun and really felt this game is a perfect balance between speed, easy to play and advanced play skills. Good luck with the campaign. Take a look at the campaign page here.