Many of the artists that I have interviewed are more illustrators than graphic designers (even if that distinction is a fluid line) I would say that the man from Minneapolis, MN, I have at the table today is an all-round artist with a predominance to the design. He worked with several big game companies during the last decade and has a lot of experience in working with graphic design in games. Welcome Peter Wocken.

Tell us about how you became graphic designer?

I’ve been drawing for as long as I can remember, and have always enjoyed making art. I attended Minneapolis College of Art and Design (MCAD) and received a BFA in illustration. After school, I started out interning at Polaris creating decals for ATVs and snowmobiles, and have mostly had creative jobs since then.

How did you get into making board game graphic design and have you designed any games of your own?

I was working at Best Buy HQ when they went through layoffs, and I out of work. Rather than jumping at the first job, I was able to take some time to think about my career trajectory and what I really wanted to do. Fantasy Flight Games (FFG) is in a suburb of Minneapolis and I secured an internship with them, which quickly turned into a full-time job as a Marketing Graphic Design. After a few years of skinning websites and creating OP kits and BGG ads, I was able to join the Graphic Design Department.

You recently worked on Sagrada designed by Adrian Adamescu and Daryl Andrews but you have an impressive list of games you worked on. What are your best skills in board game design?

I play a lot of games. It’s important to understand how the decisions you make effect gameplay.  There’s a lot of user interface (UI) and user experience (UX) that goes into how the components are designed.  I’m always thinking about how to best help players quickly glance at the board state and see who’s winning, or what cards they have in their hand.

The Sagrada windows look absolutely fantastic. How did you decide on fragment shapes and colors? 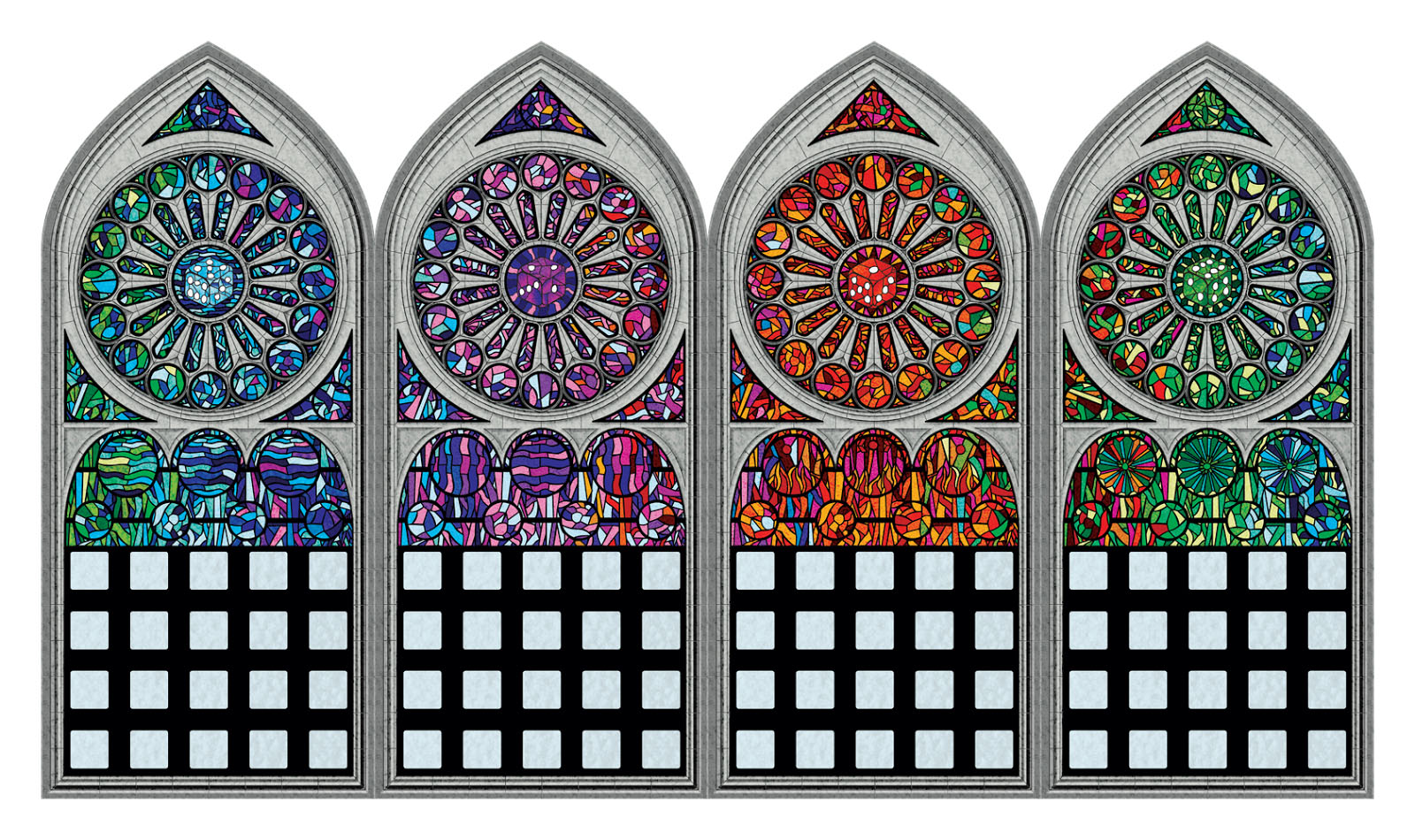 I went with the glass shapes based on what I saw at La Sagrada Familia.  The designs were inspired by the organic abstract shapes of the windows there.  Of course, in La Sagrada Familia, they don’t have dice in the windows, but it seems like we needed them in a dice game.  Color-wise, we wanted to have the player boards be primarily based on the player color.  We also wanted a gradient of colors between boards, so you’ll notice that if all the boards are side by side, the red spilled into the green and purple boards.

To the readers who have not been to Barcelona yet – La Sagrada Familia is an absolutely stunning piece of architecture that is still in WIP. So did you know the dice size when you started on them?

When doing the graphics, I knew that we were using 12mm dice, so the player board needed to be wide enough fit a 5×4 grid of dice, with enough space between the dice that the grid isn’t flimsy or warping.  Initially, the player boards were designed for two window cards to slide in, which is why they’re so tall.

Let’s talk about the design process. How do you prefer to be briefed on a job? Do you play the games before designing them?

I try to gather as much info as I can on the scope of the game before I begin.  I’ve started using a google form to gather basic info on their components such as how many unique card fronts and backs are there.  Do they know what size everything is?  How many diagrams are in the rulebook.  What’s their deadline?  If they can’t answer some of those basic questions, I know that they’re not ready for graphic design.  I have about 30% of my clients as first-time designers/publishers, and I end up needing to do a lot of communication to make sure that we’re on the same page.

Since I work from home, I don’t always play the games that I’m working on beforehand, since publishers are in a different state or country, but thankfully there’s Skype, emails, and conventions.  Since every game is different, I guess that communication is one of the most important parts of what I do.

What is in your opinion the strengths and qualities of graphic design for games opposed to the illustration art of games. And how should the two work best together?

It helps that I have an illustration background.  Graphic design in board games is more of a graphic artist position.  I’m constantly creating card borders, logos, and most of the other components from scratch.  My job is to make sure that visually the graphics and illustration both support each other.  I always like to see samples of what the illustrator’s done for the game/other projects so I can match the look and feel of their work.

A number of illustrators aren’t used to working on print media, so I also do a fair amount of adding additional bleed to their work or making sure that once the image is converted from RGB to CMYK that is doesn’t look significantly different. 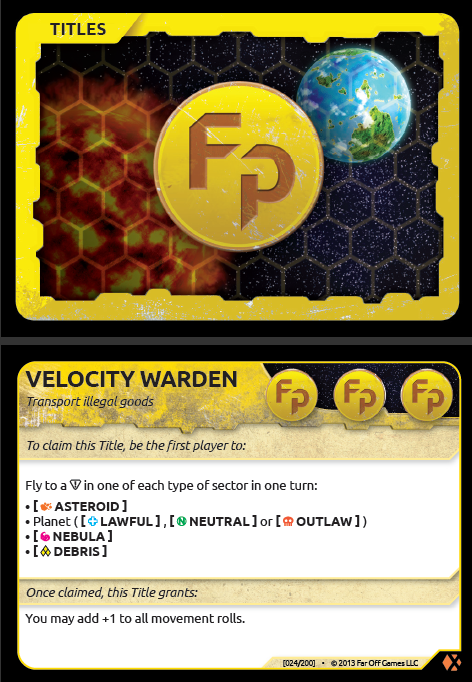 What makes a visually strong or good game design?

A visually strong game is the type of game that draws people to it.  In a convention or gaming store, it would be a game that gets a double-take and someone circling back to get a closer look at the game.  For good game design, that’s not for me to decide.  Hopefully, what I’m working on has been well playtested and is fun, but that’s the game designer and publisher’s job.  I just need to make it look pretty 🙂

Can you short describe your workflow – from your initial thought to the end?

Let’s go with the workflow of a card.

I start with sketches.  It’s easy to bang out a number of quick thumbnail sketches and I can snap a photo of them with my phone and quickly email them to the client for feedback.  It helps to get the dialog started on what they’re looking for.  From there, I may do additional sketches or some more worked up sketches, then it’s off to the computer.

Generally, from there, I pull it into Illustrator and do a quick mock-up of the card layout and design.  I don’t get into making it pretty or super fancy right away, but I get sign off on if the card has all the info that it’s supposed to have.  It’s a good checkpoint to make sure that the game mechanics haven’t changed since the contract was signed 🙂 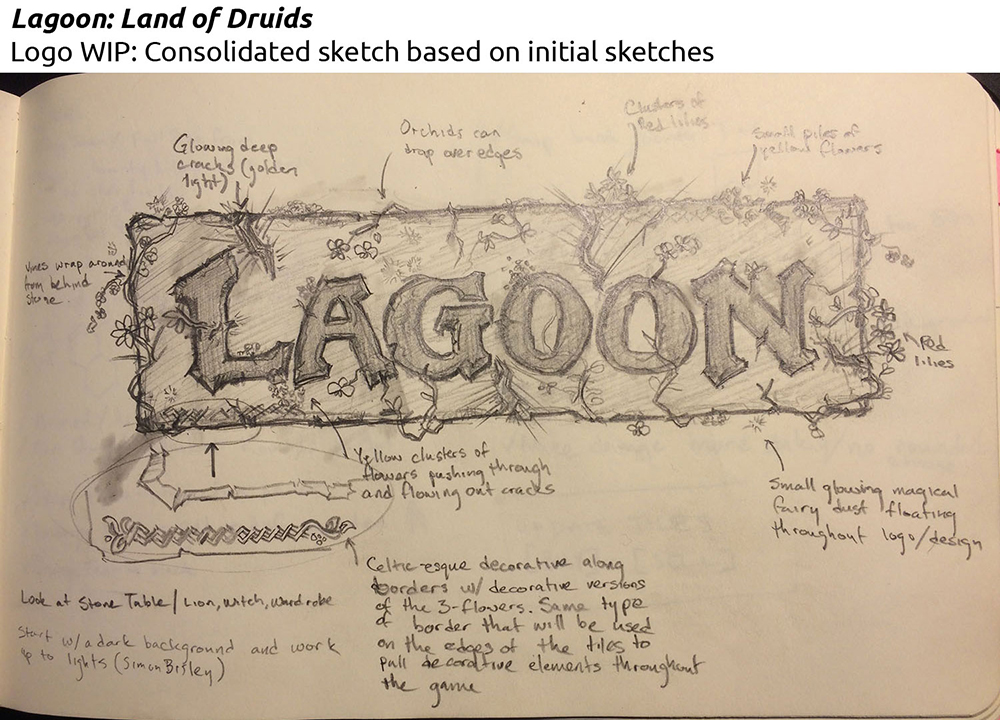 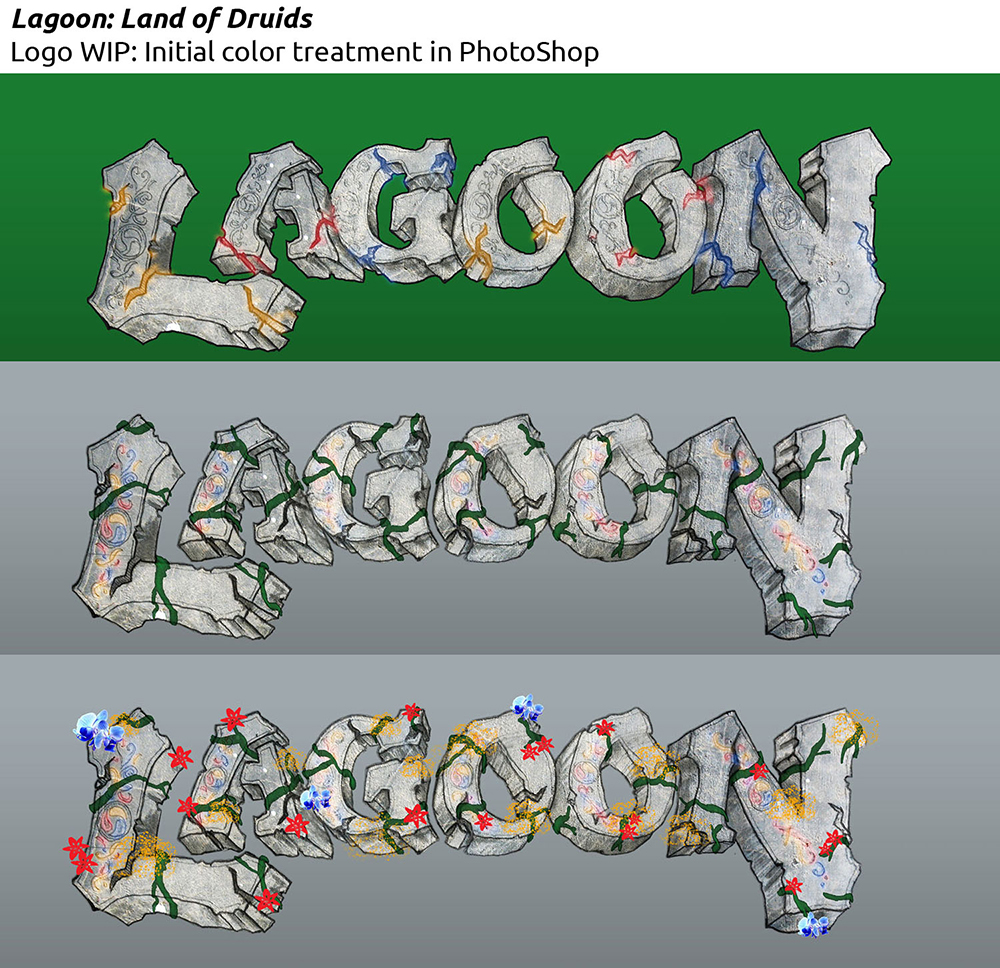 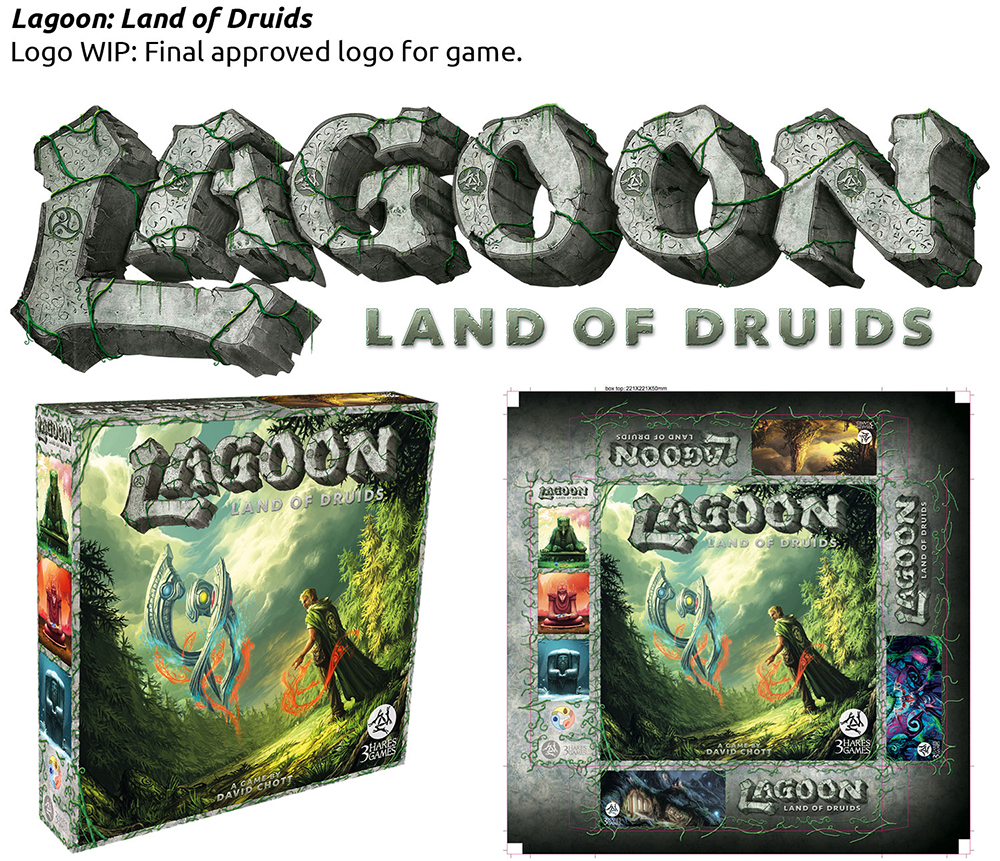 After Illustrator, I’ll pull the card into Photoshop and start adding layers and textures and other visual elements that are a pain in the butt to create in Illustrator.  Normally at this stage, I go back and forth with the clients on little changes/tweaks until everything is approved.

After I create all the various elements in Photoshop, I’ll bring the designs into InDesign and create master templates with all of the layers set up so it’s easy to place the illustrations on their own layer(s).  I also make sure that the fonts are looking good and that whatever card has the longest block of text fits nicely.  InDesign is where I get everything staged and prepped for printing, so it’s also easy to find RGB images that are trying to sneak in and create the PDFs that the printer uses to make the cards.

What mediums do you work with (traditional, hardware, software)?

When I was in school, I pretty much only worked with physical media.  I loved to use the ballpoint pen and then acrylic/mixed media on found materials.  It was a great way to learn how things interact with each other visually… plus I was poor, so I didn’t like the idea of paying to print off illustrations on the banner printer.

I currently use graphite in my sketchbook.  It makes it easy to create a black and white version of what’s in my brain, and it’s a really flexible medium.  All of the final work is done on the computer, a 27” iMac with an Intuos 4 Wacom tablet.  I use Adobe Creative Suite/CC, mostly Illustrator, Photoshop, InDesign and Acrobat Pro.

What is most important to remember when making graphic design for games?

If it looks great on your screen, make it 10-15% lighter.  Printing can suck the vibrancy out of a component or make everything look muddy.

If it looks great on your screen, make it 10-15% lighter.  Printing can suck the vibrancy out of a component or make everything look muddy.

Which games are you most proud of having worked on?

Sagrada has been one of my favorite games to work on.  I don’t generally have time to create all of the ends to end visuals on the entire game, so it’s fun to do everything.

Asking that is like asking which of my children I love best 🙂  A couple of other games that I’m visually proud of are Lagoon: Land of Druids, Tides of Infamy, and Bioshock Infinite: The Siege of Columbia.

Can you name up to 3 artists/designers which you personally are a fan of?

Jeff Easley, Peter Jackson, and pretty much any artist that has ever made it into the Spectrum books.

Do you have a favorite game?

I always go in waves on games, but I’m currently very hooked on Mottainai.

Finally – is there any place for inspiration, creative tutorials, personal shop links or other resources you want to advocate?

As I mentioned earlier, the Spectrum series of books is continuously inspirational.  I also follow a number of people/companies on Twitter that visually likes what I like, so it’s easy to get lost in a sea of links.  People such as Daniel Solis (@DanielSolis) and Howard Pinsky (@Pinsky) are always posting tutorials, and I enjoy leveling up my skills.

I always encourage people to visit my website www.BoardGame.design.  I don’t update it on a regular basis, but it’s got samples of a number of games that I’ve worked on, plus a few illustrations from back in the day.

Thanks for sharing your knowledge and insights on making game graphic design that rock.