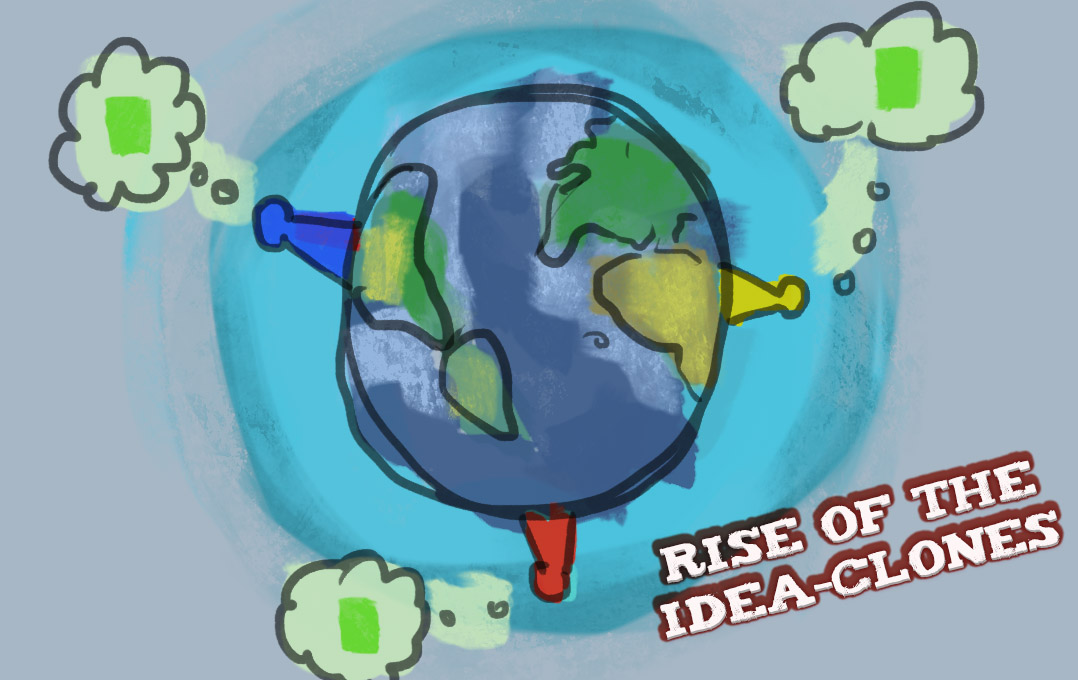 What are the chances?

We are all globally influenced by the same stuff; movies, games, books, art, etc. Especially now, when everything can be shared around the world in a matter of seconds, popular culture has become our 6th sense.

When a popular show like The Walking Dead scares you to the bone and creates vivid images in your mind, it will obviously be something designers watching the show will want to pursue. When a game has success with dice rolling as a main mechanic, we are not surprised to see many titles, like Pandemic, Bang, Race for the Galaxy, and Settlers follow along and release a dice version of the original game. The moment “tower defence” games spread online or a cube smashing/building game gets world recognition, designers around the world sit back and simultaneous think, I should make this awesome ninja vs pirates vs aliens, open world, tower defence dice-played game.

Ok, you think. But what about the completely original idea I had?!? 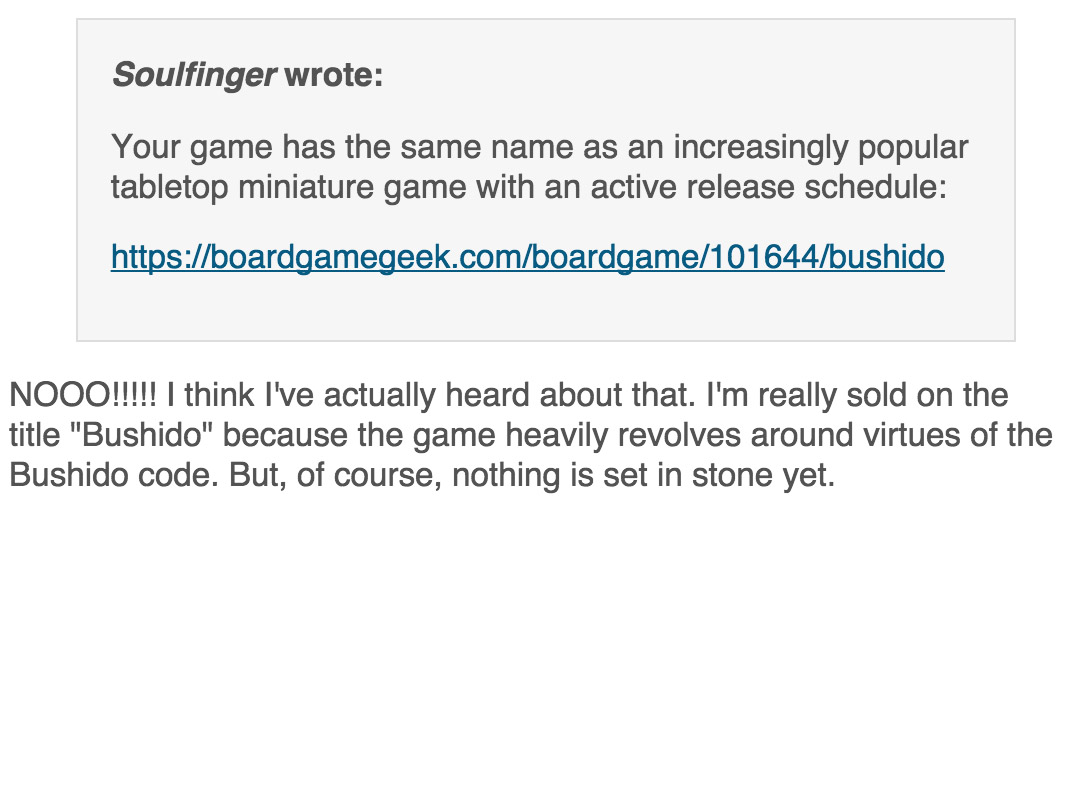 Look at this reply on BGDF. That guy was clearly surprised about his title already being taken. Titles are a subject themselves. He might think, this awesome exotic word I read on a Japanese history blog should be used in my game since it nails the essence of the game and theme … But I think we could all agree that Bushido is an obvious choice for a Japanese-themed combat game.

I experience this a lot and sometimes when you get it all on distance you realise you where a fool to think you where unique. Me and my partner have been working for some years on a similar themed game called Kensai/Kensei, which we in the same way thought had to be a unique game title – but only to one day see we were wrong. After a mood rollercoaster, I realised it is not that big a deal.

Of course, the world of possibilities is bigger than ever and we are all aware that we tend to create mass popular trends, as described above. But sometimes, there is also the chance that totally out of randomness randomness someone happened to get the same idea as you. (I would still argue that it could still be subconscious influences that triggers the idea) When this happens, many will be dispirited and downhearted. Designers by nature will pursue a uniqueness to their games. Whether it’s to find a market or maybe the dream of fame.

Unfortunately, our productivity is closely tied to our enthusiasm, which could be so damaged by the shock that your idea is not completely original  that you might stop working on the project all together. But read on before you trash it..

A crack of light

Let’s imagine that all the good games fit on a bookcase and there’s an open slot for your game. You lose faith when you realise someone put another title into that space. But like in a library, you rarely see just one historic book on Japan, but many titles on samurais, tradition, language, etc. So when the first blast of horror drifts away, examine how similar is the idea actually is.  Maybe there is the perfect spot waiting for it to be squeezed in between the others.

The number of games published with a specific theme or mechanic is closely related to the public demand for uniqueness. You might wish you haveidea monopoly [5] – but this is rarely the case. The further to the right we move, the more you have to stand out. But as this non-scientific graph (I drew) shows, it might not always be a category starter.public interest will rise with many good games sharing seats[6]  (“I love them games with dices..”). 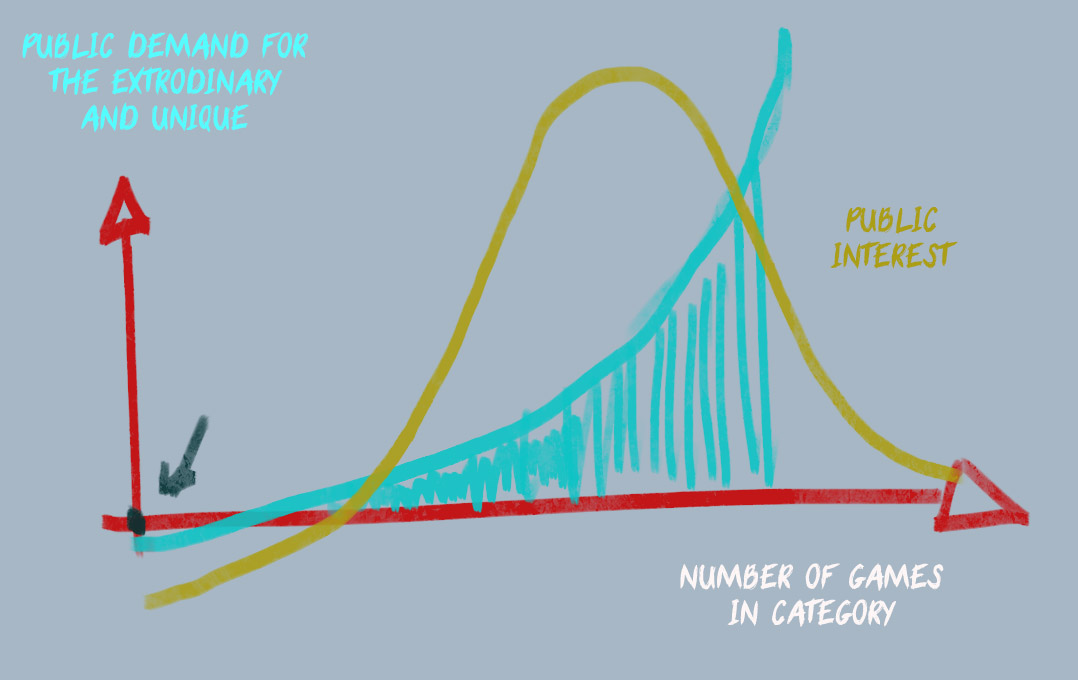 It is important to try to see which categories they share. Try to see how many branches there are on your game’s category and try put your game on a different branch[7] . If your game is about a Zombie u-boat, it would be a sub-branch of games with Zombies, but this could even have its own set of branches. 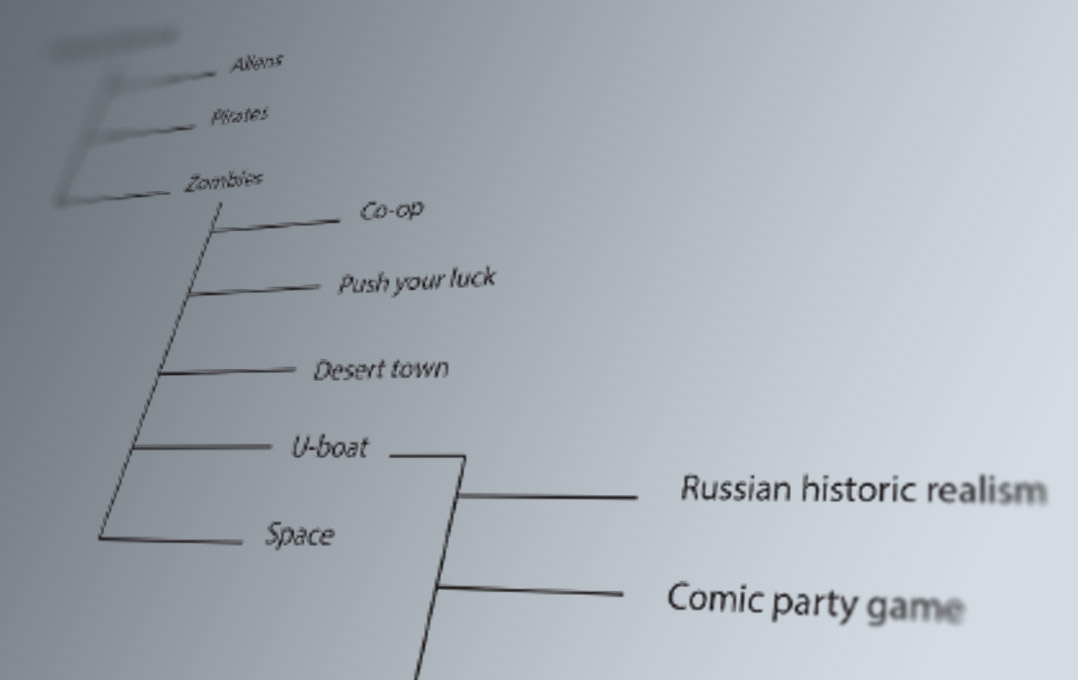 What should you do if you find another game with your idea?

How to avoid future idea-clones?

When starting this blog, I based it on the surnames of the team duo. It didn’t occur to me to do any research on the name, since I found it unlikely that there would be other GreenHook’s out there. Later, I “joyfully” stumbled upon GreenCouchFGames, Greenhook Studio Games  and GreenKnightGames which all may have made me reconsider the name.

I think most ideas I’ve had for games I have found online sooner or later, but many times my own ideas were very basic and without depth, so they were more likely to find clones. 10 years ago, GHG had fun trying to solve an idea of a samurai/ninja game where players worked with hidden pieces. The project got started,  but we had a prototype made. Then to my surprise a long time after, I see a game on KS called Rise of the Kage – which looked just like we imagined “our” game. But as I am trying to say in this article, it wasn’t that unique of an idea after all. Here is an image from our prototype and KS here. 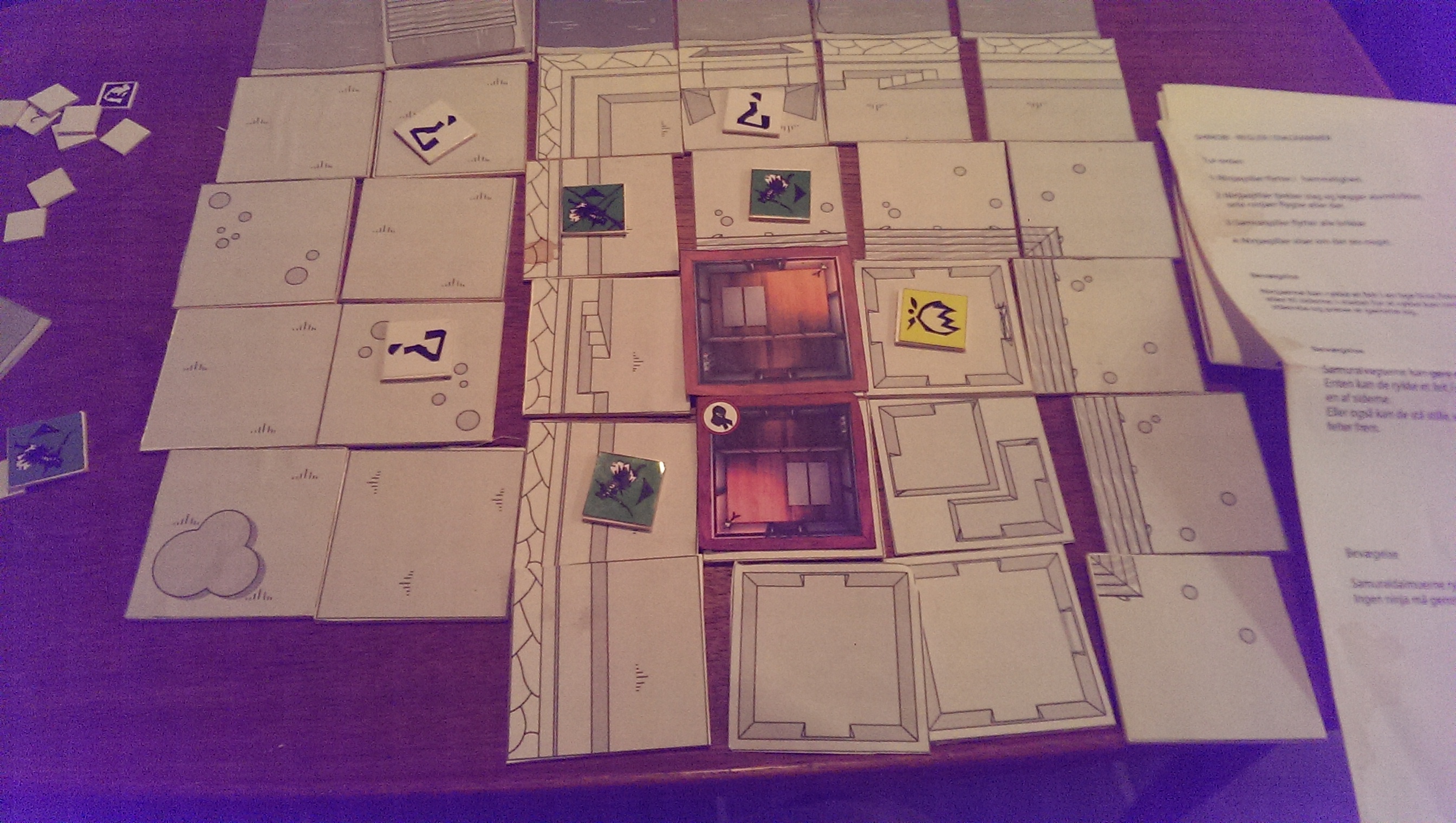 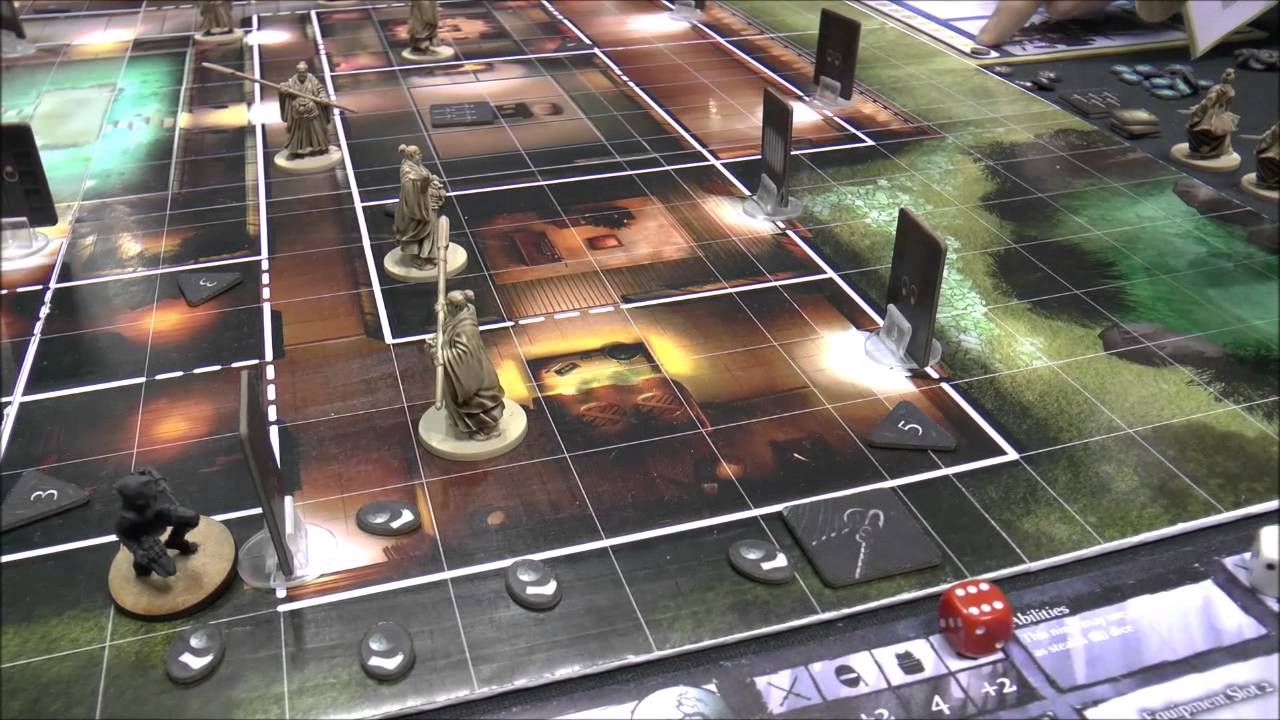 Maybe this article could help you think differently on your idea-clones. We would love to hear about how your game was run over. Please share your ups and downs in the comments.