A week ago I posted the designer diary from Grizzly Games on their new card game “Home on Lagrange“. If you haven’t checked it out yet – go here. They talk about how they collaborated with the artist Adam on developing the fabulous universe of Lagrange. I am excited to share this interview with the artist from Leeds himself to shed light on the artistic process behind the images. Welcome, Adam tell us a little about yourself.

I graduated from the Leeds College of Art (now Leeds Arts University) illustration degree a couple of years ago. Midway through the degree I began to get jobs; little bits for museums and educational projects. This was exactly the kind of work I really wanted to do; I’ve always enjoyed diagrams and informative pictures.

After the degree I worked as the Student President, and a colleague happened to be married to Callum, one of the Grizzly chaps. It was in this context that Callum approached me to pitch his Lagrange idea; which was right up my street as I read figurative tonnes of science fiction material, as well as watching a whole bunch of TV and film.

Not on a professional basis; however when I was first discovering photoshop as a young sprog I made fake Yugioh cards to dupe friends (unsuccessfully); since then I’ve been looking for an excuse to work on a real game.

What do you like in a brief on a new assignment?

Specificity can be easiest; however there is plenty of fun to have with a client or collaborator open to some meandering experimentation (and indeed if there is the time for it).

Can you tell us about your creative process when making a piece of art for the game from start to finish?

Off the bat I had a few ideas which I bashed together in Photoshop, this was followed by the more traditional pen-to-paper scrawlings in my sketchbooks.

For reference I collected a lot of reference material pertaining to 1970s futuristic artworks, since that’s the sort of thing the Lagrange game was going for. This was followed by more sketching to figure out the format and content of cards. There was a lot of constructive back-and-forth with the Grizzly lads to get what they had in their heads manifested as drawings. Once I had solidified a few cards it became fun to push the limitations of the format.

In brief, the process was sketching, followed by line-art and colouration; with amendment phases sprinkled throughout. 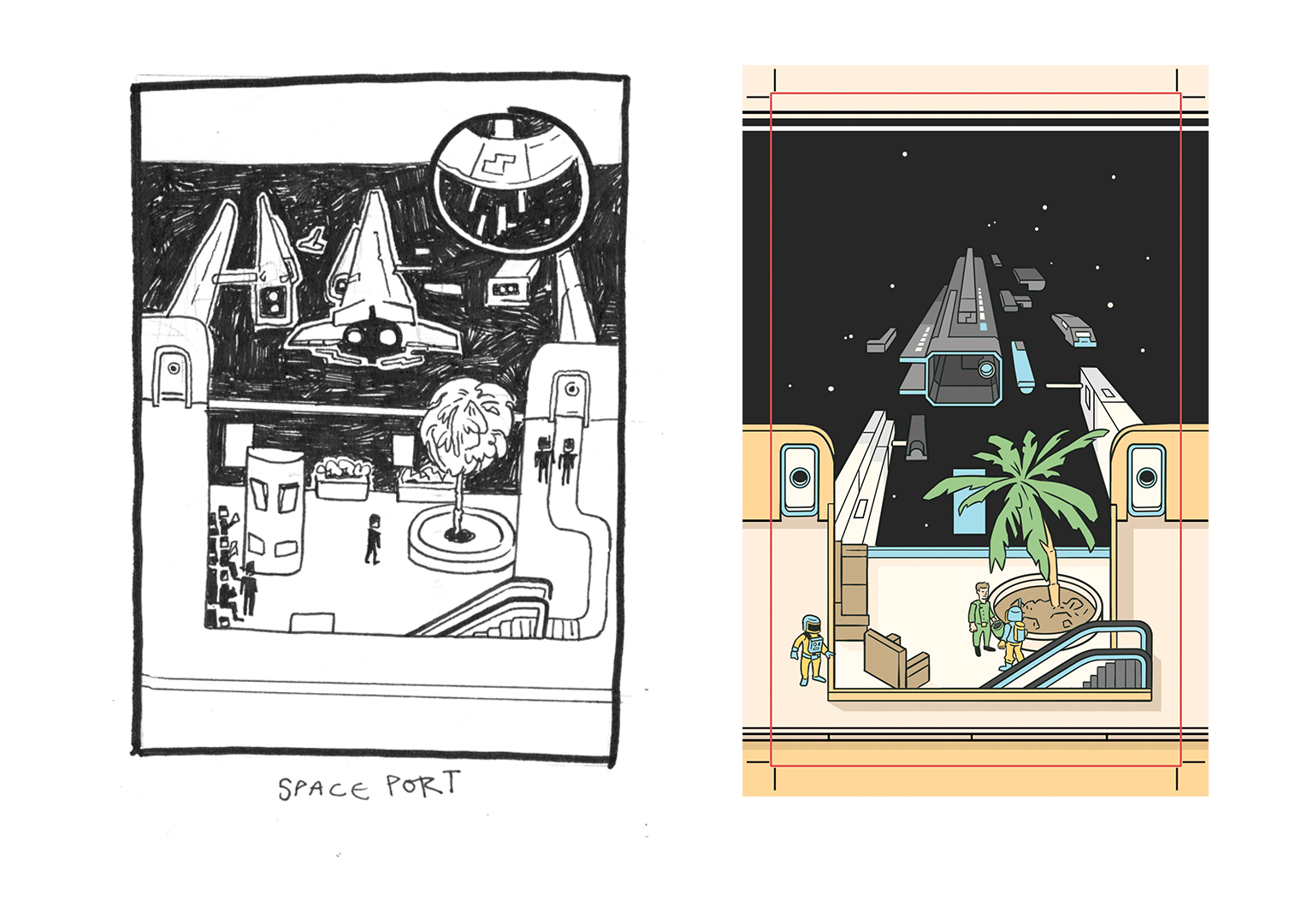 When I sketch, it’s mostly with pencils and fineliners, but I predominantly use a Cintiq for finished artwork; which is a screen one draws directly on. I currently inhabit Duke Studios in Leeds; it has a lovely cafe-library atmosphere of productivity and the folk there are lovely. 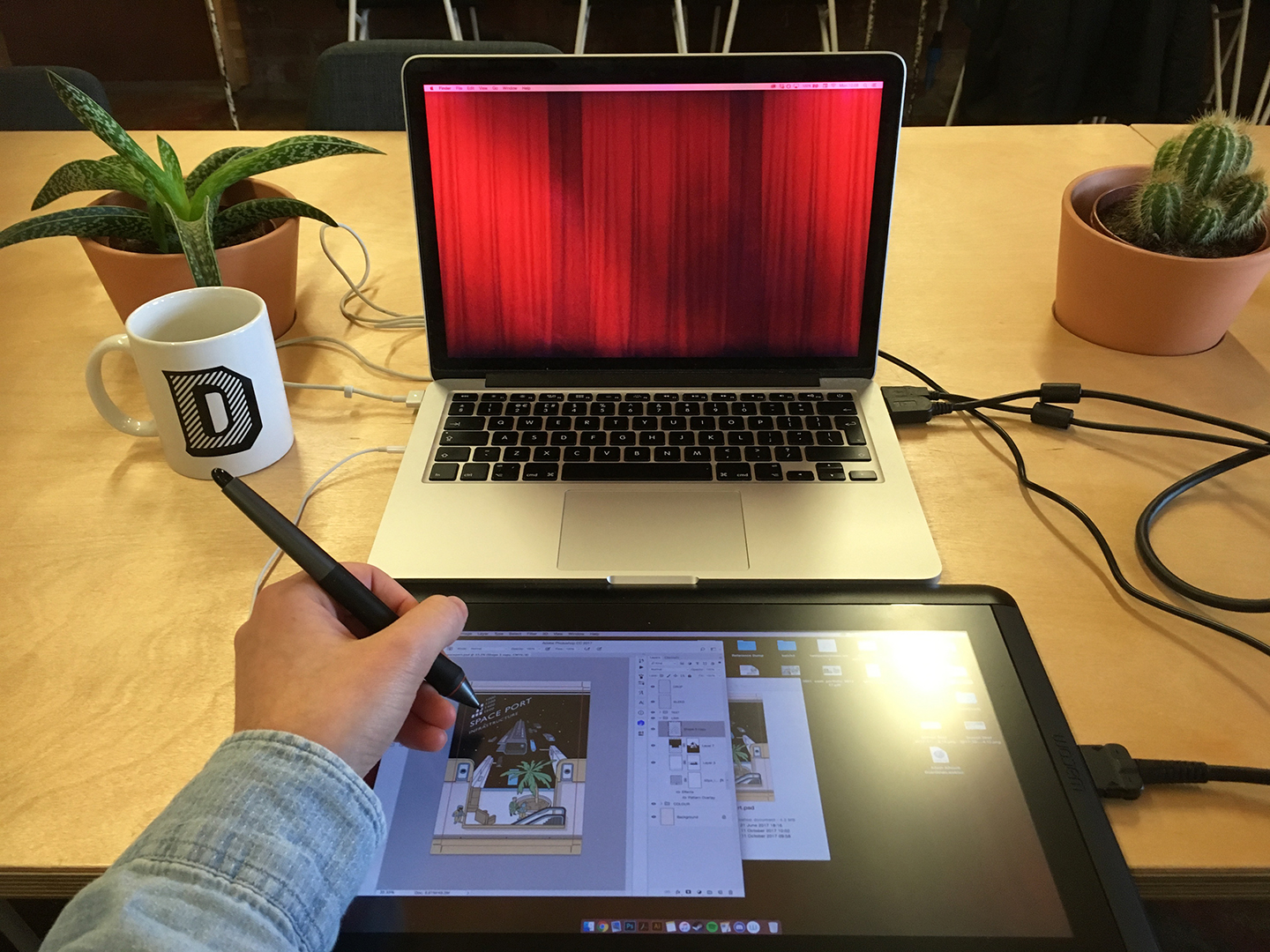 The pictographic stylised look for Home on Laragne looks awesome. It reminds me of one of my favourite artist Chris Ware. The isometric look add some flavours of game and science. How did you find this style and what drives your work?

In a kind of blasphemous way, I had no idea about Chris Ware until a few years ago when I saw him at ELCAF in London, I think he is rather good. My primary reference has always been Hergé, the illustrator of Tintin; they were probably the first books I read independently as a child. The isometric angles I like to use comes from prolonged staring at Dorling Kindersley books.

What do you think make strong or good game art?

I reckon ‘glance-factor’ is the most important element to games. I find it similar to character design in animation or video games. If you can glance at a card or board and quickly understand what it represents, then its design has succeeded. Besides that any tone can work in the right context.

I reckon ‘glance-factor’ is the most important element to games

Have you learned anything from the process on Home of Larange?

I learned that I can get a lot of drawing done on a 10-hour flight. One just pops the wacom and laptop on the folding tray, and you’re all set. The Grizzlys have been a pleasure to work with throughout, and working with them to establish a sort of formula or visual language to the game improved the structure of my process.

One of my wonderful art teachers at school had a very simple mantra; ‘The more you do boy, the better you get’. It’s true.

What are your future projects?

I’m currently working on an unannounced book; so stay tuned!

Finally – is there any place for inspiration you want to advocate?

Anything has the potential to be inspiration; a nice rock in the woods or a background prop in Star Trek: The Next Generation. I would say the my primary source of imagery is from watching film and television. I am a particular fan of going to Hyde Park Picture House in Leeds, it has a very pleasant atmosphere, and they frequently show cult, indie and classic film alongside regular programming.

Thank you Adam for sharing your story. I hope the project will rally the backers needed.  Should anyone want to see your portfolio it is to find here aaab-illustration

If any readers did not see the Grizzly diary it is here.