Yes there is AAA game productions and now there is TTT 😉 but before you download the Free TTT label read on.

Recently we have been looking deeper into Tabletopia and the future of digital boardgames could be interesting.

TT is offering designers an engine to realise their game digitally and it might be possible to build stuff that would be hard to realise in real life.

But how unrealistic may the features be  –  ai control, automated actions and so on, before designers start creating games that is more digital than it is a board game? Is the stunningly beautiful steam game Armello a board game or not? Where do we draw the line?

It is going to be interesting how TT developers are going to tackle this issue. It seems like they want to control the playing possibilities in some ways. Take the rolling of dice in TT compared to TableTop Simulator. TT dices, and other pieces, have a very limited amount of physics applied. This means you could not make a physic based game like Flick’em Up . Nor is it possible at the moment to build games in several levels like Colt Express.

The good thing about limited physics is that “normal” games are easier to play and don not end up in people making a mess of all the pieces. Time will tell how many possibilities designers will have in the TT editor.

If they later on implement ITTT kind of code to the game editor it would be possible to make games that was like computer games and is that ok? Then it would be possible to trigger events on player actions, as when someone put this card in that pile everyone gets xx. Take a computer game like Little Big Planet that had its own level builder – wow did that community explode!

Tabletopia is different from the real world. Players only exist as a cursor and maybe a voice

Tabletopia is different from the real world. Players only exist as a cursor and maybe a voice (soon video too) and game setups can be more complex that anyone would care to play in real life. No doubt many designers will make games that only can be played on TT. 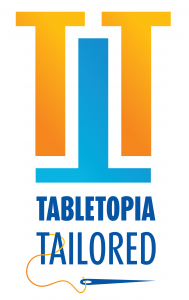 We want to promote all games made exclusive for TableTopia. These game are tripple T games – they are Tabletopia Tailored. So we made a label that is FREE to download, modify and use commercially.

There are no specific rules about when a game is considered TTT – You as a designer may use it as you wish. It is up to you how to use it – but if it is put on the box cover somewhere people can navigate for it when choosing a game to try. 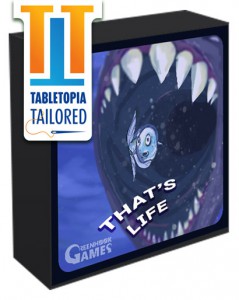 TTT by Greenhookgames is licensed under a Creative Commons Navngivelse 4.0 International License.
Please keep us updated here if you use the label so we can take a look at you game 🙂 We at GHG are planning to launch a couple of TTT games very soon. We will get back to that later.