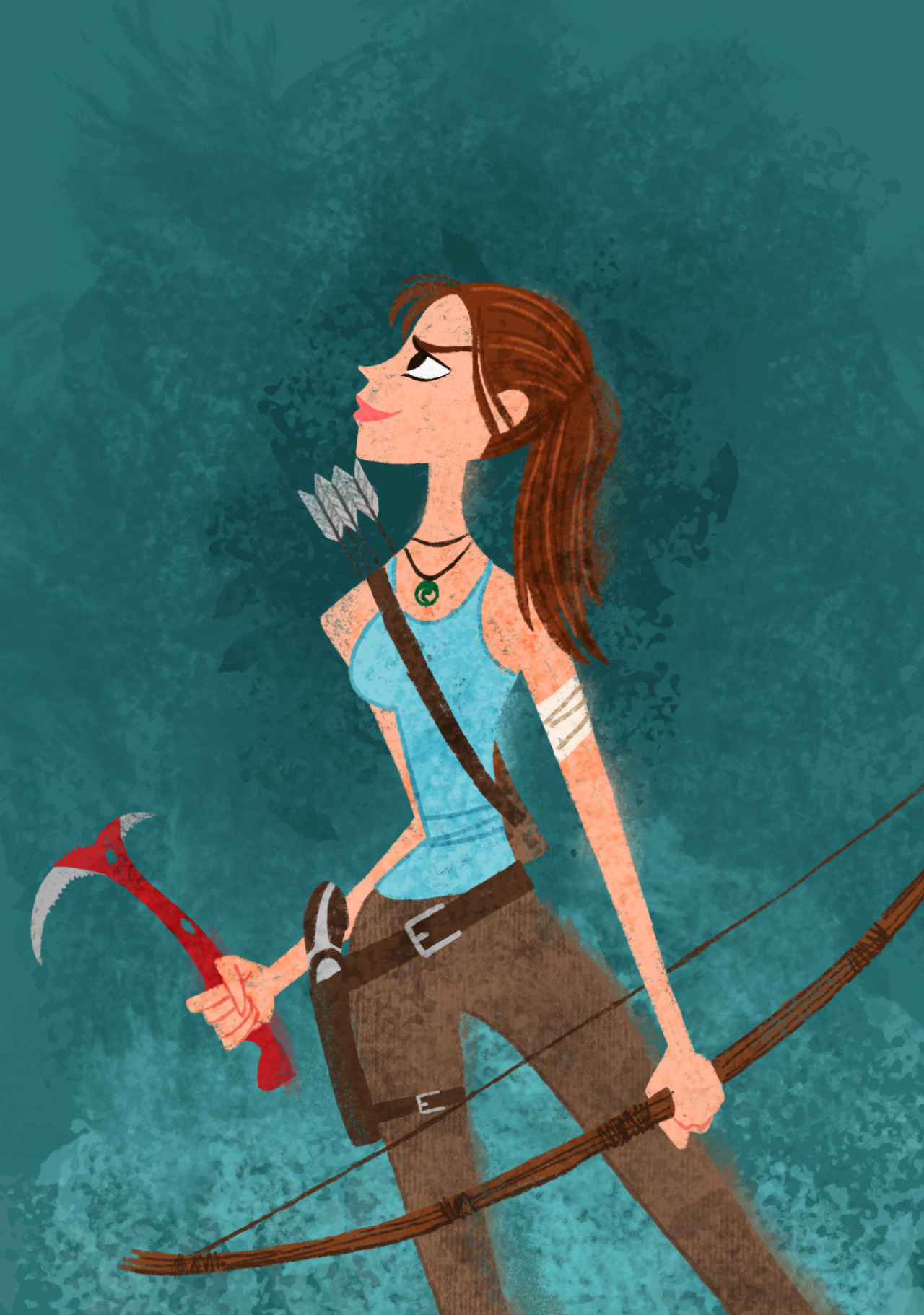 It didn’t make us rich.  But it started us on a really good partnership!

The first game we made was called Now Boarding (which we recently converted into a completely different and all new cooperative board game).  After we made Now Boarding, we made some other stuff, and eventually got around to making Paperback. This was the first game that we kickstarted.  It was successful. Yay! Then along came Burgle Bros. That was REALLY successful. After that, I think we decided that this was what we wanted to do for the rest of our lives…depending on how long we lived. 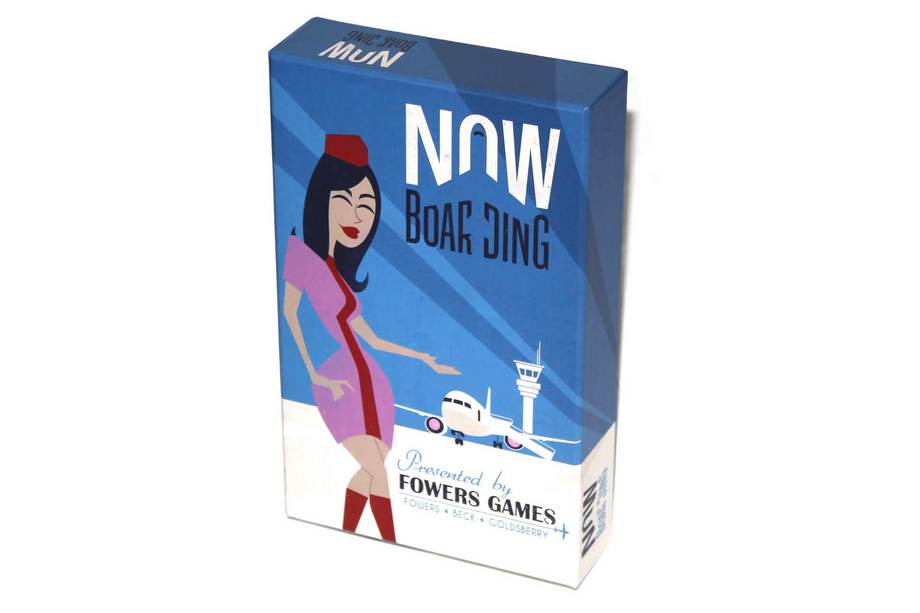 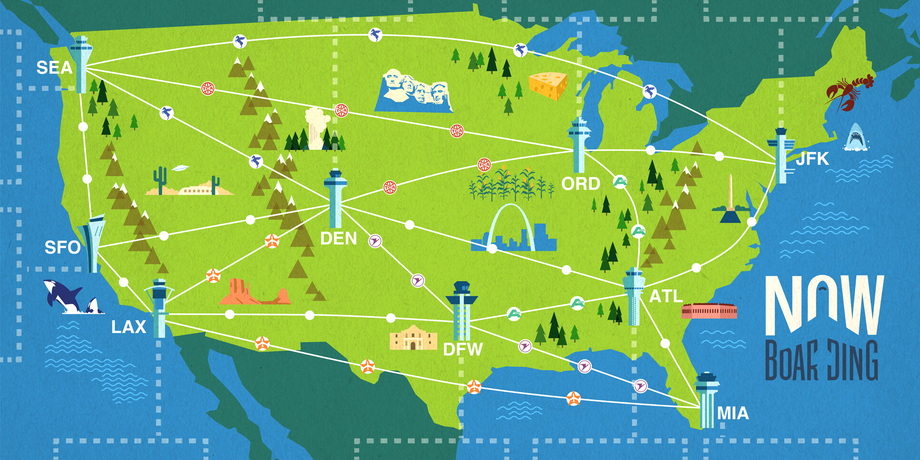 And that’s how I got into making art for all these games.  Tim Fowers mistakenly thought I had the illustration chops to draw his games, and I naively thought I could do it, and we’ve been stumbling through it ever since.

What should be included in a good brief for a new assignment?

Here I have to mention that I’ve only ever made games with Tim Fowers and Jeff Beck, both of whom I’m friends with.  So, our business relationship is very casual. Both of those guys are always working on games. Always designing and testing something.  Once they reach a point where a game is working and they want to bring it to kickstarter, they call me up (they both live in Utah and I live in California).

They explain the game to me, and tell me what kind of art pieces that they’re going to want for the kickstarter campaign.  Our games typically have very strong themes so we’ll talk a lot about that and figure out what characters we want to use (or what characters may return from previous game).  And figure out the story. It’s all very organic and casual and involves a lot of discussion. Eventually when we’ve got theme, characters and story all worked out then they provide me with a list of all the assets they’re going to need and I start plowing through them.

We’re in contact with each other regularly as I work through the art.

This all works because we have a close relationship and understand how to work together. 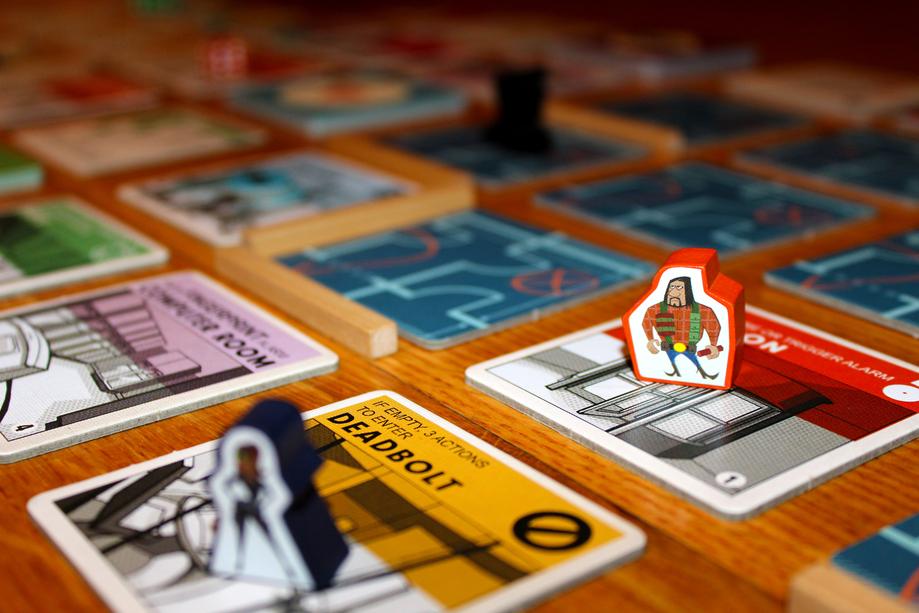 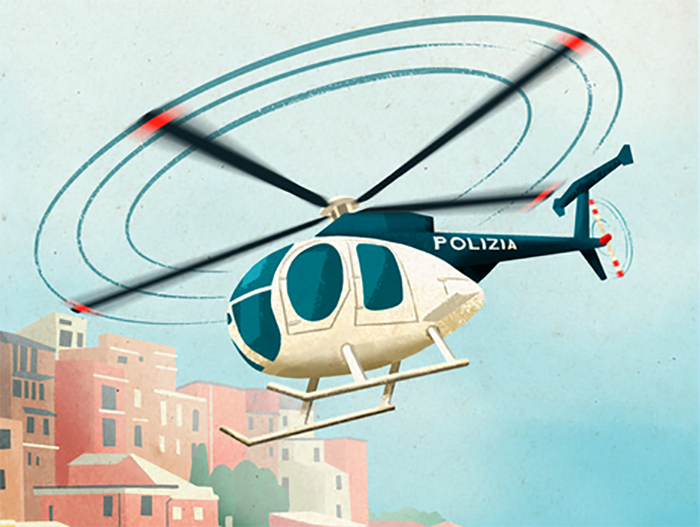 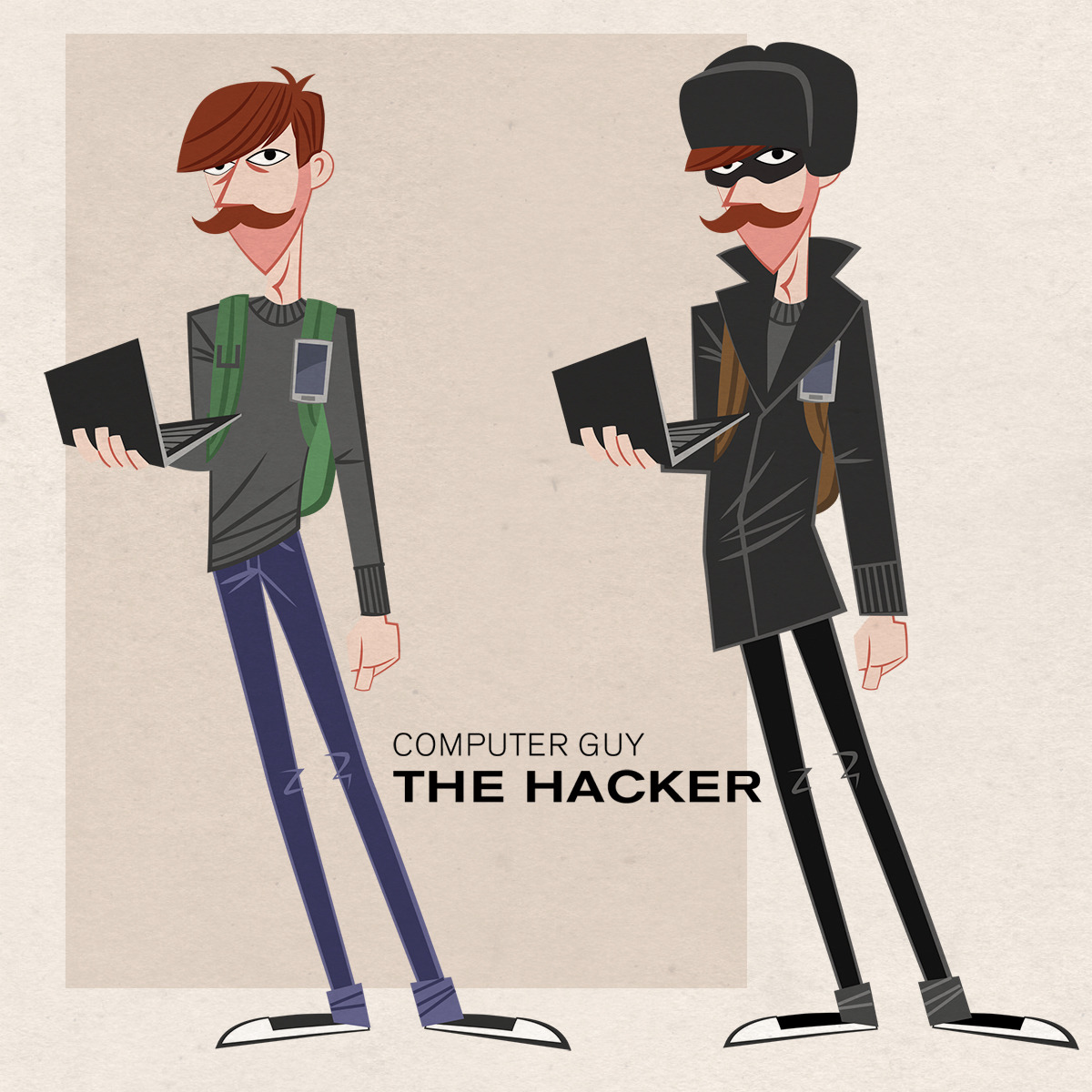 If I were to work with someone new, I suppose the first thing I’d ask is what art that I’ve created do they like best.  Then I’d ask them what kind of style they have in mind for their project and what is the theme. Then, I like to get an explanation of what the game is, and how it plays.

After that I’d want to see a detailed list of all the art they need so that we can figure out timeline and cost.

A lot of your work includes strong character designs. How do think about when you create characters like Hawk, Ophidian etc.

Character design is one of my favorite aspects.  I love the challenge of inventing a new person. I’m very influenced by movies and cartoons, so when I need to design a character, I first figure out what my character is like.  What the personality is like. Then I try to think of times I’ve seen these kinds of characters in film and use that for inspiration. After that, I try and diverge from that inspiration and attempt to come up with something fresh and new. 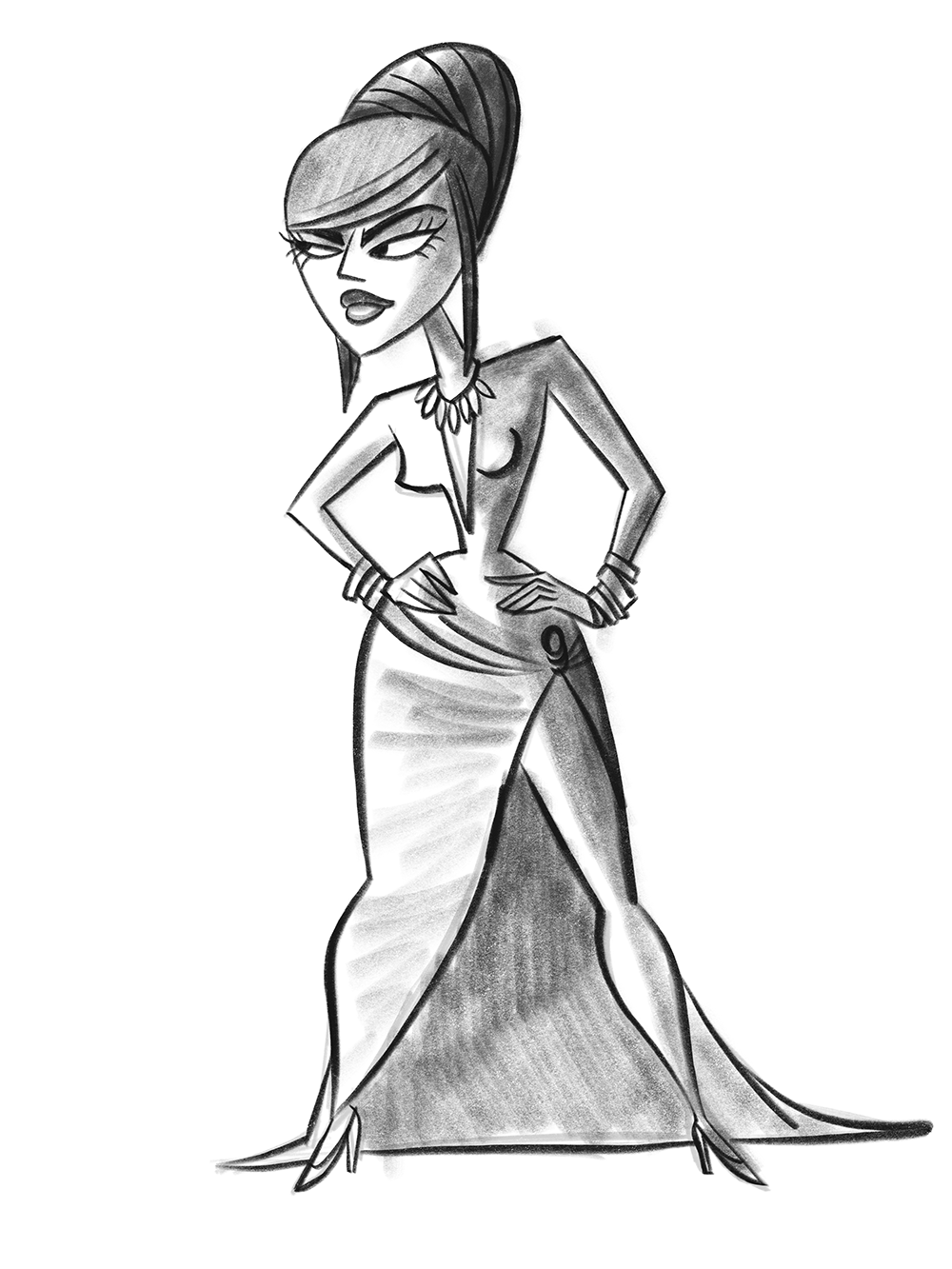 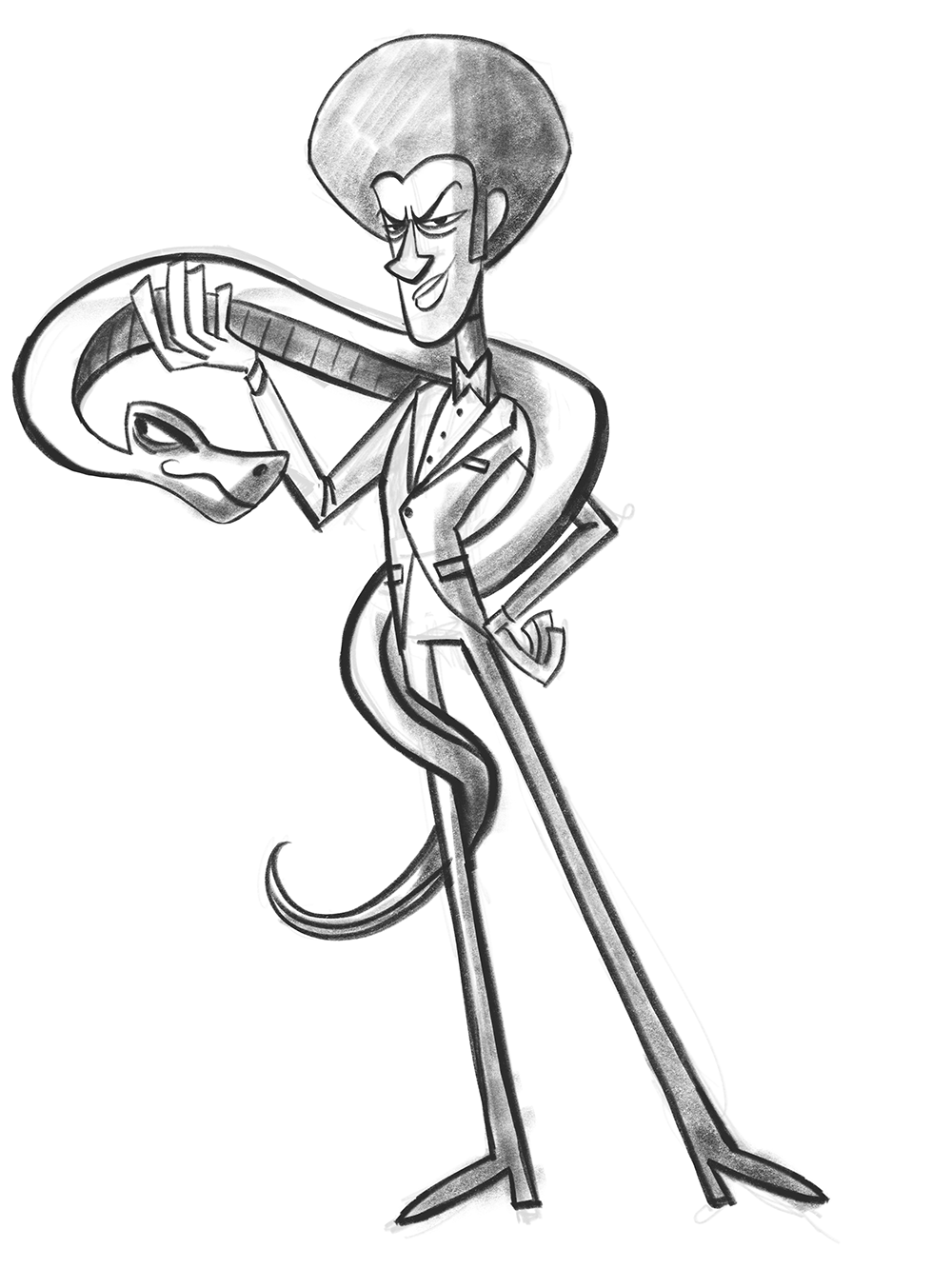 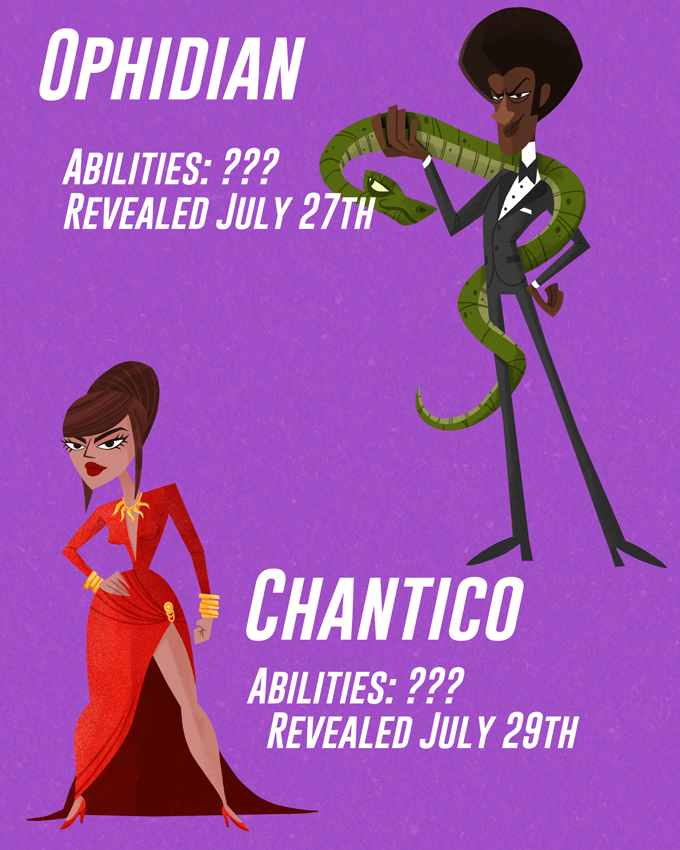 You have a wonderful style that to me reminds me of the 60’s cartoon styles with flat and skewed perspectives and pastel textured surfaces. What do you think this artistic styles advantage is and do you ever step away from it?

I love this style.  The main reason is that it’s fun.  I spent a lot of time in high school and early college drawing these hyper-real pencil and charcoal drawings and portraits.  Eventually, that became kind of a drag for me. It got tedious. When I got into animation classes I started watching more and more mid-century cartoons and I realized how much I like it.  I learned about animation from UPA and Hanna Barbera. I discovered artists at Disney like Mary Blair and Tom Oreb. They became my influences.

I think my art is always evolving, and I’m always getting influenced by various different things.  So, sure I think I’ll try different styles. But I think it will always be somewhat loose and heavily based on strong shapes, colors and textures.  I don’t think you’ll ever find me doing the standard fantasy type of art that you can find on ten thousand different Magic cards.

Can you tell us about the different steps in creating a piece of art for the game from idea to sketch to finalizing?

First, I look at reference materials. I can’t overstate how important good reference materials are.  I might spend hours looking for good references, but it saves me so much time in the end. After that I start sketching on my ipad with the apple pencil.  My early sketches are so ugly I don’t show them to anyone. Once I have something remotely decent, I’ll do a final sketch, and show that to Jeff, or Tim (or whoever I’m working with) and get feedback. 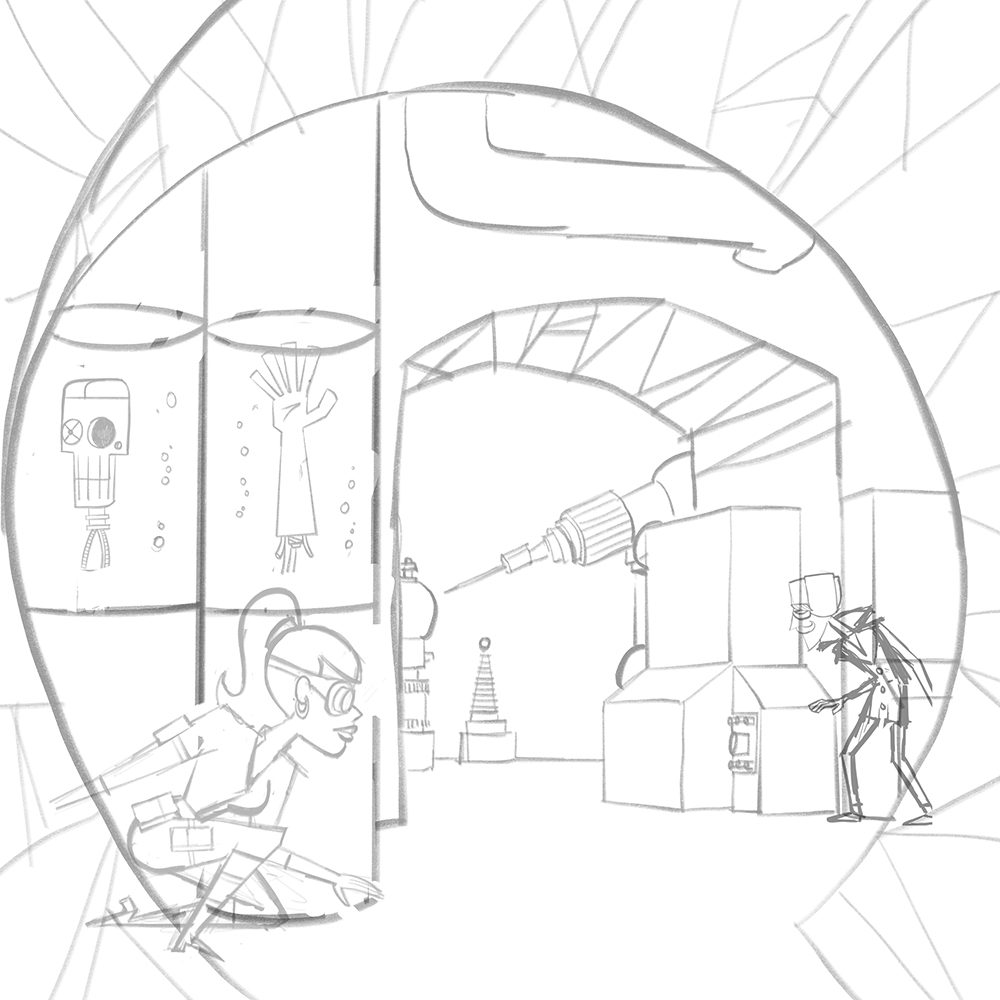 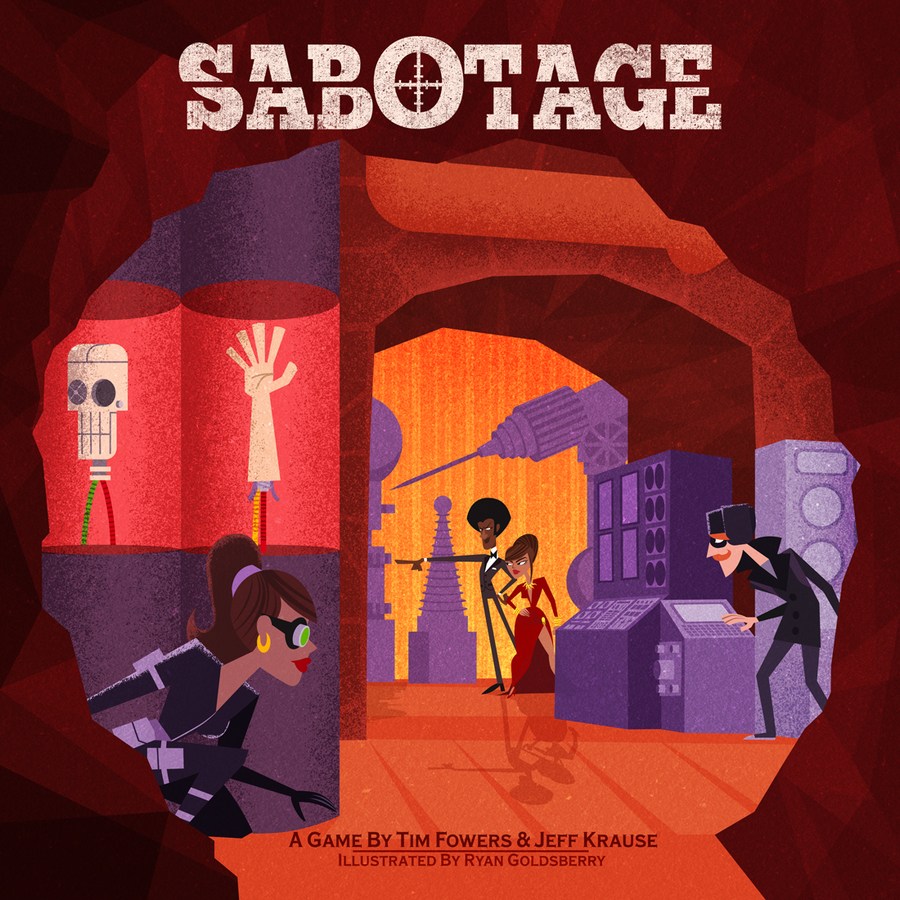 Once the sketch is final I’ll start thinking about colors.  I often try and put together a palette of main colors I’m going to use.  Once that is done, I paint it! Nowadays, I do most of the painting on the ipad, and then at the end bring it into photoshop for some final touch up, textures and color editing.

Do you ever feel like a design is not working the way you want and how would you fix it?

I’m notorious for scrapping things if they’re not working.  I hate when it happens, but it does happen. If something really isn’t working I’ll give myself a short amount of time to try and make it work and if I don’t succeed I’ll often start over and come at it from a different angle.

This happened recently with the cover for Jeff Beck’s Getaway Driver game.  I sketched out the art, and thought it was working. Jeff said he liked it. And I started painting.  But about halfway through I realized that it just wasn’t working for me. It seemed stagnant and dull.  So, I told Jeff I wanted to start over! Privately, Jeff probably swore and punched a wall or something like that, but then he said he trusted me and go for it. 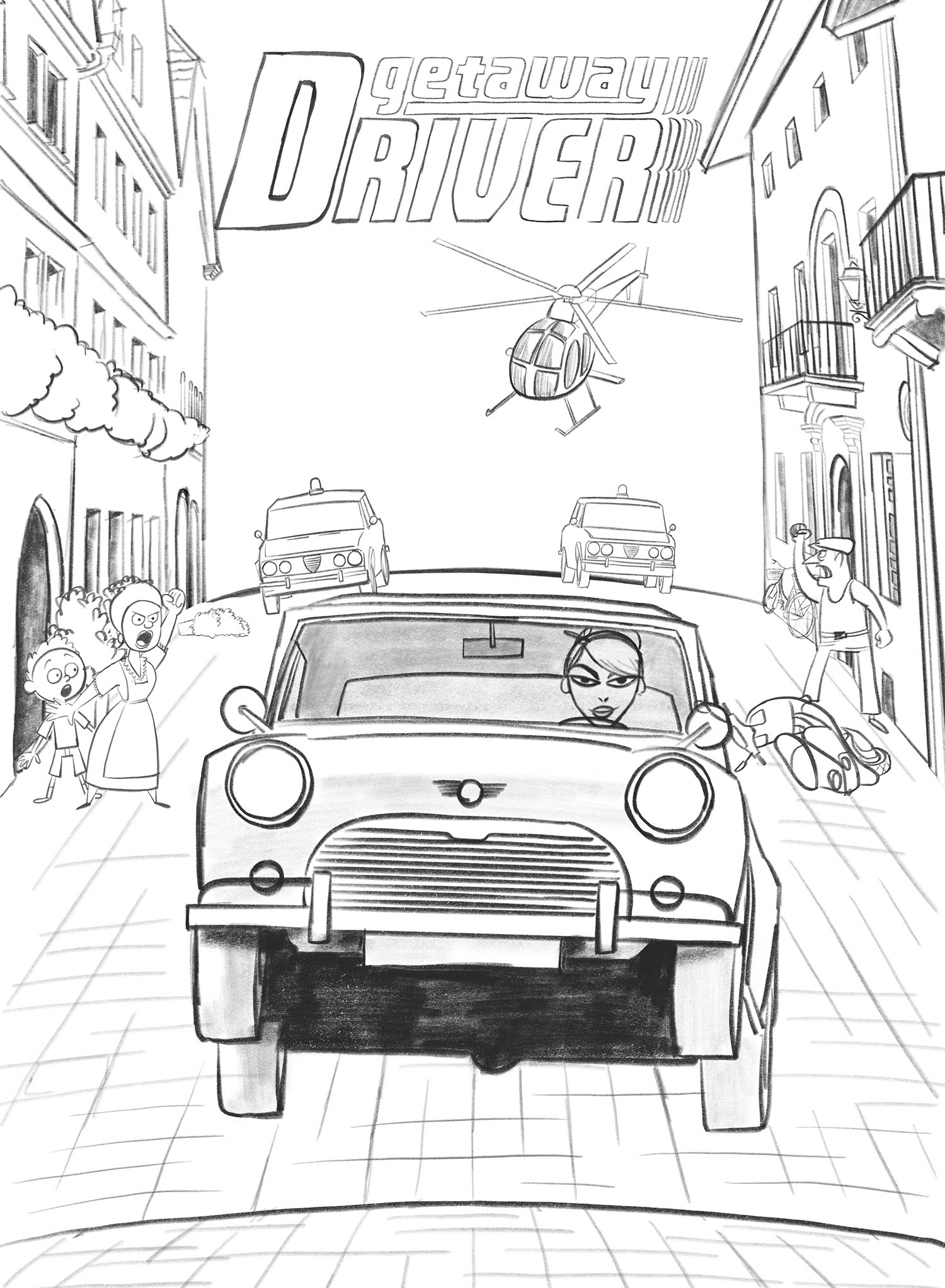 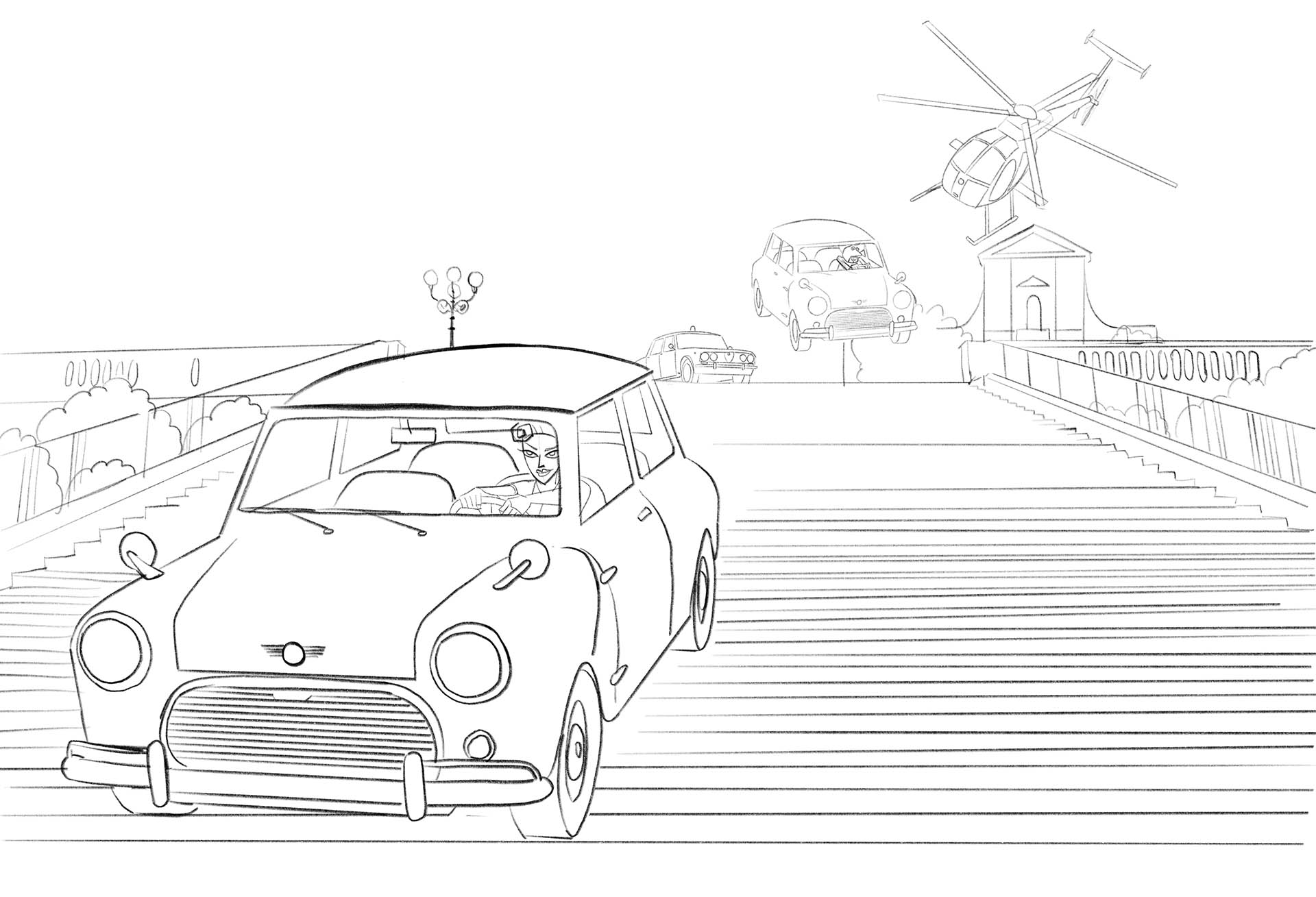 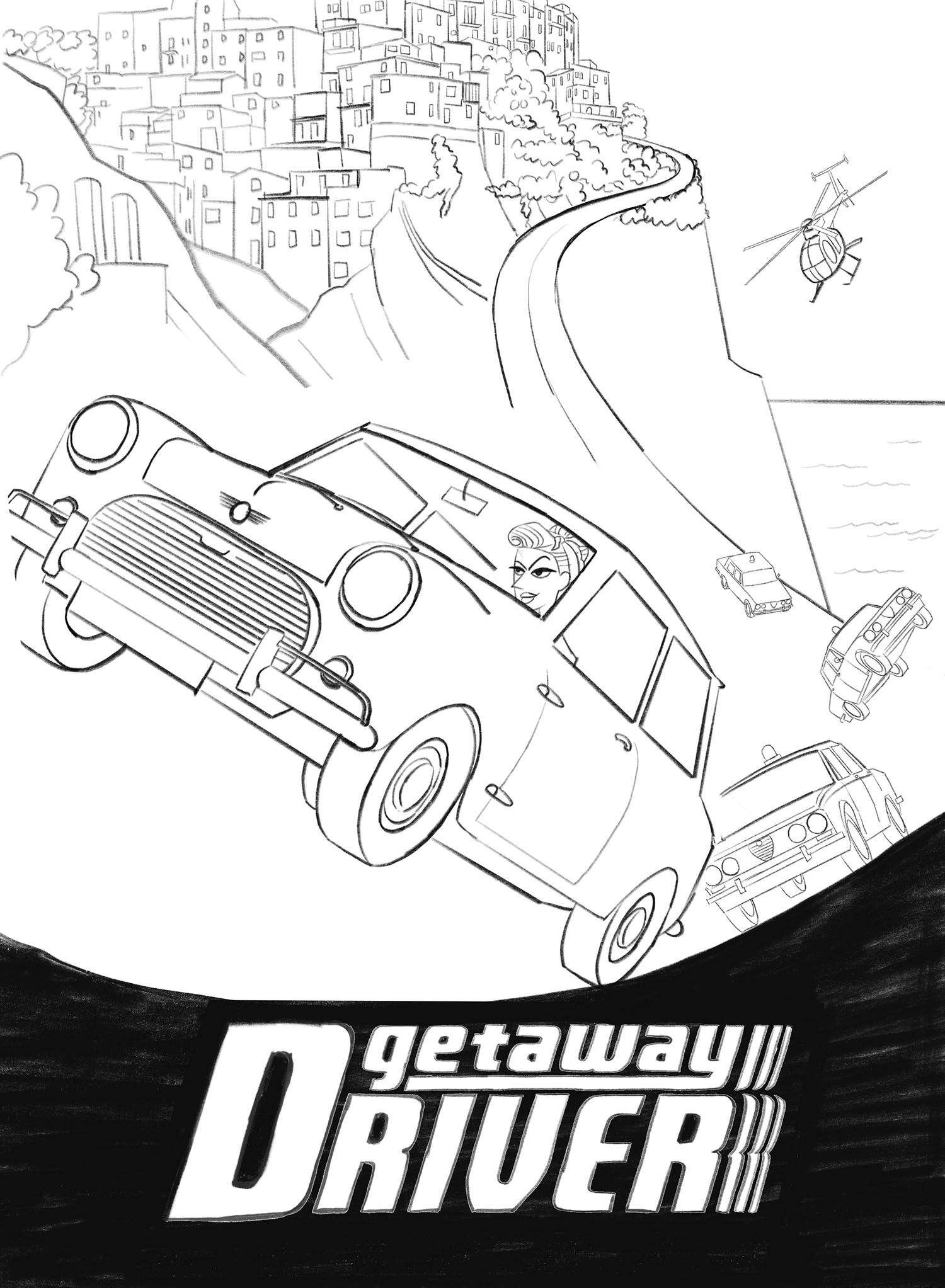 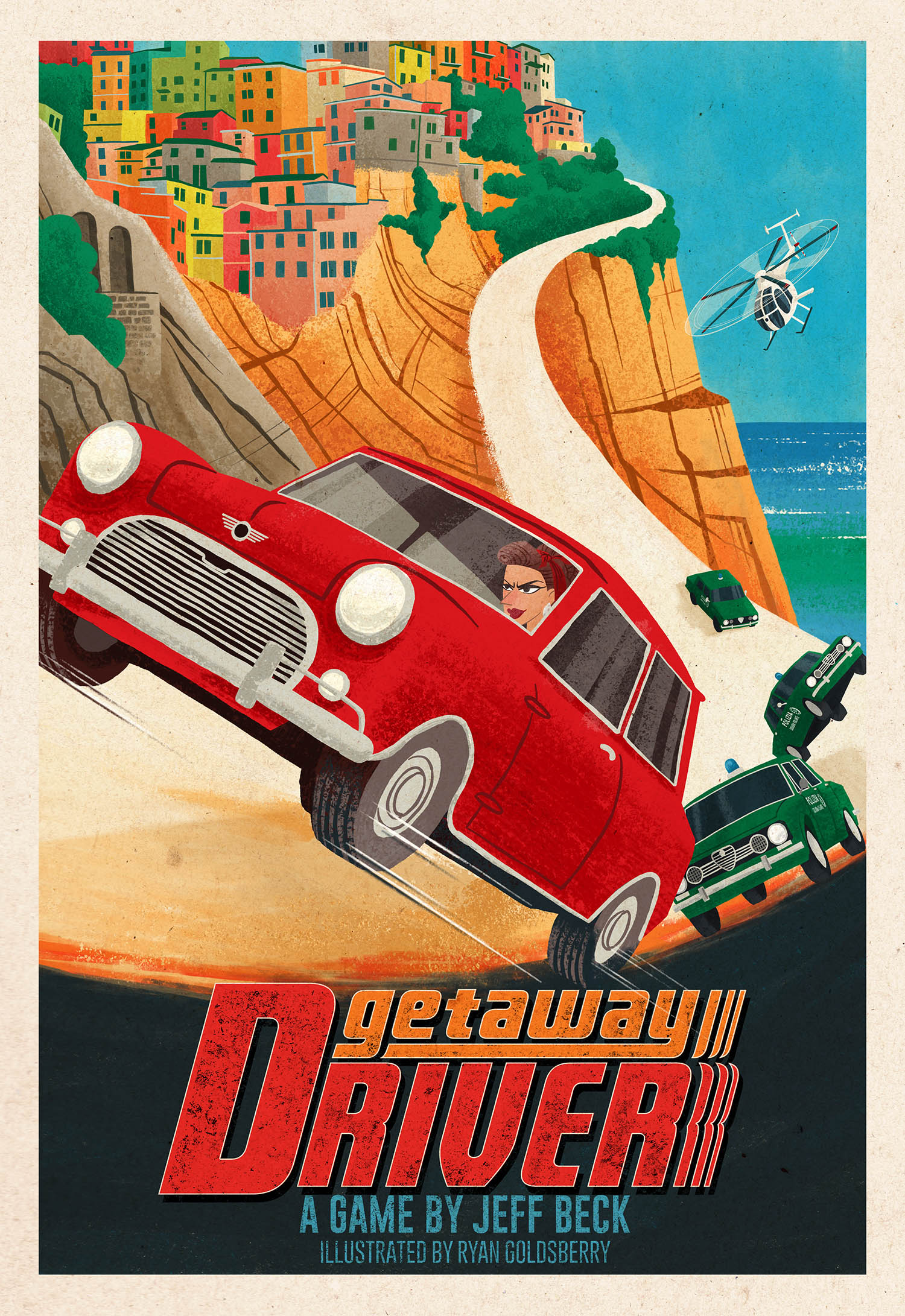 Tell us about your preferred tools and your workplace?

I have a big family.  A wife and five kids. That means I don’t have a workplace.  It sucks, but what can you do? So, my work is done on my laptop and ipad and I work wherever I can sit down and have access to wifi.

On the ipad I work mostly on Procreate and Affinity Designer and on the laptop I work in Photoshop.

What iPad size is that? 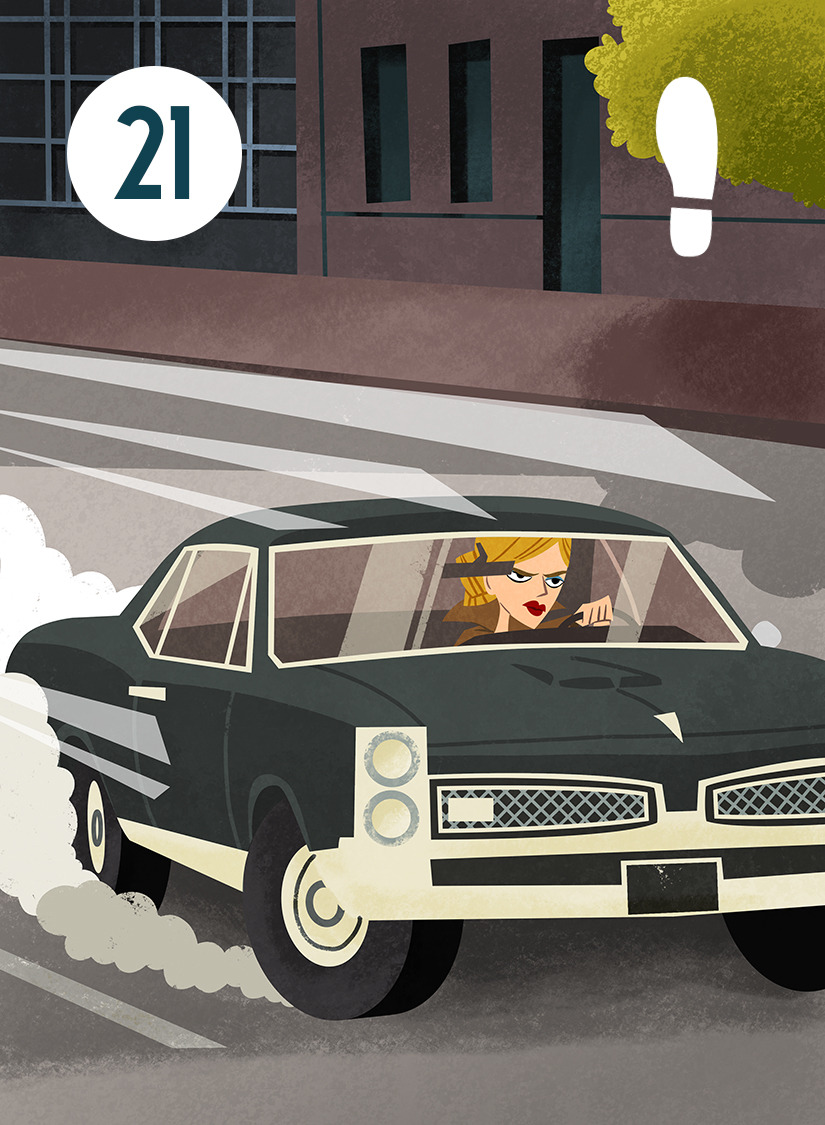 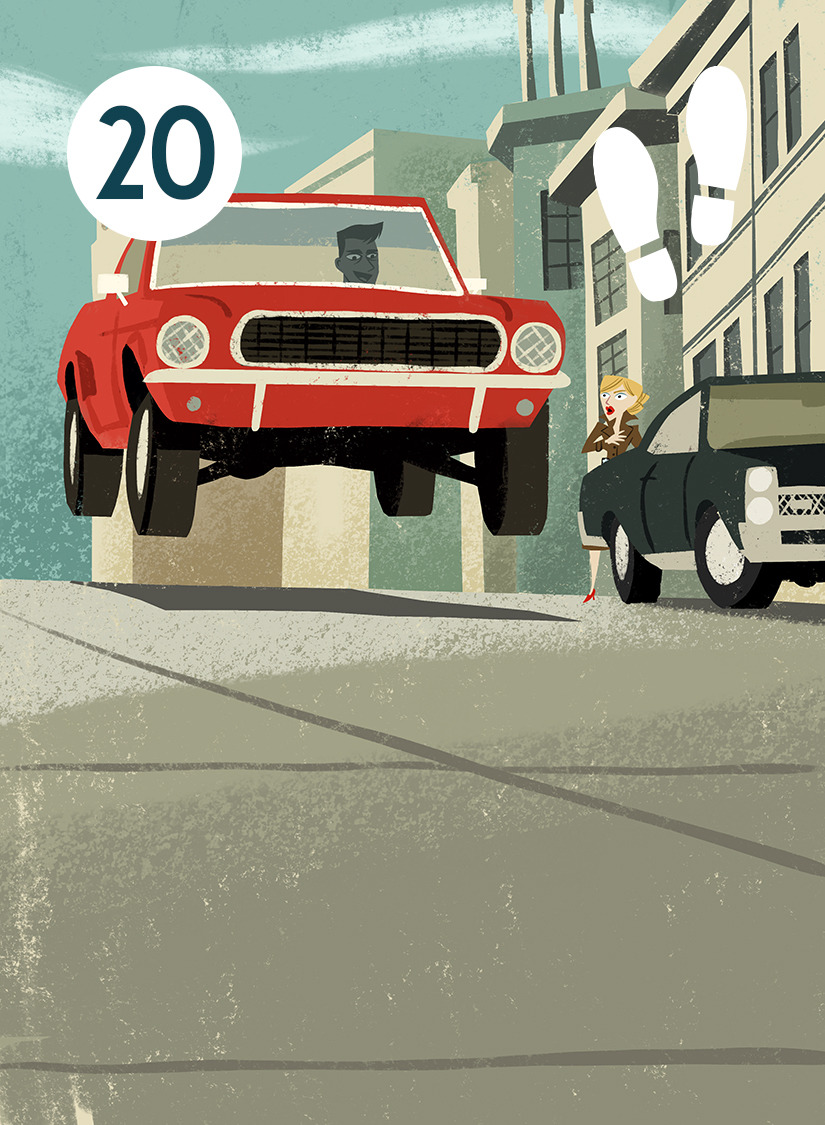 Can you give an advice to any artist jumping into board game art?

My biggest advice would be to make art how you like to make art.  What style or type of art makes you the happiest. Don’t worry about trying to adhere to some particular type of style or format.  There’s already a thousand games out there by a thousand different artists that all look similar. I don’t know if that’s intentional or accidental.  Whatever the case, just be yourself and you’ll stand out.

What currently fuels your creativity?

right now…cartoons.  I’m really into more current cartoons (meaning, not from the 1950s) like Samurai Jack, or Batman the Animated Series…and even new stuff like Over the Garden Wall, Rick and Morty, Venture Bros. etc.

But of course, I often go back to the greats like Mary Blair…dang…she was so good.

Name up to 3 artists you admire?

Where would you direct readers that want to see more from you or get in contact with you?